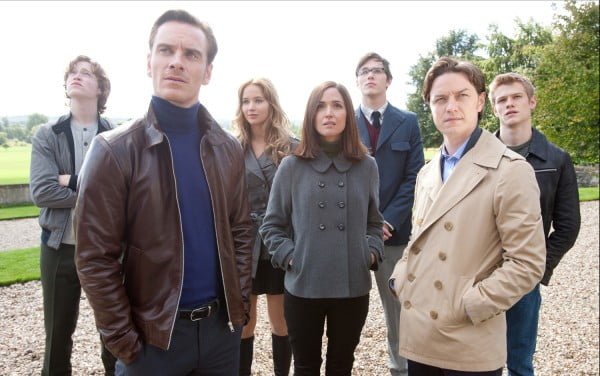 The cast of X-Men: First Class, including Michael Fassbender and James McAvoy

Opening in a theatre near you this weekend: James McAvoy and Michael Fassbender star in the comic book reboot, X-Men: First Class; Owen Wilson stars in Woody Allen’s latest romantic comedy, Midnight in Paris; plus a look at the dramedy, Submarine.

Joining with Moira when Charles realizes that there are dangerous mutants in the world, the trio gathers a team of mutant cohorts as they meet the head of Division X, played by Oliver Platt, where they also join forces with Erik.

Using the intrigue of the Cuban Missile Crisis of the sixties as a backdrop, X-Men: First Class is stylish, witty, and funny, and features a number of cameos, including a brief glimpse of Rebecca Romijn as Mystique, not to mention an equally quick moment with Hugh Jackman as Wolverine.

Vaughn’s film hits all the right points to not only be a fun summer blockbuster, but also a film that fans can appreciate since it very, very faithfully recreates the characters from the original comic books, all the way down to the costumes, and even Beast’s transformation from a brilliant scientist with ape-like feet to a big, blue creature.

In Woody Allen’s latest romantic comedy, Owen Wilson stars as Gil, a Hollywood screenwriter travelling in Paris and looking to find inspiration for a novel, which his friends don’t believe he’s capable of writing.

Walking off on his own one night, and leaving behind his fiancée, Inez, played by Rachel McAdams, Gil finds himself somehow walking the streets of Paris in the 1920s where he meets icons of the past, including Ernest Hemingway, Salvador Dalí, F. Scott Fitzgerald, and Pablo Picasso.

As Gil searches the streets for insight for his novel, he discovers more about himself while also learning a few things that might help him with his relationship with Inez.

Earning glowing reviews from critics, Midnight in Paris looks like your best bet this weekend if you want something just a little more intelligent than rampaging mutants.

As Ann Hornaday of the Washington Post wrote, “Midnight in Paris finds Allen in a larky, slightly tart and altogether bountiful mood, giving filmgoers a movie that, while unabashedly funny and playful, provides a profiterole or two for thought.”

A.O. Scott also wrote for the New York Times, “It is marvelously romantic, even though–or precisely because–it acknowledges the disappointment that shadows every genuine expression of romanticism.”

From director Richard Ayoade comes this dramedy about Oliver Tate, a young boy played by Craig Roberts who is trying to save his parents’ marriage with a plan that involves love letters and a dimmer switch. At the same time, Oliver is trying to impress his pyromaniac classmate, Jordanna, played by Yasmin Paige, who he hopes will take his virginity before his next birthday.

Although Submarine hasn’t received as many positive reviews, the film has a solid reputation as it opens this weekend, and Kyle Smith wrote for the New York Post, “The excruciating and the hilarious mingle nearly to perfection in this marvelously visualized and deeply felt British film…”