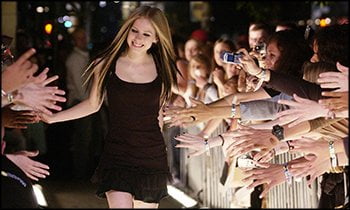 The buzz is growing, the fans are getting revved up, and MuchMusic is prepping their headquarters for one of the biggest parties of the year. Yes, the 2007 MuchMusic Video Awards are just a month away and fans can already cast their votes for their favorite nominees in the People’s Choice Awards.

Descending on the corner of Queen & John every year on the third Sunday of June, the MMVAs have earned the right to be called the coolest awards party in the country. That’s mainly because MuchMusic knows how to throw a party and they always manage to bring in some of the biggest celebrities every year. They also refuse to follow the normal awards show format, so there isn’t a seat to be found in the house.

As the industry and special guests party and schmooze on the inside, the fans take over the street and MuchMusic parking lot, vying for a spot near the red carpet or one of the stages where all the performances take place.

As of yet the list of attendees and performers hasn’t been confirmed, but it’s likely that a number of the People’s Choice nominees will be on hand. (I’m personally betting on the appearance of a Pussycat Doll or two, and at least one of the International artists, like Fergie, but time will tell.)

For information on how to vote, head over to MuchMusic.com where you can view all of the nominated videos. Stay tuned to The GATE for more news, plus we’ll have the inside scoop from the MMVAs, which air on Sunday, June 17th at 7:30 PM (ET) on MuchMusic with additional coverage on Star!, 104.5 CHUM FM, CitytvHD and Citytv.