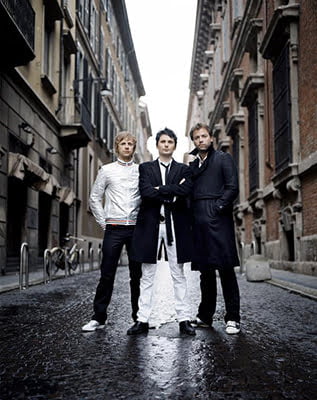 Critics are always raving about bands who they claim are some of the best bands of our era. As a music fanatic myself, I’ve heard some names thrown about for the last few years and I’m sometimes baffled how these supposedly epic acts can release a great record, play their hearts out, and then all but disappear the next year.

Whatever acts you want to rave about, I think I’ve got my own list that’s actually survived the test of time. When I think of greatness I think of bands like The Cure, Aerosmith, Nine Inch Nails, Depeche Mode, U2, and my latest addition: Muse.

On Wednesday night at Arrow Hall, one of the worst venues for a concert in the entire city of Toronto, I had my first chance to see Muse perform and I was more than impressed by their presence, intensity, and sheer talent. Over the last five years I’ve seen a lot of live acts, but aside from The Cure and U2, few have impressed me as much as Muse.

Opening for the band were Cold War Kids, an indie rock four-piece with a progressive sound that I think gets the best showcase on their single “Hang Me Up To Dry”. Their set was good, although perhaps a bit of a hard sell in front of so many intense Muse fans.

The crowd still responded well to the band, but in comparison the crowd went nuts as Muse took the stage. Kicking off with some of their most intense tracks from their new album Black Holes and Revelations, Muse launched into two of my favorites, “Knights of Cydonia” followed by “Map of the Problematique”, and had the crowd bouncing, swaying, and shaking their arms in the air. Packed in as close as they could get, the most hardcore Muse fans barely ever put their arms down throughout the first half of the band’s intense set.

Lead singer Matthew Bellamy raged away on his guitar, with Dominic Howard on drums, and Chris Wolstenholme on bass. On stage the trio cover the stage well, but the light show is probably the most eye-catching element of their act with the entire backdrop providing video and light effects. The band was also joined during this tour by Morgan Nicholls, who works keyboards and guitar.

While the first half of the set was dominated by Bellamy on guitar, the second half consisted mostly of Muse’s piano-driven tracks, including a number of tracks from the new album. The only problem came about half way through the show when Bellamy had issues as he switched over to piano for “Feeling Good”. They eventually got the show back underway, and the crowd had no problem with the shift, but the slower piano-side of the show was a bit of a wild shift from the electric opening. Muse’s sound has evolved so much over the years that I think the shift was a good breather between the opening and closing of the show, but it did take a bit out of the show for me.

Bellamy and crew got back into their groove before long though with “Starlight” and “Time Is Running Out”, which quickly had the entire crowd on their feet again and pushing for the stage.

Wrapping up with an encore that included “Soldier’s Poem” and “Take a Bow” and “Stockholm Syndrome”, Muse were light on chatter – dashing from one song into the next. While it would have been cool to hear more from Bellamy and the rest of Muse, they’re such an intense band that the lack of banter actually just reinforces their epic, intense, and memorable sound.

With Muse rising in fame, it was great to see them hit the stage in Toronto, however I’m hoping that bigger things are in their future and that we might soon see them doing a show at the Air Canada Centre.