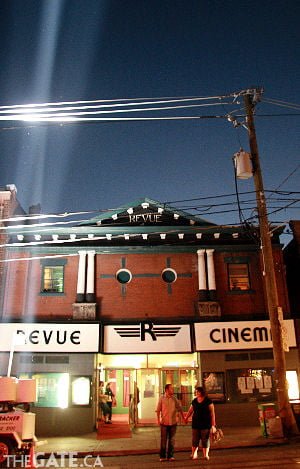 The project has been over 16 months in the making, and even now that it’s practically complete, the campaign has to switch gears for a whole new challenge.

For most people in the Roncesvalles area, the closing of the cinema was more than disappointing, it also felt like a part of the community had disappeared. I’ve personally been living in the area for nearly 10 years now and having the cinema sealed up for so long made the entire street feel completely different.

Thankfully, Roncesvalles is a strong community and when Susan Flanagan, a resident of the area, sent an email about having a meeting to save the Revue, it didn’t take long for people to rally behind the idea.

What followed were months of petitioning, fundraising, and ultimately, community building efforts to bring the cinema back into operation. Besides working to find a way to rent or buy the building, the newly formed Revue Film Society had to reach out to anyone that would help to create promotional materials, and sell the idea of rebuilding the cinema.

Then, on top of everything else, the Revue’s historic marquee collapsed in February.

It was another blow to the group, who at this point still were gathering steam and working to find solutions.

Everything started changing however in June of this year when Danny and Letty Mullin, a local couple with the assets to help out, outright bought the Revue with the intention of renting it out to the RFS. With one problem down, the group was able to concentrate fully on raising the last of the funds they needed to reopen, and to start all of the other plans that were necessary. Volunteers were brought in to help clean up the building, an expert took a look at the facade and offered hope on how best to proceed after the loss of the marquee, and Tim Bourgette was hired to manage the Revue once it reopened.

Thankfully, the Revue opened once again tonight for a special premier that featured a surprise film chosen by website visitors (it was Some Like It Hot), but it’s been a long time coming, and until June it wasn’t always certain what would happen.

What’s really remarkable about the entire project isn’t just that the RFS was able to pull this off, but it has also become a symbol for a community that has grown together. Since the campaign started signs to save the Revue have been in almost every store window on Roncesvalles. Every time the group needed to coordinate something it seemed like there were always businesses looking for a way to help out. And tonight, with the cinema open again and a big after-party planned, people were walking up to the front doors and asking what was playing and when they could catch the next film.

While there are lots of places to see movies in Toronto, there are very few with such a deep connection to the community. There aren’t many that offer such a classic movie-going experience either.

In a quote taken from the Revue Cinema website, Flanagan said “The revitalized Revue embodies the community spirit of the people and businesses that donated time, money and energy to keep it alive. Now, it will be up to the larger Toronto community to shape its future by supporting it not only as a classic movie house, but as an arts and educational facility.”

So this is my call to action for Torontonians: come out for a movie. Get a membership to the cinema ($6 for six months), buy a ticket (only $6.50), grab a popcorn, and sit down for one of the most intimate, original film experiences you’ll find in the city. The Revue offers 244 seats with Digital Theatre Sound, a true silver Cinemascope screen (one of the only ones in the city that can show classic 3D movies), and by supporting a true Toronto landmark for another generation.

If you’d like to catch a follow-up showing of Some Like It Hot, the film plays again at 7:00 PM on Saturday, October 6th and again on Sunday, October 7th at 4:30 PM. More details and the current schedule of upcoming films can be found at the cinemas official website at www.revuecinema.ca. The Revue is located at 400 Roncesvalles Avenue and you can reach them by phone at (416) 531-9959.