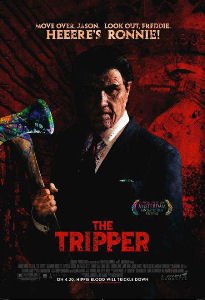 With a mix of short and feature films, the festival will kick off Friday with Mulberry Street, an intense apocalyptic zombie film that’s been praised for the way it blends action, horror, and a political commentary. The opening film will be followed by the official opening night party, which will take place at the Gladstone Hotel (1214 Queen Street West).

Canadian premiers set to hit the festival include Blood Car, Audience of One, The Rebel, Alone, and Simon Says (which notably features Crispin Glover as psychotic twins).

There are also a number of buzz films coming to Toronto After Dark.

Poultrygeist: Night of the Chicken Dead is a bizarre-looking, horror-comedy that bites back at fast food chains with blood, guts, and musical numbers.

In the Name of the King: A Dungeon Siege Tale, a fantasy action film directed by schlock-master Uwe Boll, has the biggest star power at the festival with Jason Statham, John Rhys-Davies, Ray Liotta, Leelee Sobieski, Ron Perlman, Burt Reynolds, Kristanna Loken, and Claire Forlani. Statham stars as Farmer, a reluctant hero only rises to fight a rampaging horde or creatures after his son is killed and his wife is captured.

David Arquette‘s The Tripper has its own share of star power though, including Jason Mewes, Paul Reubens, Thomas Jane, and an appearance by Courteney Cox. It also sounds like a killer slasher comedy, set in the woods during a music festival where the promoter (Reubens) wants to cover up the bloody mess of bodies that are piling up.

The festival also includes the annual Toronto Zombie Walk, which hits the streets of Toronto on Sunday, October 21 starting at 3:30.

Toronto After Dark runs from October 19 to 25 at the Bloor Cinema (506 Bloor Street West) and tickets are already on sale, starting at $10 for regular films, or you can up a VIP pass for $99 to check out the entire festival. Head over to the official website for more information.

The GATE will be blogging from the festival with film reviews, photos, and more.

[…] Festival featuring ‘In the Name of the King: A Dungeon Siege Tale’.Â  Here’s an article from The Gate with the rundown of films starting Friday, October 19th.Â  There will be blogs from The Gate during […]