Film Friday: ‘Horrible Bosses’ and ‘Page One: A Year Inside the New York Times’ 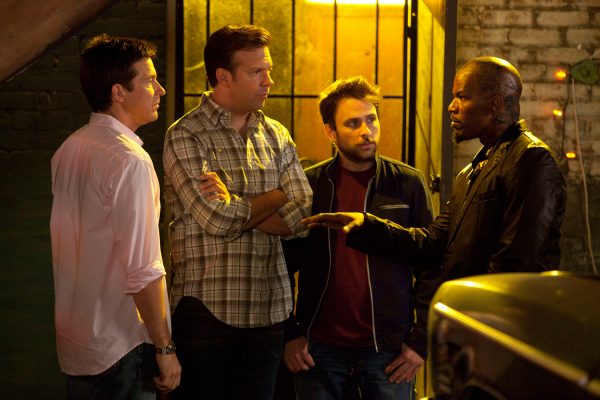 Opening at a theatre near you this weekend: Jason Bateman stars in the would-be killer comedy Horrible Bosses; the documentary Page One: A Year Inside the New York Times delves into one of the biggest newsrooms in America; plus a look at Zookeeper, starring Kevin James.

No matter how old you are or what jobs you’ve had, at one point or another everyone has had a bad boss that inspired dread, fear, and loathing, which is what makes director Seth Gordon’s Horrible Bosses such a hilarious romp.

Featuring three of the worst bosses to step foot on planet Earth, Horrible Bosses asks the question: what if you couldn’t take it any more and had to get rid of your evil boss once and for all?

For Nick, played by Jason Bateman, his horrible boss is Mr. Harken, played by Kevin Spacey, a vicious, conniving overlord who inspires fear in all his employees. Convincing him for months that Nick was about to get a big promotion, Harken then does the unthinkable, absorbing the title into his own job and taking the wage increase with it while he warns Nick that he’s stuck with his job forever.

Meanwhile Dale, played by Charlie Day, is a dental assistant who is about to be married, but his boss is the sexually obsessed Dr. Julia Harris, played by Jennifer Aniston, who frequently takes advantage of the patients and desperately wants to have sex with Dale. For a while, Dale can take it, but when she lures Dale’s fiancé into the office and puts her under for some dental work, while trying to have sex with him on top of her, Julia has finally gone too far.

Finally, there’s Kurt, played by Jason Sudeikis, the happiest employee you could meet, until his perfect boss has a heart attack which propels his horrible cocaine-snorting son, Bobby, played by Colin Farrell, into command. Bobby is exactly the worst person to run his family business and just wants to freeload on the company’s earnings, party with strippers in his office, and fire anyone he considers fat or weird.

Joking at first that the three of them should band together and kill their bosses, Nick, Kurt and Dale quickly realize they have to do something before they turn into simpering losers, and since the job market is horrifying and their prospects are non-existent, the only answer seems to be to go ahead with murder.

Searching for someone who can help them, the trio of friends stumble upon Dean ‘MF’ Jones, played by Jamie Foxx, a man who agrees to be their “murder consultant” to help them get the job done. His suggestion is simple; they should kill each other’s bosses so it’s less likely they will be suspected, which means Nick will take care of Bobby, Kurt has Julia, and Dale has to handle Mr. Harken.

The guys have their work cut out for them, but the worst problem may be that they’ve seriously underestimated Mr. Harken, who could end up getting them all thrown in jail.

Featuring a comically committed, perfect cast, hilarious jokes, and just a hint of spice thanks to the ever-sexy Jennifer Aniston, Horrible Bosses is by far the funniest film I’ve seen this year. Between the screenplay and Gordon, the film moves briskly, but it does miss some opportunities. For one, Aniston is sexy, funny, rude and a great evil boss, but she still feels moderately wasted. Likewise, Farrell is scummy and twisted, but again, not quite as funny as he should have been in this film.

Between Bateman, Sudeikis, Foxx, and especially Day and Spacey, Horrible Bosses springs along at every vengeful step, and keeps the entire mood light and silly, even as bullets fly, someone dies, and the police come in hot pursuit. Whether you hate your boss or not, Horrible Bosses is just plain funny, but you may walk out wondering how Day stole the show from an actor as funny as Jason Bateman.

Following the changes in the American newspaper industry, and as the industry tries to maintain readers as new Internet properties become ever more prevalent, Page One follows writers, editors and publishers as they counter the efforts of WikiLeaks, deal with Twitter, and figure out how to harness readers’ interests.

Taking movie-goers where few films have gone before, Page One is a vivid portrait of the intensity and vitality that keeps newsrooms around the world running, even as chaos constantly threatens to throw everything off track.

Rossi’s documentary, which is the third he has directed, has garnered a fair bit of buzz and approval, and while critics point out that some spark is missing from the tale, Page One has picked up solid reviews.

Lisa Schwarzbaum of Entertainment Weekly wrote, “It’s not quite the same thrill as glimpsing the man behind the curtain of the great and powerful Oz, but for journalism junkies, the fascination of Page One: Inside The New York Times is something like that.”

While Dana Stevens of Slate commented, “Page One, Andrew Rossi’s informative, timely, but never quite revelatory documentary about the financial struggles at the New York Times, has the almost-greatness of an opportunity missed.”

Last, and least of all, a moderately funny Kevin James stars in Zookeeper, a movie about a man named Griffin who is more comfortable around the animals he cares for at the zoo than any of the women he would love to date.

Considering quitting his job so he can do something more glamorous, Griffin is talked out of it, literally, by the zoo animals themselves who reveal they can talk and agree to help him become a real ladies man.

Co-starring Rosario Dawson as Kate, one of Griffin’s love interests, plus the voices of Ken Jeong, Donnie Wahlberg, and Adam Sandler, Zookeeper is easily the biggest dud of the week, maybe even of the year.

“As a study in insanity,” wrote Keith Phipps for the AV Club, “Zookeeper is mildly interesting. But as a kiddie comedy, it’s something to watch only once the little ones have worn out their Dr. Doolittle DVD (maybe even their Dr. Doolittle 2 DVD, for that matter).”

And Glenn Kenny quipped for MSN Movies, “If a worse movie is released this year, I hope I don’t have to see it.”