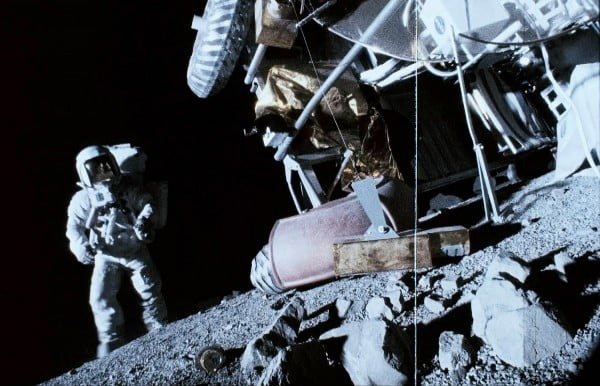 A scene from Apollo 18

Although I hate to say it, fall must be around the corner since both of the major releases this week are horror films intent on drawing in audiences who are done with summer blockbusters and want to be scared as the temperature dips and kids go back to school. The latest in theatres includes the mockumentary horror film, Apollo 18, about two astronauts who may not survive their trip to the moon, and the creature feature, Shark Night, following a group of young friends who may not survive their cabin adventure thanks to a salt-water lake filled with sharks.

Notably, neither film was screened in advance for critics.

You could call it the Blair Witch Project of space films, but whatever you call it, the studio behind Apollo 18 hopes you’ll believe it’s the real story of why no one has been on the moon in nearly 40 years.

Following the last manned mission in 1972, NASA discontinued flights to the moon, but in this horror film two astronauts are sent there once more in 1973 on a secret mission that turns deadly as parasitic organisms start attacking the men.

Discovering the body of a Soviet cosmonaut on the moon, and a deserted Soviet LK Lander, the two astronauts will face this new threat with very little hope of survival, all told as a film that was apparently spliced together from 72 hours of lost footage that was somehow “discovered” by someone online and edited down into this horror thriller.

While the premise is pretty silly, especially since I can’t quite imagine how 72 hours of NASA footage could be found–apparently on the moon no less–and that someone would edit the footage into a thriller, there are some positive reviews from the online community.

“[M]ost of Apollo 18 works,” wrote Hunter Daniels for Collider. “It might be damning the film with faint praise, but it is easily the best Hollywood found footage horror film of the modern era, possibly ever. While the premise overextends itself, there are enough creepy sequences and clever sound tricks to keep viewers alert and there is even a bit of socially relevant subtext that is all the more potent because of the film’s release date.”

Meanwhile, and this is the more common opinion, Drew McWeeny of HitFix wrote, “Apollo 18 stands as one of the worst examples yet of a very, very limited subgenre. It doesn’t matter if this footage was found or manufactured, because the only good thing that could be done with it involves a match and an accelerant.”

People threatened by water-dwelling man eaters should probably stick to dry land, but what do you do if you have an injured friend and need to escape to a nearby hospital, and–oh, yeah–you’re staying on a cabin in the middle of a salt water lake?

This is the premise of the dreary Shark Night from director David R. Ellis who pits a small group of young, attractive friends against a lake filled with sharks.

After the friends arrive for a bit of relaxation, the group is enjoying themselves on the picturesque Louisiana lake, at least until their friend loses his arm in a freak accident they can’t quite explain. As it turns out, the explanation is simple enough, someone has released hundreds of huge sharks into the lake and it’s apparently feeding time.

Aside from horror junkies, the film is unlikely to have people rushing out to theatres, and it looks like the few critics who have seen the film agree that it’s not worth your time or money.

Critic Brian Orndorf wrote on his website, “What’s actually here is depressingly unimaginative, artificial (the shark CGI is iffy at best), and occasionally distasteful. Trust me, it’s one long night.”

Here’s a look ahead at some of the films opening in September, including films debuting at the Toronto International Film Festival, and unique releases like the Pearl Jam documentary, Pearl Jam Twenty, opening on September 20, and Kevin Smith’s political horror film, Red State, which plays across Canada for one night only on September 29.