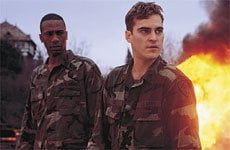 War movies usually aren’t my thing. Even movies like Born On The Fourth of July or Patton didn’t really do anything for me, but when I saw that Buffalo Soldiers had Ed Harris, Anna Paquin, and the very talented Joaquin Phoenix (who always looks strung out to me), I had to see what the movie was all about.

Turns out, Phoenix looking strung out was perfect for this movie, considering it’s all about the drug trade on the dark side of the U.S. army. Which ends up being the perfect backdrop for this noirish film, and it works well for the cast as well. It’s just a shame that some of the acting is way beyond saving. Harris and Paquin in particular could have been placed inside a volcano and they still would have came off cool and sleepy eyed.

As we get introduced to the scenery and the events in West Germany, it becomes pretty obvious that the army is bored and not serving any real purpose. Right off the top, we see a group of guys acting all macho and playing a little game of football in one of the main rooms inside the army compound and someone ends up getting killed. This sets up the rest of the film, showing the audience just how careless this group of guys are and it also lets you in on the dark comedy of the film when you see the body unceremoniously dumped out a window.

From there, event after event unfolds and we become familiar with Phoenix as Ray Elwood, a smart guy with lots of connections, but no real concern for his own skin. He just seems to want to play the game, have his drugs, and enjoy the ride. There’s also an interesting opening bit about Elwood that explains a few things about his character that ends up being a big part of how the movie climaxes, but it also seems a little tacked on.

We then get introduced to Harris who plays Col. Wallace Berman, Elwood’s commanding officer and a generally slack, unlikely officer who gets along by pure luck rather than actual knowledge or instincts. Harris plays the role as best he can, I guess, but like a lot of the other actors in Buffalo, he comes off completely empty and boring rather than like a worn-out old Colonel. Compared to what he did for Apolo 13, his work here barely comes in on the radar.

Slowly, the rest of the cast files in and we meet Elwood’s new nightmare, Sgt. Robert Lee (played by Scott Glenn). Seems too many strange things had happened at once and Berman suspected that drugs were somehow getting to his men, so he called in Lee to clean up the mess on his base. Glenn plays this part perfectly and you can’t help but instantly hate the guy, but he was perfect for the role and his pivotal role in the film works out really well, even if the part about his daughter seems quite unnecessary.

So yes, he has a daughter named Robyn, who is played by Paquin. She ends up being the only real female in the film and she doesn’t even do her gender justice. The script for her parts in the film weren’t that inventive and she definitely didn’t need to be in the film at all, but not all of that is her fault. I’m sure with a different kind of character she might have done better, but as it was, I could have gladly gone without any of her work in the film.

Generally, this isn’t really a war movie at all, only the setting is part of the usual war movie model, and the obvious military elements lend a hand. Instead, this is a story about the real root of evil in men and where boredom can lead a country’s saviors to their worst deeds. This point seems particularly driven home as we see the Berlin Wall come crashing down. The moral of the story seems to be that even when there is no enemy to fight, certain people will always find conflict and struggles to deal with.

Elwood and Lee are those kinds of people and they quickly find that fighting each other is all consuming and even a little fun… it’s like a macho face-off. The best scene for this is when Lee has a squadron of men, including Elwood himself, shoot his own car into the dust. Or even when Elwood makes out with Lee’s daughter, right outside his home as Lee is watching.

There’s just one other strange thing about Buffalo Soldiers, and that’s the style of the film. Every time something happened, like Berman challenging another Colonel to a mock battle, Lee having Elwood’s car shot up, or any of the other kinds of “pranks”, I kept feeling a little reminded of those old Police Academy movies. The feel of this film is darker of course, and more of a drama than Police Academy, but all of the comic bits, especially the drugged out guys in the tank rumbling through a nearby city, just felt too much like the stuff you’d see Mahoney do to Lieutenant Harris as Commandant Lassard watched. Funny as hell, but just a little weird at the same time.

Anyway, this was a good film, but it just wasn’t all that it could have been. Some of the imagery from Elwood’s dream could have been used better, the jokes and stunts could have been better, the cliche stuff should have been gutted out and remade, and Paquin could have had a real part that meant something to the story, instead of being there to be stared at for the girlish image she always seems to portray.

Either for good or bad, at least I enjoyed this movie more than Born On The Fourth of July. Perhaps that’s why this is more of an escapist kind of war movie, instead of being a completely honest look into the military.