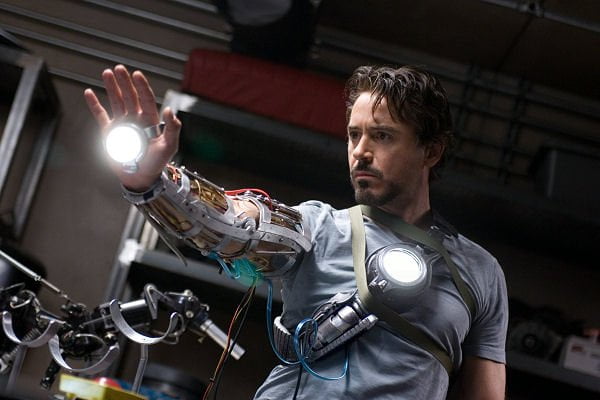 Soon to be franchise superhero Iron Man makes his big DVD debut this week, with Robert Downey Jr. filling out the ego and the charm of this incredibly cool character. Also coming to shelves this week is Judd Apatow‘s comedy, Forgetting Sarah Marshall, with Jason Segel as another loser dealing with his empty life.

Iron Man
The Marvel versus DC comics debate has been going on for a long time, and although it’s hardly decided, the battle now appears to have moved into a much larger format. With superhero movies raking in millions of dollars worldwide, both sides are popping out their most popular, or at least interesting, heroes. The latest Marvel entrant on the field may not be as popular as a certain caped crusader who dominated the box office this year, but he’s certainly one of the coolest characters to date.

Robert Downey Jr. stars as genius playboy billionaire Tony Stark, the head of one of the world’s greatest weapons manufacturers, wounded and captured while showing off his latest weapon to army big wigs in Afghanistan. After a near-fatal explosion, a captive surgeon installs a magnet in Stark’s chest to keep fragments of metal from entering his heart and killing him. At the same time his captors expect him to make a weapon they can use against their enemies.

Stark turns the tables on the warlord and his men though, creating a suit of armour to make an escape, which also leads him to rethink his role in the world.

While the film follows the usual “making of a superhero” template, Iron Man is just a little bit different. Downey makes Tony Stark a credible playboy, teeming with acerbic wit, and as Iron Man we’re not faced by the usual alter-ego personality. Stark clearly puts on the suit to do what he thinks is right, and he doesn’t feel the need to hide behind his mask.

Adding both wit and charm to Iron Man is a fun turn by Gwyneth Paltrow as Stark’s assistant and only companion, while Terrence Howard and Jeff Bridges deliver all the machismo possible. Bridges, fits the role of Obadiah Stane very well and is a genuinely cool character, especially since he has to counteract Downey’s massive personality.

Iron Man ends up being an incredibly easy to watch hero movie because it doesn’t get bogged down in too many details, and it has the perfect lead star. On the down side, the story is fairly weak, so the film is really held together by Downey, and could have been a monumental flop without his brilliant performance.

The special two-disc edition of the DVD comes with a lot of very watchable extras, the best being the incredibly long “I Am Iron Man” which looks at the films production starting six months before filming and going all the way through to the film’s red carpet debut in Hollywood. There are countless great moments, but perhaps none greater than when Robert Downey Jr. says the word “nerd-gasm.” It’s also eye-opening to hear director Jon Favreau talk about how he envisions the flight sequences, and how they should make people feel.

Forgetting Sarah Marshall
There is something oddly memorable about producer Judd Apatow and his ability to make even the stupidest things funny. With the success of the 40-Year-Old Virgin, Superbad, and Knocked Up, Apatow is the man to beat when it comes to comedies, and Forgetting Sarah Marshall may not be his greatest, but it’s up there.

Peter Bretter (Jason Segel) is a down-on-his-luck musician who gets dumped by his movie star girlfriend, Sarah Marshall (Kristen Bell), and can’t cope with the idea of living without her. After a string of meaningless sexual adventures and a nervous breakdown, he eventually realizes that it’s time for a vacation, which leads him to Oahu where he runs into, who else, but his ex and her new weirdo musician boyfriend, Aldous (Russell Brand).

With appearances by Apatow’s usuals, including Paul Rudd, Jonah Hill, and Bill Hader, the film is being billed as “the world’s first romantic disaster comedy.” While note quite as funny as, say, Superbad, the charm of Apatow’s hilarious films is not just the way he pulls off comedy, but the clever, engrossing characters, and the way the stories are abundantly sweet and charming.

Ten years after it debuted, Aaron Sorkin’s brilliant, and under-appreciated series, Sports Night lands on DVD. Featuring an incredible cast, including Felicity Huffman, Peter Krause, and Sabrina Lloyd, the show still ranks as one of my all time favorite series for its clever writing, characters, and performances. If you’re tired of the usual sitcoms and never saw this show, do yourself a favour and check this one out. The set includes both seasons, and a number of bonus features that look at the making of the show, not to mention commentaries, and a gag reel.

Also out this week is season four of Numb3rs, the third season of My Name Is Earl, volume two of the Best of Mr. Bean, and season two of the old classic, Adam-12.