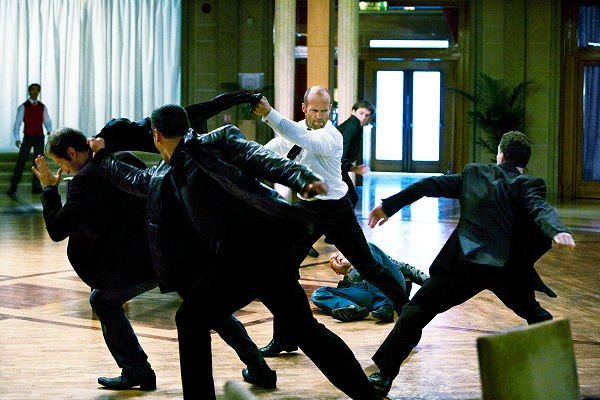 Canadians get an early gift this week as American Thanksgiving pushes all of the new releases to Wednesday. Debuting a bit early this week, Transporter 3 has Jason Statham muscling his way across Europe with a “delivery” in tow, an epic romance blossoms between Nicole Kidman and Hugh Jackman in Baz Luhrmann‘s Australia, while Four Christmases copies the usual lame Christmas comedy routine. And the only truly great release this week has Sean Penn starring in Milk, about the life of Harvey Milk.

Transporter 3
Who knew that couriers had it so bad? In the third installment of the Transporter franchise, Jason Statham is back as the no-nonsense Frank Martin, a professional, high-end “transporter” who will deliver anything, for a price. And it seems like there are always lots of people who don’t want him to get where he’s going.

In the latest adventure, Frank is forced into taking Valentina (Natalya Rudakova), the kidnapped daughter of the Ukraine’s Environmental Protection Agency, from one end of Europe to the other, all the while hooked up to a device that will kill him if he moves more than 75 meters away from his car.

Fighting off a veritable army of goons along the way, and trying to keep Valentina from escaping, Frank will once again have to prove why he’s the best at what he does. Maybe with just a little help from his friend, Inspector Tarconi (Francois Berland).

The reviews are not exactly all fantastic at this point, but some of my favorite writers seem to get what the franchise is all about. As Lisa Schwarzbaum wrote for Entertainment Weekly, “[Transporter 3] makes good on its formula with no pretensions.”

Australia
On the other end of pretension comes Baz Luhrmann’s big, bombastic Australia. Starring Nicole Kidman as a rich English woman stuck in Australia during World War II, the story is an epic war romance that has Hugh Jackman playing the neighbourly love interest who tries to help Kidman’s character from Japanese forces.

While there seemed to be a lot of buzz before the film was released, even suggesting some Oscar potential, the film is getting anything but glowing reviews.

“Baz Luhrmann’s entertaining Australia simply must be watched on the biggest screen possible,” Moira MacDonald wrote for the Seattle Times, “as I imagine it becomes sillier and sillier as it shrinks.”

Erring on the side of the more welcoming critics though, I can’t help but bring Todd McCarthy from Variety into the discussion.

Four Christmases
But the real bomb of the week is the latest holiday film that pairs Reese Witherspoon and Vince Vaughn as a couple trying to endure four separate Christmases, since both of their parents are divorced.

While I’d like to give both of these actors the benefit of the doubt, there is no missing the stench of this film, which suggests both actors may need to start choosing their scripts a bit more carefully.

“The movie tries to be a feel-good holiday movie, but it’s too vulgar to take the whole family to and too silly to charm sophisticates,” Dezhda Gaubert wrote in her E! Online review.

Meanwhile, Jenna Busch of UGO seems to be sharing my brainwaves a little bit. “Must everyone make a Christmas film every year? Must it be the same story over and over again? This is why we have the Hallmark Channel. Listen, if your film is not Elf or Bad Santa, I’ve seen it.”

Milk
Last, but certainly not the least, Milk also debuts in select theatres this week and reveals the real-life drama of Harvey Milk, the first openly gay man to be elected into public office in the United States of America back in 1977.

Sean Penn stars as Milk in this politically driven drama by Gus Van Sant about a man who fought for his rights, and became a hero. The film also co-stars James Franco, Emile Hirsch, and Josh Brolin.

Oscar buzz is naturally starting to get a lot louder as Hollywood once again takes notice of Penn in another of his genius roles.