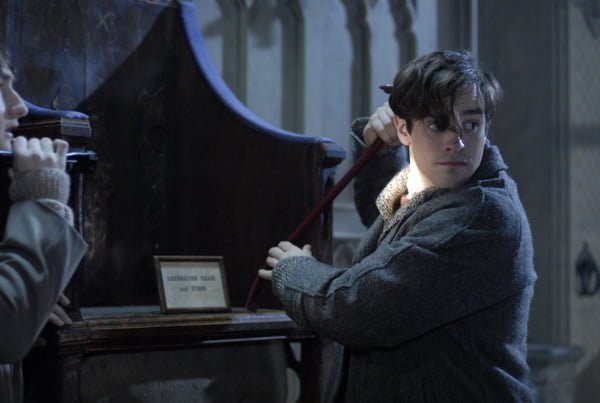 Charlie Cox in Stone of Destiny

Coming to theatres this Friday, Stone of Destiny takes a look back to 1950 when three young, Scottish nationalists tried to steal the Stone of Scone from Westminster Abbey. Also opening, in Fired Up, two high school students ditch their football dreams for the wonders of cheerleader camp, and Tyler Perry returns with the film version of his play, Madea Goes to Jail.

Directed by Charles Martin Smith, Stone of Destiny stars Charlie Cox, Kate Mara, Billy Boyd and Robert Carlyle. The cast is a good mix of actors, who all contribute to the story, but there is no missing the film’s rather weak script. At just over an-hour-and-a-half, Stone of Destiny is not overly long, but it drags every step of the way.

Michael Rechtshaffen of the Hollywood Reporter called Fired Up, “An over-cranked teen comedy that only travels so far on its one-gag premise,” but are you really surprised?

In this made for teens film by first-time director Will Gluck, two high school guys (Nicholas D’Agosto and Eric Christian Olsen) ditch football camp for their dream experience: cheerleader camp. As the only two guys with this idea, this of course gives them access to a camp full of beautiful women, but what happens when one of them falls for the head cheerleader? Or when the two guys need to actually help make it into a cheer competition?

If you need a cheap laugh this weekend, or are under 20, Fired Up is probably your best bet in theatres this weekend, but I personally can’t imagine actually paying money to see this film.

With an 80s-inspired title, if I ever heard one, which reminds me of the time Ernest was headed to camp, and despite a critical history that would make Alan Smithee flee in terror, Tyler Perry is back with another story of that mean-spirited grandmother, Madea.

Sent off to jail thanks to a car chase on the highway, and her unfettered anger, Madea’s family rallies to set her free upon the world once more. While she is locked up, however, Madea takes a young prostitute under her wing, as an assistant district attorney works on the woman’s case.

While I am no fan of Perry’s work, the man has quite a following. A following that apparently accepts him for who he is, and whether or not he can actually make an entertaining film. Based on a lack of early reviews, I can’t say if I’m being fair or not, but with his track record I’m betting this will be more of the same.

In other words, if you enjoyed some of Perry’s previous films, like The Family That Preys, Meet the Browns, or Why Did I Get Married?, maybe you’ll like this one too.