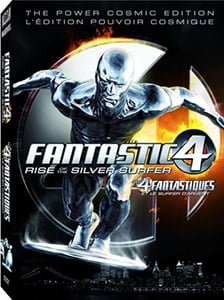 Fantastic 4: Rise of the Silver Surfer
Superhero movies have come a long way in just a few years, but you probably wouldn’t know it from watching a film like Rise of the Silver Surfer. In the Fantastic 4’s latest adventure, the team of heroes faces off against the Silver Surfer, alien who has come to our planet to prepare it for destruction. The film looks good, with decent effects, and the cast includes Ioan Gruffudd and Jessica Alba, not to mention the voice of Laurence Fishburne as the Silver Surfer. On the other hand the story is boring, lacks punch, and feels a bit like it was thrown together with the help of a marketing team and producers, rather than talented script writers.

The Jungle Book
Disney’s The Jungle Book arrives for the first time on DVD this week, and to this day it stands out as one of the company’s great animated musicals. The film was the last to be supervised by Walt Disney himself, and between the songs, the characters, and the classic animation, the film is pure Disney at the height of their best years. The story follows Mowgli, a boy raised by wolves, who has to decide between staying in the jungle with his animal friends or finding his way to live with humans. A great movie to introduce to your kids, or for animated film fans.

Misery, 1408
Stephen King has penned numerous books, and short stories over the last 30 years, and a number of them have been transformed into great films. This week you can pick up two movies based on his stories, although they both differ vastly. On the one hand there’s 1990’s Misery, starring James Caan as an injured writer trying to escape his greatest fan, Annie Wilkes (played to Oscar-winning perfection by Kathy Bates). The film is a tense, disturbing portrait of an obsessive fan and it’s all the more enjoyable for the way Caan and Bates play off of each other.

Also out this week is 1408, a horror film that stars John Cusack as Mike, a paranormal travel writer who finds out about a hotel room that is apparently so haunted that nobody has lasted more than an hour inside the room, and dozens of people have died within its walls. Richard Roeper of Ebert & Roeper sums the film up: “This isnâ€™t a horror movie about… screams and yells, it’s more like chills and little moments of revelation.”

Some of the television titles available on DVD this week include Criminal Minds, season two; How I Met Your Mother, season two; Jericho, season one; CSI Miami, season two; and the complete Star Trek: The Next Generation.