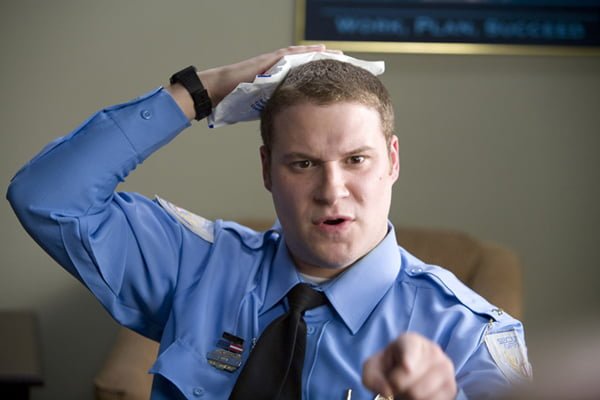 Seth Green in Observe and Report

New in theatres, Seth Green plays an aspiring rent-a-cop hoping for a chance at being a real cop, if he can just catch the flasher terrorizing the mall. Also opening, the new Hannah Montana movie, the action adventure Dragonball Evolution, and a look at a recent release, The Story of Anvil.

Observe and Report
Earlier this year we met Paul Blart, a mall cop on a mission to save the day, and now comes Ronnie Barnhardt, the latest rent-a-cop to take on the terrors of the shopping centre.

Everyman Seth Green is our intrepid security guard, dealing with the everyday issues of the mall, but his heart lies with loftier aspirations of becoming a full-fledged police officer. All he has to do is prove himself enough to earn a spot with the local police academy, and when a flasher starts terrorizing his customers, Ronnie sees his chance to prove himself. All the while he also dreams of picking up Brandi, played by Anna Faris, a mall employee who doesn’t even notice that he exists.

Observe and Report was written and directed by Jody Hill, who made his mark with the comedy The Foot Fist Way. Reviewers are giving this R-rated film favourable reviews, although not to the point where I would call this the latest Superbad.

Christy Lemire of the Associated Press described Observe and Report by calling it, “A series of hit-and-miss non sequiturs in which [the] characters mostly humiliate and injure themselves and others.”

David Edelstein of New York Magazine gave a more favourable review, noting that “Observe and Report is the rare ‘action-comedy’ (almost always a muddled hybrid) that earns its cathartic climax.” Adding, “but somehow – the magic of comedy – it’s also uproarious.”

For me, the funny aspect once again is that we’re seeing two similar films coming out mere weeks apart. It is the equivalent, in comic terms at least, of Armageddon versus Deep Impact, two big movies which came out months apart and featured a similar idea, told in two very different ways.

Plus, will fans be ready to pay more at the box office to see another wanna-be cop movie set in a mall? More than likely, it won’t matter, and with Rogen starring, it really can’t hurt the film’s chances at all.

Hannah Montana The Movie
She’s back again, but this time, Miley Cyrus is doing a little acting in a musical adventure that has her and her father, Billy Ray Cyrus, visiting Tennessee for a little fresh air. Not to mention a chance for Miley to clear her head from the insanity of her stardom.

There is really not much else to say about a Hannah Montana movie, in my mind, except that if you have young fans in your home, you should probably make plans to take them or you’ll never hear the end of it.

Michael Rechtshaffen says it best in his review for the Hollywood Reporter; “Hannah Montana goes more than a little bit country for her first (nonconcert) big-screen outing, and the resulting Nashville/bubble gum fusion doesn’t necessarily represent the best of both worlds… Not that the tweens will mind the twang.”

Although I’m sure fans of the series will be interested in checking out this big screen adaptation, I’m dubious that there is much in the film for anyone new to Toriyama’s storyline.

Orlando Parfitt of IGN Movies UK backs that theory of mine up in his review, calling Dragonball Evolution “a charmless, somewhat cynical attempt to cash in on one of the most beloved anime franchises of all time.”

But it’s worth noting that a few critics were a bit less jaded about the experience. “Dragonball Evolution doesn’t take itself too seriously,” Russell Edwards of Variety wrote, “but avoids campiness.”

“Anvil: The True Story of Anvil is only 80 minutes long,” Liam Lacey wrote for the Globe and Mail, “but it packs a lifetime worth of drama, setbacks and especially friendship into its brief running time.”