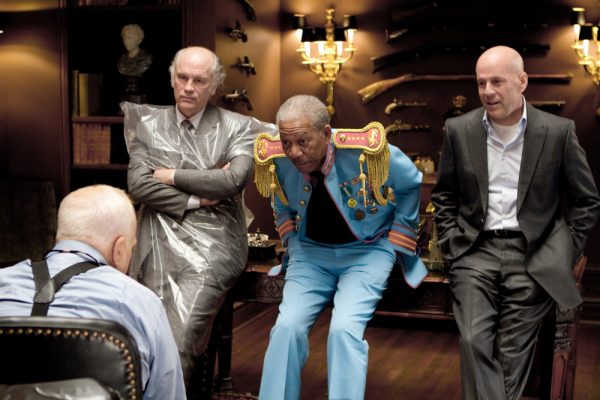 Following Frank to begin with, as he uproots himself and goes off in search of his friends and a call centre employee he’s been wooing long-distance, Red is a funny, self-deprecating, big-bang adventure down the memory lane of yesterday’s action movies. It’s hard not to smile as Mirren kicks butt in combat boots, or even as Willis and Freeman rough thugs up in the name of laughs, rather than the usual blood sport.

Best of all though, Red pokes fun at the idealized image of Hollywood’s obvious ageism with a cast of actors that are quite simply perfect for these roles.

Directed by veteran filmmaker Randall Wallace, who also directed We Were Soldiers and The Man in the Iron Mask, the film is exactly what you might expect from a Disney drama, and while I say that with some condescension, it’s also with a hint of praise. Disney reliably delivers these inspirational dramas again and again, and Secretariat has received a fair amount of praise from critics for that reason.

The Saw franchise is apparently unstoppable.

No matter how many bad reviews the film receives, there is still just enough fan interest to keep this long-dead horror series from ever reaching a total conclusion.

That makes reviews of the film almost entirely pointless, but for anyone who pays attention to such things it’s no surprise that the film has received near-total disdain from major critics.

Edward Douglas of ComingSoon.net pretty much sums up the general response, commenting in his review, “The combination of convoluted storytelling and often gruelling-to-watch death traps will make you say, ‘Thank God that’s over!’ wrote Douglas, “and you may as well be referring to the entire franchise at this point.”

In the third and final film adaptation of Stieg Larsson’s well-known thriller novels, Lisbeth is back, played once again by Noomi Rapace, recovering in a hospital as she waits for her trial for three murders. Meeting with her father, and plotting her revenge against those who have wronged her, it’s up to her friend and comrade Mikael Blomkvist, played by Michael Nyqvist, to try to defend her in court and discover why Swedish officials seem to have it out for the young, troubled hacker.

Compared to its predecessors, it’s clear the franchise has constantly slipped since the first film. This latest adaptation is by far the worst reviewed, coming in at just 52% Fresh at RottenTomatoes.com.

Betsy Sharkey of the Los Angeles Times was quite positive about the film though. Sharkey wrote, “An extremely satisfying ending to the story of Lisbeth Salander, the tough Swedish cyber punk that actress Noomi Rapace has turned into an iconic New Age heroine.”

While Owen Gleiberman of Entertainment Weekly wrote, “The Girl Who Kicked the Hornet’s Nest is mostly an epic rehash of the tale Larsson has already told, and that makes it, at two hours and 28 minutes, the first movie in the series that never catches fire.”