Oscars in the new age 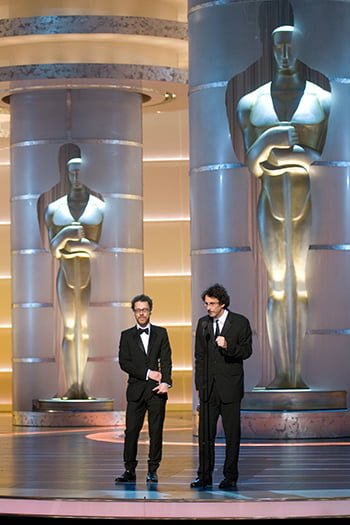 This 80th anniversary edition of the Academy Awards, the stripped down, but still over-long post-writers strike Oscars were interesting to say the least. A lot of geeky pundits were praising the great year Hollywood had in terms of the strength of the material on display, but I would argue the opposite. What was on display at the Oscars was not just the best Hollywood had to put forth, it was all they had to put forth. But, that was okay because what won actually richly deserved to win. The only surprise to me was the Best Supporting Actress nod to Tilda Swinton – she is a fine actor but she wasn’t overly impressive in Michael Clayton.

Host Jon Stewart did his usual remarkable job – he is somewhat out of place there though. Known for his political satire he seems a funny choice for the Academy to choose as a host – other than the fact that he is a hugely popular TV personality of course. But he carried the show forward with wit and intelligence (I loved his jab at Vanity Fair after they cancelled their lavish post Oscar party out of “respect for the striking writers” – to which Stewart quipped, “if they want to really show the writers respect they might actually invite some of them to the party.”)

When it is all boiled down to facts and figures it can be said that The Bourne Ultimatum was the biggest winner of the year – three nominations, three wins. And that was cool – that movie was the smartest and best action movie of the year and was technically superb. No Country For Old Men won the big three for the Coen Brothers – Adapted Screenplay, Director, Picture (as well as Javier Bardem for Best Supporting Actor) and that was no surprise – the movie, while dark and violent, is also extremely good. The acceptance speeches of the Coens reflected their complete and utter detachment from the systems that was all glitzed up for an evening of patting each other on the back. They were respectful but looked awkward and uncomfortable at the same time.

Daniel Day Lewis won what was probably the only virtual sure thing of the evening for Best Actor – his riveting, towering performance as oilman Daniel Plainview in There Will Be Blood was one of the best screen performances in an American movie period, not just this year. It would have been just as valid for that film to win Best Picture and Best Director (for Paul Thomas Anderson) and Best Supporting Actor for the overlooked Paul Dano.

Much has been made the day after about what a shock the win by French actress Marion Cotillard but again I take an opposing view – La Vie en Rose was an extraordinary movie – and Cotillard was astounding as the complex and troubled French singer Edith Piaf – her physical transformation and commitment to this role was every bit as muscular as the work done by Daniel Day Lewis in There Will Be Blood. The work done by the writer and director of that film – Olivier Dahan – was equally deserving of notice and the movie itself deserved a Best Picture nomination as well. These are not emerging talents – these people are highly accomplished screen veterans – so it is righteous that she be recognized for her fine work.

Canadians didn’t fare as well as hoped – remember, while we seem to look at Juno as a Canadian movie it really isn’t – screenwriter Diablo Cody, who won for Best Original Screenplay, is actually a Chicago born, Minnesota raised woman. Jason Reitman, the Oscar nominated 30-year-old director has spent more time in LA and Malibu than Canada no matter what his passport says. I thought for an instant before the ceremony started that Juno might pull a Best Picture upset the way that Crash did or Chariots of Fire did – but early into the proceedings I knew that would not be the case.

So all in all these Oscars may go down in the history of the Academy Awards as one of the finest in terms of winners all deserving their recognition for their work in the films they were nominated for (not for popularity, or for longevity, or for the work done by their production company’s marketing department).

My favorite moment above and beyond the awards – when the cool Irish rake of an actor Colin Farrell came out to present and slipped on something on the floor – he caught himself then retraced his step and took a running slide on whatever it was up to the podium – he smiled and pointed to the slippery floor and just said, “somebody might want to do something about that.”

I hope something was learned by these Oscars that almost weren’t. But probably not – next year it will be right back to big silly inappropriate song and dance numbers and silly in jokes about the people in the audience. I just hope the Academy is smart enough to bring Jon Stewart back for another go.