Oscar season is for movie lovers 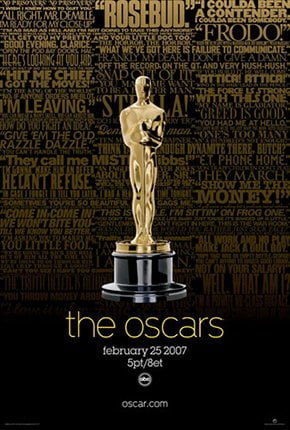 Welcome to party season – that special time of year when celebrities descend on Hollywood for a few welcome pats on the back in the form of a little golden man. Yes, it’s Oscar season, and once the Golden Globe Awards wrap up tonight the only thing left to do is wait for the nominations to drop for the 79th Academy Awards.

The 2007 Oscar nominations get rolling on the morning of Tuesday, January 23, 2007 from the Academy of Motion Picture Arts and Sciences’ (better known as AMPAS) Samuel Goldwyn Theater. The awards will then be handed out on Sunday, February 25, 2007, at the Kodak Theatre in Hollywood. This year a total of 307 films were eligible to compete – all they had to do was open in the Los Angeles area sometime in 2006, and run for at least seven days.

That, and well, earn the respect of enough eligible Academy voters to make it into the nominations. All 5,830 voting members had until this past Saturday, January 13 to get their ballots in and now PricewaterhouseCoopers counts everything up, using the Academy’s rules, to come up with the final nominations list.

Some top films already getting a lot of buzz include Babel, The Queen, and The Departed, just to name a few. And of course a lot of critics and filmmakers alike will be watching what happens at the Screen Actors Guild Awards to get a better idea of who might win some of the key acting awards.

But as a film nut there’s just no escaping the presence of the Academy Awards as an event. It’s a spectacle that reminds at least some of us what an experience a movie can be. Set aside the egos, the piles of money, and the screaming fans and you have the best part: movies that make you shiver, laugh and sob your heart out.

This year’s Oscar poster also symbolizes that concept quite nicely with dozens upon dozens of the most memorable lines from Academy Award nominated films between 1936 and 2005. Specifically, they’re all films that were nominated for Best Picture or Best Writing… all except one. According to the press release, movie buffs should get a kick out of finding the one exception. (You can buy a poster by visiting www.oscars.org/publications/ or by calling 1-800-554-1814.)

Stay tuned to The GATE’s News (www.thegate.ca/news/) and Oscar File (www.thegate.ca/oscars/) for more Oscar coverage. We’ll have predictions, the full list of nominations, and full reports on the big event.