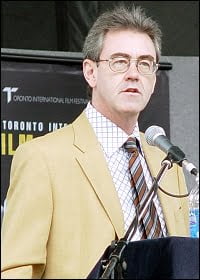 The 30th edition of the Toronto International Film Festival is now locked and loaded and ready to be blasted out over this city come September 8th. Festival bosses Piers Handling, Noah Cowan, and Michelle Mahieu were on hand this morning (August 23) at Nathan Phillips Square to make the final gear up announcements.

This was the third and final press conference at which the last few major announcements are made and a very long, long list of festival guest stars is read. Experience shows that only about sixty percent of those announced actually come, but that is not a rap against the festival, if anything the opposite is true.

When a film is accepted in the festival virtually everyone involved who is invited wants to be in Toronto, but when the festival rolls around some are on locations or otherwise engaged, but everyone really does want to be here.

As I tried to juggle the free popcorn and Diet Pepsi courtesy of festival corporate sponsors (online DVD renters Zip.ca provided the popcorn) I scribbled notes down of things that jumped out of the announcements at me that were must-sees — one was the announcement of a film in the Special Presentation category — Oliver Twist from director Roman Polanski starring Ben Kingsley in what is being described as one of the best things the distinguished actor has ever done. And the combination of Polanski and Dickens is almost too surreal to imagine.

In the Masters series it was announced that Martin Scorsese will bring his heartfelt feature documentary No Direction Home: Bob Dylan to the festival — Scorsese has done a music documentary before with brilliant results, the film on The Band’s final concert called The Last Waltz.

A couple of interesting filmmakers that I have met and interviewed in the past are returning with films that I am eagerly anticipating — one is the return of Guy Ritchie, whose film Lock, Stock and Two Smoking Barrels, and Snatch I loved and then he stepped into the “Mr. Madonna” role and had to make Swept Away starring his wife — which was one of the worst films in its or any other year. Ritchie is back in the hard-boiled genre with Revolver.

Master photographer Larry Clark, whose controversial Kids put him on the cinematic map, is back with Wassup Rockers — a film about skaters and slackers. When I last interviewed Clark at the film festival a few years back he came into the room looking like he had been on a three day bender with a skateboard under one arm and a bag from the LCBO under the other — a real character, something cinema could use more of these days.

There is a special program of films that is worth noting — several filmmakers have made tribute films to the late Dutch filmmaker Theo Van Gogh (yes, he is a direct relative of that Van Gogh) who was assassinated right on the street in Amsterdam after making a controversial film about women’s rights in the Muslim world. The last film Theo Van Gogh made before being killed will also be unveiled at the film festival.

But if I had to pick one performance of all those announced that I am looking most forward to it is that of Phillip Seymour Hoffman playing the mercurial, brilliant, but ultimately demon-plagued writer Truman Capote in Capote.

In closing, here are a few quick facts — this year’s festival will screen a record-breaking 335 films — the longest being 201 minutes, the shortest being 3 minutes. There will be 37 Canadian features at the festival this year, with another 61 Canadian short films shown. The 335 films mentioned above come from a staggering 3545 submissions.

This year looks like one of the biggest and brightest that the Toronto International Film Festival has ever seen and The Gate will be right there to bring it to you like no one else will.

For more on the festival check out our feature spotlight at tiff.thegate.ca or head over to the official website at www.bell.ca/filmfest/.