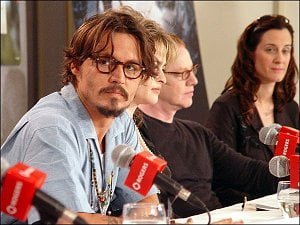 Traditionally, the first weekend of the film festival are the days that are the most top heavy in terms of stars and filmmakers coming into town to make the scene and showcase their films.

This weekend is no different – Johnny Depp, Tim Burton, Orlando Bloom, Kirsten Dunst, Kiera Knightley (If they wanted to shoot some pick-up shots for the Pirates of the Caribbean sequels – almost the entire cast is in Toronto this weekend!).

If you are covering the film festival as a journalist it can get a bit overwhelming especially if you are attending a press conference like the one held to showcase Tim Burton’s Corpse Bride held today at the Sutton Place Hotel — I had mentioned in an earlier entry that I would believe Johnny Depp was coming when I actually saw him here — well, I actually saw him here and his presence here guaranteed that jackal-like horde of photographers climbing all over the furniture to get that sell-able shot.

There will be a lot more on the Burton/Depp press conference elsewhere on The GATE so I won’t go into great detail about here — but as an observation made by someone who has spent a bit of time on and off with Johnny Depp since 1998, I can say that I have never seen him so relaxed at a press event (something he absolutely loathes participating in). I have been with Mr. Depp in formal interview setting, on movie sets, having coffee, and at press conferences (most of it for the book I did on Depp and his films called Depp) I have found that he is an introverted person off-camera (unless you start talking about books, he loves talking about books) but today, with actor Helena Bonham Carter on one flank and Mike Johnson on his other flank (with Tim Burton and Danny Elfman also on the panel) Depp looked calm and relaxed in his usual neo-hobo attire of loose fitting light blue short sleeved shirt over a white t-shirt, jeans, his usual worn boots, and beaded necklaces hanging from his neck and several trinkets and bracelets wrapped around his wrists (several of them hold a very pointed significance for Depp as they were made for him by his daughter Lily-Rose).

He is still sporting the gold teeth that he put back in to reprise his role as Captain Jack Sparrow in the two Pirates of the Caribbean sequels shot back to back. Depp joked with Helena Bonham Carter and was tripped into near hysterical laughter every time his friend Tim Burton cracked a joke. Depp was clearly uncomfortable by some of the questions (especially the one about his participation in the rather eccentric send-off he planned and carried out for his friend, the late Hunter S. Thompson) and clearly bemused and bewildered by others (one woman asked him if his children were afraid of him!) but through it all he remained respectful and jovial.

But there are other things to mention about the festival other than the two day visit by Johnny Depp. I wanted to also mention a hilarious, poignant film by Nordic filmmaker Robert I. Douglas — his film Eleven Men Out is his fourth film and a delightful one at that — it is about a big league professional soccer player who is troubled by the lack of respect he gets from his own family — then he outs himself as being gay to a reporter and becomes the centre of a tabloid controversy that completely flips his life upside down in a sometime funny but sometime sad and tragic way. This is the kind of film I love seeing at the film festival because it is an almost certain fact that this festival is the only place that such a film could be seen.

I would also like to mention the fabulous work done by Toronto filmmaker Clement Virgo on his new film here at the festival called Lie With Me. Much is being made about the sex in Atom Egoyan‘s film Where The Truth Lies, but I found that Clement Virgo’s treatment of sexuality as a tool for gaining power for a young woman to be much more stark and uncompromising and real. This is graphic sex on screen not for the purpose of titillation or to purposefully disturb, Virgo handles this material (take from the novel written by his partner Tamara Faith Berger) with a rawness that actually brings a clarity to the story rather than stopping it dead.

I would also like to mention something that I was given yesterday by publisher McArthur and Company — it is a slim volume called Film Festival Confidential by William Marshall, one of the creators of the Toronto International Film Festival (back when it was called “The Festival of Fesitvals” for some odd reason). The book is his admittedly one-sided look at the roller coaster history of the festival. I started reading it just to get a taste of it and found that I simply could not put it down — I have been covering the film festival for thirteen years now and it was a real joy to read what was going on behind the scenes during all that time.

More to come… until then, check out more coverage @ tiff.thegate.ca.