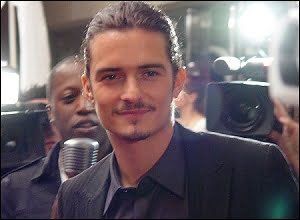 There is something truly fickle about fame and celebrity, especially in this era of wildly out of control celebrity worship. And don’t get me wrong, I am as much a participant in this as anyone (I’ll admit right here and now that I did indeed buy a copy of the new Vogue for Men when it premiered last week). I noticed something interesting over the last few days about a couple of the soaring white hot “it” people of the moment who are both here at the Toronto International Film Festival with films, good films at that. Orlando Bloom, here with the wonderful Cameron Crowe film Elizabethtown, has been stalked and followed and chased like he was some rare and exotic form of jaguar semi-loose on the city.

The press conference for Elizabethtown was packed and he was mobbed at the red carpet walk before the Gala. And this is all very understandable, he is a good looking dude, charming and charismatic as hell, he has several of the highest of the high profiled movies of the last few years under his belt. Then there is the case of Kiera Knightley, the gorgeous young coltish beauty who has also starred in a number of high profiled films – including Pirates of the Caribbean parts one through probably infinity opposite the aforementioned Orlando Bloom, and Miss Knightley is here with her film Pride and Prejudice which, while a bit on the slow and talky side (How could it not be, being based on Jane Austen?), is actually quite solid and entertaining and Kiera Knightley is really good in it. But even though she has also been a magazine cover-girl of late, her press conference was sparsely attended and her red carpet walk-down was described by one local TV person as “a subdued affair”.

What does it all mean — is the temperature of the pop culture fever so up and down that a stars popularity is now measured on a minute by minute basis? Bottom line here is both of these young actors are here proudly displaying movies that they have every right to be proud of. And how about Guy Ritchie, in town with his new film called Revolver, a film that sees him returning to his hipster neo-noir crime thriller roots after his rather dubious, though completely understandable, waltz into romantic comedy with Swept Away. The film is a lot of fun — with some great work done by Ritchie regular Jason Statham and Ray Liotta, but if you look closely this is a film that Ritchie had to get financed in France.

I have met Ritchie to interview him a couple of times over the years – once here in Toronto when no one knew who he was and he had just completed work on a film that was getting a lot of buzz called Lock, Stock and Two Smoking Barrels. He is a, as they say in England, a lads lad. A friendly, talkative guy who loved to talk about the process of making the movie like it was a grand adventure. The next time I sat with Guy Ritchie it was in Beverly Hills a couple of days after he married Madonna — I was told going into his suite by the legion of publicists and other pilot fish that I was under no circumstances to mention Madonna or his marriage while in the room. Okay, I walk into Ritchie’s suite, say hello, shake his hand, the first thing out of his mouth is — “what a weird time, I just married one of the most famous people on earth, flew across the world to be in Beverly Hills to talk about a movie I made a year and half ago…” I had to politely tell him that I wasn’t a llowed to discuss HIS marriage!

Guy Ritchie is back in town with his new film and his wife is with him doing a good and conscientious job of staying as much in the background as Madonna can in this world and allowing Guy Ritchie to have his Toronto International Film Festival moment. Although many reporters did call out questions to her about he recent horseback riding mishap on her birthday that resulted in a number of broken or cracked bones.

This year is certainly proving to be an A-list affair– even more so than in previous years — there seems to be a real harmonic convergence in terms of all these actors and filmmakers (and rock stars) being free to come to Toronto at the same time.

But there is another statistic that the festival should be proud of and should take as a clear indication that the Toronto International Film Festival has now overtaken Cannes as the premiere film festival on earth not on in terms of the films shown but in terms of the business done here. The number of buyers and distributors who are here looking for films, looking for new talents, is up a full 40% over last year meaning that distributors and buyers from all over the world see this as the place to be and know that they need to be here.

So whether your are here to plug your movie and spin that fickle wheel of fate or whether you are here do some business for your company that might make or break you — the important thing is that you are here, at the Toronto International Film Festival.

More to come… until then, check out more of our coverage, photo galleries and upcoming reviews @ tiff.thegate.ca.