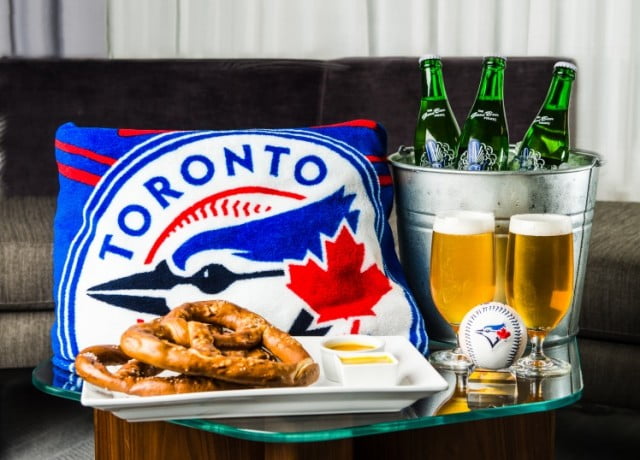 The Toronto Blue Jays will celebrate their 40th season home opener from Friday, April 8 to Sunday April 10, as they take on the Boston Red Sox, and the InterContinental Toronto Centre is inviting fans far and wide to come down and celebrate with them and their 2016 Home Opener Package.

Bringing together comfort, location, and luxury, the InterContinental Toronto Centre’s Home Opener Package offers a great package for fans, whether you’ve got tickets to the game or not. In addition to a Feature Room with a view of the lake, the package also includes a Blue Jays throw blanket, jumbo soft pretzels, a bucket of Steam Whistle beer, buffet breakfast for two at the hotel’s Azure Restaurant, valet parking, plus an official-size Blue Jays souvenir baseball, and late checkout.

The 2016 Home Opener package starts at $399, plus tax, and it’s a great deal for a sports-themed staycation in downtown Toronto. For those who may just want to take in the Blue Jays vibes, Azure Restaurant has a new big-screen projection TV to watch the game while you grab a beer and a bite.

Last week I had the opportunity to stay at the hotel for the first time, and it was a fantastic escape. It was also a chance to see Toronto in a completely different way. Living in the city is one thing, but spending the day downtown makes you see it differently, and gives you a chance to take it easy, whether you want to walk over to Ripleys Aquarium, or if you are headed to the Rogers Centre, which is practically next door.

While I’ve been in the hotel numerous times for conventions, and during the Toronto International Film Festival for interviews, the InterContinental feels much more fun and relaxed when you’re staying there, and the rooms–particularly the Feature Rooms–made me feel like I was on vacation, rather than working, which is not always the case in downtown city hotels.

Everything is also right outside the door of the hotel. The hotel is on Front Street, near Union Station, and there are a number of great restaurants in every direction. Plus, Roy Thomson Hall is up the street, or King Street is a short walk away as well, and that’s on top of the CN Tower to the south, and Rogers Centre. It also didn’t hurt that my room had a great view of the lake, the Rogers Centre, and the CN Tower, which looks larger-than-life when you’re just a few yards away.

The staff at the InterContinental are also wonderful, and my family and I really enjoyed the buffet breakfast at Azure, which has a little of everything, from lox with capers, to french toast, made-to-order omelettes, bacon, and fresh fruit. They also treated my daughter like a queen while she was there (which is something wonderful when you see hotels that don’t even seem to acknowledge little ones).

This looks like it will be a big season for the Blue Jays, so hopefully there will be even more opportunities for the InterContinental to offer special baseball packages, but there are also a number of special packages available to stay at the hotel and enjoy the spa, go shopping, or take in another event at the Rogers Centre.

It’s a thrill being at the heart of the city, so close to everything, and with piles of entertainment in every direction, Blue Jays fans will find there’s nothing more welcoming than staying at the InterContinental Toronto Centre.