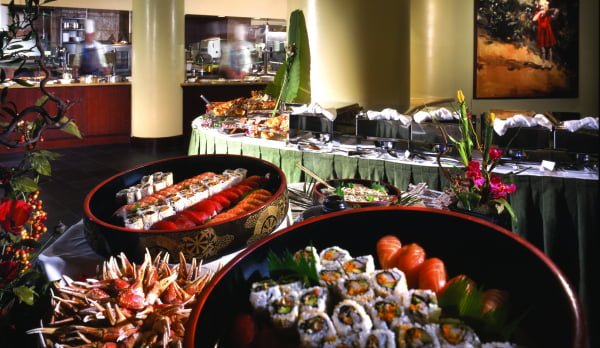 Living in the ever changing, exciting world of the Fairmont Royal York Hotel reminded me that, as familiar with a place you think you may be, it can and does show you constantly that there is more to the place than meets the eye.

Such was confirmed for me recently on a wonderful evening that begin on the roof of the hotel and ended with a splendid dinner with the hours in between being filled with great company, great food, and lots of hotel talk.

I had been graciously invited to spend the evening and have dinner with eight visiting writers from Europe (including Spain, Belgium, and Sweden) that were here to experience the Royal York and report on the impressive dedication to green living that the hotel has committed to. The evening began on the roof of the hotel where we were greeted by Epic restaurant (the main restaurant in the Royal York) chef, Regina born Ryan Gustafson… in his herb garden.

Chef Gustafson explained to me, between sips of his fantastic white pear Bellinis, that he uses the herbs grown on the roof in his dishes (the European writers were earlier taken to the St. Lawrence Market to meet some of the local produce suppliers that The Royal York and Chef Gustafson use). From the herb garden we moved to another part of the roof where the thriving bee hives were located.

The hives were, for lack of a better word, buzzing with bee activity. These Royal York bees produce for Chef Gustafson’s dishes – to the tune of 350 pounds of honey from 2008 through now, and with the addition of three new hives that amount is likely to double through the harvest of 2009. And what wonderful honey it is – we all sampled it later at dinner – I had it straight and I had it in the wonderful home made honey ice cream. It is divine, sweet but not too sweet, and with that lovely hint of clover/lavender in the taste.

Standing at the edge of the roof with two of the writers, one from Belgium and one from Sweden, I was pointing out Toronto Island and Harbourfront from the wonderful perch we found ourselves viewing them from. Then we were distracted by the sight and sounds of two fighter jets screaming overhead (nothing serious – just a practice fly by for the opening ceremonies of the Honda Toronto Indy to be held a couple days later). The Belgian fellow never batted an eye at the jets – you see, he works just meters from NATO headquarters in Brussels so military vehicles are a common experience for him. 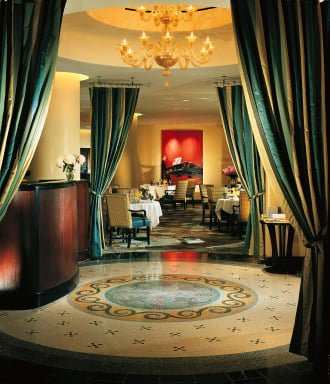 It was then time to head down to Epic for dinner – and I must say that the name of this restaurant is entirely appropriate. Everything about the place is… Epic. The feel of the space, and the wonderful and diverse menu served up by the aforementioned Chef Gustafson.

One of the interesting things about his menu is that everything from the appetizers to the main courses to the desserts focus on local cuisine and are in keeping with the committment to environmental awareness.

As we went into the private dining room that looks out on the lobby (we needed to be away from the other diners as writers tend to get rather loud and boisterous when collected together in numbers of three or more) I made sure to position myself at the table very carefully – sitting across from a writer from Madrid, Spain, a beautiful woman with the dark, dusky features of a flemenco dancer – but that was not specifically why I positioned myself thus – it was, of course so I could speak to her most enthusiatically about our shared passion… Real Madrid. And what a conversation it was! I was a fan, a supporter, but sitting across from me was the real thing – a Madrista!

As we ordered our dinners based on Chef Gustafson’s suggestions I made sure to tell the European gathering that while I have been in every hotel in town for the reason of writing or talking about them – they were all lucky enough to be in the best, the grandest hotel in the entire city – by far. Then we dug in. Personally, I had the prawns and asparagus for an appetizer then had the most delicous ribs and mashed potatoes as a main course – the meat was so well prepared that it literally just fell away from the bones upon the gentlest of urging from the fork.

The hours flew by as we enjoyed the food and the wine and the conversation – Melanie Coates, our host, was providing a running litany of facts and stories about the hotel and its rich and vivid (and still constantly unfolding) history. Including the fact that there was another Canadian writer that lived in the Royal York as a writer-in-Residence – the renowned novelist Arthur Hailey who used The Royal York as the physical reference for his hotel setting in his novel Hotel.

I chipped in with my personal stories of the people and times I have met and interviewed and experienced in this place and once again the magical quality of this hotel dawned on me – that here we were, a collection of diverse people from Canada and Europe and Scandanavia all in the Royal York – all sharing the splendor, all enjoying the comfort it provides as a common denominator. Even though dining pretty much ends at 10:00 PM at Epic – we were still sitting there enjoying the evening at 11:30. Then we parted company and headed to our respective suites.

Early the next morning as I stepped out for a coffee I ran into one of the European writers on the sidewalk outside the hotel. He asked me for some intructions on which subway line to take to the Royal Ontario Museum – then I motioned for him to look at the Royal York Hotel from our position across the street, in front of Union Station. I told the writer to look at the grandeur of the old structure as it is framed by the modern glass bank towers all around it – yes, the glass towers now dwarf the Royal York, but they in no way diminish it.

For more information on Epic, go to www.epicrestaurant.ca.