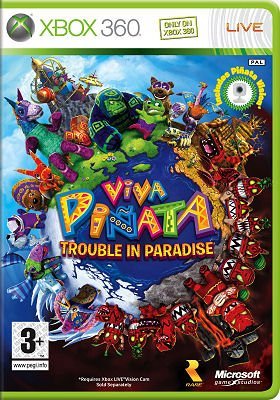 Professor Pester and his gang of nincompoops are messing things up at Piñata Central, and only you can help the piñatas reach their party destinations.

In the sequel to the hit Xbox 360 title, Viva Piñata, you and your little ones are invited to tend your piñata garden, make new friends, and visit new places.

Much like the first game, the concept remains the same. Your goal is to grow plants that the piñatas like, build them homes, and expand your terrain. As you make the piñatas happy, you earn new levels and extra money by winning challenges, helping the piñatas romance, shipping them off to parties, or selling things from your garden. At the same time, Professor Pester and his cohorts will try to destroy your garden.

While the core elements of Trouble in Paradise remain the same, the game does branch off in a number of ways.

For one thing, the Dessert Desert and icy Piñarctic locations offer new species of critters that you can bring back to your garden. Just drop in some sand or snow and you’ll be able to grow new plants to keep the piñatas from wandering away.

But the coolest add-on for Trouble in Paradise is the “Piñata Vision” feature which, using the Viva Piñata website and the Xbox Live Vision camera, lets you share piñatas with your friends or bring new piñatas and items into your garden. By taking pictures of your piñatas in the game, you can upload them to the website, where other users can print them off. Showing the picture to the Vision camera then brings the piñata, or items, into their garden.

When you think about how easy it would be to just allow users to send piñatas through the gaming system, the concept of “scanning” pictures is kind of strange. Truthfully though, the collectible concept is actually pretty brilliant, and makes it a bit of added fun to find fun add-ons (apparently the developers of the game were going to hide special cards all over the place). There is also something satisfying when you see a critter appear on the screen just because it was scanned.

Last of all, the other big add-on is the ability for friends, or parents, to work on the same garden together through Xbox Live. That means that one person can focus on building things while someone else adds plants.

Trouble in Paradise caught me right away, and had me hooked for a while. Despite the slow opening, which is aimed at teaching kids how to play, there is instantly a lot to do that is really engrossing. The piñatas are also pretty darn cute, and there are endless challenges to keeping your petting zoo or critters happy.

At the same time, I found this new game slightly less appealing than the original, if only because it is only slightly updated. The Piñata Vision feature is really great, and so is co-op play, and the addition of new locations, but it felt like I was otherwise replaying the same game again. I also didn’t have a Vision camera, so I only really saw that feature in action at a demonstration.

For the little ones, and the truly intense Viva Piñata fans, the game definitely offers loads to keep you amused. It’s a big game made even larger by the opportunity to grow and build at your own pace, and it makes fantastic use of the otherwise underused Vision camera.