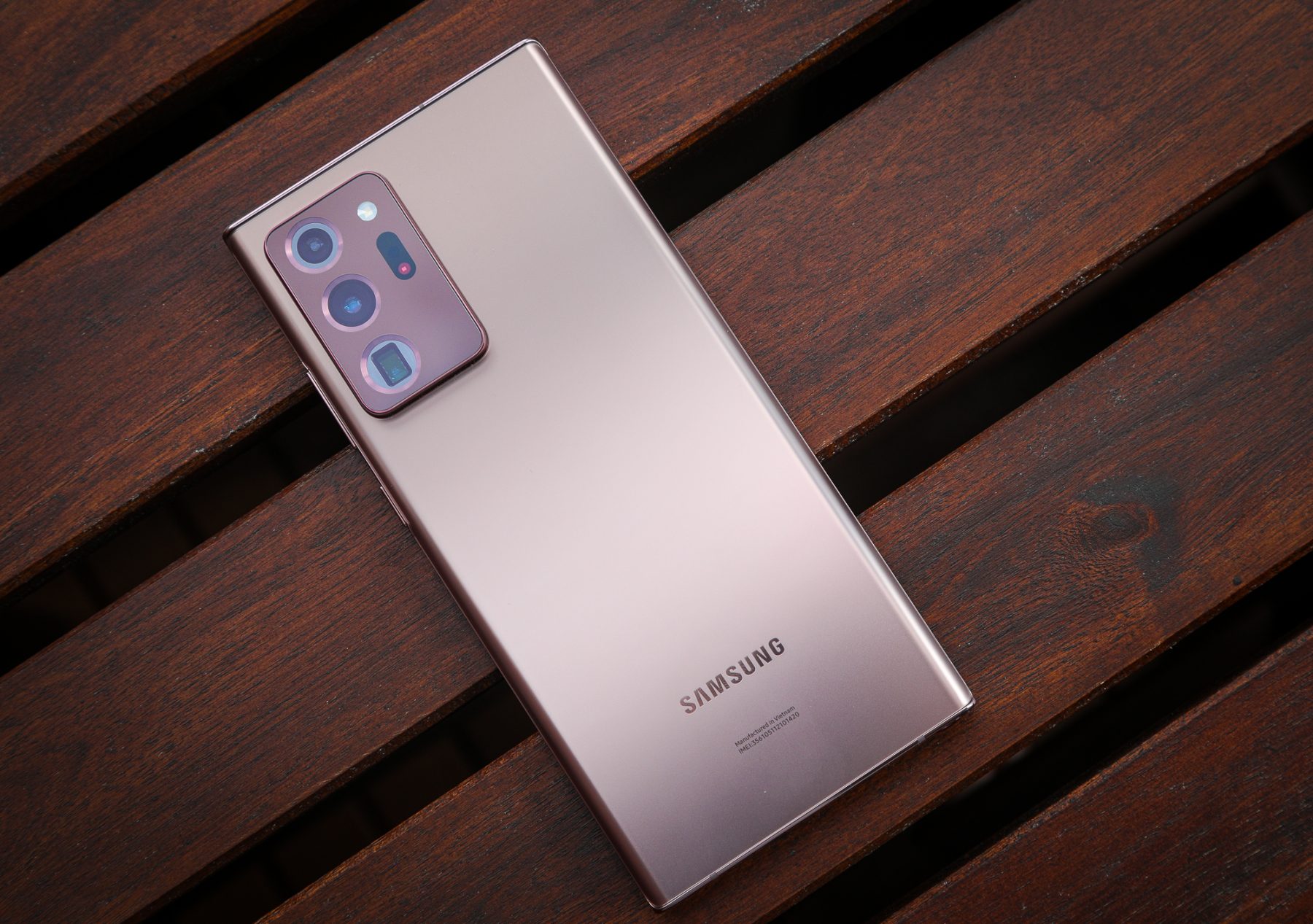 There’s a lot to love about the Samsung Galaxy Note 20 Ultra. The phone is powerful, versatile, fast, striking, and unique, and from the screen size to the 8k video, it’s a creator’s dream device.

For the last few days, I’ve been using the 5G phone, shooting video, and capturing photos, and while I have a few small gripes, I’m mostly blown away. The screen is gorgeous, the design is bold and elegant, and Samsung improved a number of features over both the Galaxy S20 and Note 10+.

Arriving in Mystic Bronze and Mystic Black, I have to admit I was dubious about the Bronze colour when I first saw a photo of it. In person though, it’s stunning. Samsung has created a unique colour that almost looks like rose gold, and resists fingerprints with a matte finish that really stands out. I absolutely love the way the back shimmers and changes tone in the light.

The camera array on the back of the phone is also very bold, and while I wish it didn’t stick out quite so far, it looks great and works very well. The right case will also make sure you won’t have to worry about damaging the cameras.

Holding the phone is also very comfortable with the Note 20 Ultra’s beautifully curved sides that perfectly meet the edge of the display.

And then there’s the screen. The 6.9″ dynamic AMOLED display is really beautiful, especially for video, photos, and gaming. Plus, the 120 Hz refresh rate makes everything look crisp, and dynamic.

Hidden away at the top of the screen is the selfie camera, which is normally fairly hard to spot a lot of the time, since it’s so small. Otherwise, there’s only a very slim black border around the display,

Overall, the whole design and display makes the Note 20 Ultra feel like a robust ultra-premium device.

For me, the standout feature of the Galaxy Note 20 Ultra is the exceptional 8K video quality, and the new Pro Video mode.

First off though, on the front of the phone, the Note 20 Ultra has a solid 10 MP selfie camera, while the rear has three cameras–12 MP ultra wide, 108 MP wide-angle, 12 MP telephoto–and a laser AF sensor.

The selfie camera is good, by the way, especially with Life Focus mode to make it look like a proper portrait, but it’s definitely the rear cameras that are going to wow you.

For one thing, the Note 20 Ultra cameras support 5x optical zoom, and up to 50x super resolution zoom in standard photo mode. Like most phones though, I’d say that generally you’ll get the best results at 10x to 20x zoom at the most. After that, the images can be very pixelated, but that’s to be expected for any digital zoom I’ve tested.

Switch over to Pro Video mode though, and you have a lot more options for capturing cinematic quality footage. In addition to 16:9 ratio, you can also shoot in 21:9, at 24 fps, or in a number of other sizes, including FHD, 1:1, or in other speeds, including FHD 120 fps, or UHD 60 fps.

Pro Video mode also gives you control to adjust white balance, focus, shutter speed, ISO, and you can choose how to capture sound. That sound control is also really interesting considering you can connect USB or Bluetooth microphones for pro results. I haven’t tested the results, but I’m really curious to see what the results sound like.

For photos, I had great results from the cameras. The colours and contrast are incredibly true-to-life, with rich details, and exceptional texture. Thanks in part to the new laser AF sensor, the focusing is also very quick, and very accurate.

For ultra-wide photos, I’m also incredibly impressed by the clear, undistorted images. A lot of phones have ultra-wide cameras now, but few get it right. The Note 20 Ultra though has an amazing ulra-wide lens, with great distortion correction for an image that looks like it came out of a DSLR.

If you’re curious about my 8k video, you can watch a short sample shot with the Note 20 Ultra on YouTube and at the bottom of the review.

Thanks to the Qualcomm Snapdragon 865+ processor, and the 12 GB RAM, the Note 20 Ultra is a gaming monster, and everything looks fantastic on it. I’m very excited to try out Xbox Game Pass on the phone, but for now, the existing Andriod gaming library looks great.

Watching 8k video on the phone, the results are beautiful, rich, and detailed, and streaming HDR content to the phone also looks fantastic.

Most of all, having all of that RAM under the hood, as it were, really makes everything quicker and easier. From editing video with Adobe Premiere Rush, and editing photos, to gaming and work, 12 GB of RAM makes a big difference compared to the usual 4 GB or 6 GB most phones have.

The 4500 mAh battery is also good, it charges up incredibly quickly, and doesn’t drain too fast, but I do wish the phone had a slightly bigger battery somehow since gaming will eat it up much more quickly.

Otherwise, the S Pen has been moved to the left side of the device, which doesn’t make a lot of difference, but there are a lot of improvements.

I like the new user interface when you pull out the S Pen, which is now just a simple, vertical list with icons, rather than a circular carousel. Many of the new features Samsung has included, like less latency, better battery life, and tools like being able to straighten hand writing, all make a big difference. There’s also a lot to be said about air gestures with the S Pen, but I’ll sum it up by saying they’re excellent, especially for taking pictures.