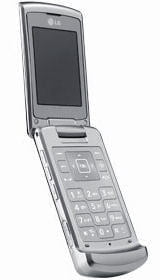 Whether you call it imitation or just following a smart trend, I have to admit that on first glance I dismissed the LG Shine as a knock off of another very popular phone that features brushed metal and an ultra-thin design. After playing with the phone for a week, listening to music, taking pictures, and checking out the features, the LG Shine more than managed to prove itself however.

Packaged with all the standard bells and whistles, the LG Shine 8700 comes complete with a 2 megapixel camera, radio and MP3 player, speakerphone, Bluetooth, and access to video. In addition, the flip phone features a display on the outside to show the time, track information, or caller ID on incoming calls.

In terms of the phone itself, the LG has crisp, clear audio whether you use the earpiece or the speakerphone. The phone also features an easy to use address book for storing numbers, and I was fairly impressed with audio quality over an attached Bluetooth headset (the provided one from NXZen had a decent connection, but the buttons and controls were awful, and it was fairly difficult to keep it in my ear).

For anyone wondering about the battery life – you can’t charge the phone via USB, but the battery has a respectable life as long as you don’t use the speakerphone or video too much.

Speaking of video, I checked out a lot of Bell’s channels on the LG Shine and there’s a bit of interesting content on the phone, mainly from content providers like MTV. I would like to see a lot more options on the channels, but there is enough to keep you amused on the ride home from work.

The radio and MP3 player were probably my favorite features on the phone, with the speaker providing pretty decent audio as well if you don’t plug in the headphones. The player doesn’t offer an equalizer, but the audio is still above average, it would just have been nice to be able to adjust the bass. Also, the phone is a good audio player, but it’s no replacement for an MP3 player since you have no control over music once it’s playing and you close the phone. Only external control is over volume.

With games, the phone responds very well, although my one complaint is with the control pad. The layout is a little tight and I often found myself hitting the clear key, which acts as a back button. That issue didn’t seem to come up as much in other phone functions, like using the web browser, but I still would have liked a better defined control pad.

Looking at the camera, I was impressed with the phone’s ability to capture darker rooms. Actual picture and video quality, including video playback, was average – nothing special, although the bright screen does enhance the display a bit.

Overall, the phone’s design will probably be the LG Shine’s best selling feature. The brushed metal looks very sharp, doesn’t get smudged with finger prints, and the outside display makes the phone look very slick. It’s also the perfect size to slide in a pocket, or speak into when it’s opened – the key being for me that it’s not too small. It may not be the new “It” phone, but it’s one of Bell’s more interesting models out now.