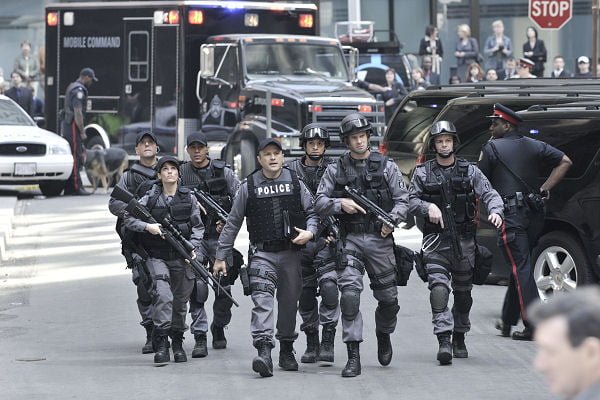 A sniper leans over a rooftop, peering through his scope at a man standing in a courtyard below. On the street, the gunman is screaming in a foreign language as he holds a woman captive, waiving his gun first at the woman, and then at the nearby police. From the sniper’s perspective there is one slim angle on his target, and it’s a perfect headshot.

Meanwhile, Sgt. Gregory Parker negotiates with the armed man to little success. As the gunman becomes ever more enraged, Parker gives the order to take out the target just as a young man rushes into frame. The sharpshooter stars to pull the trigger, we see the young man in the cop’s scope, and then there’s a bang.

This is the setup for CTV’s Flashpoint, a new series that is essentially Canada’s first entry in the very cluttered world of cop dramas, which also debuts on CBS tonight.

Hugh Dillon stars as sniper Ed Lane, one man in Toronto’s Strategic Response Unit, an elite group of special officers who are called to deal with issues the regular cops can’t handle. Enrico Colantoni is negotiator and team leader Sgt. Parker, the guy who makes the tough decisions, and guides his team of men and women to come out hopefully unscathed at the end of the day.

What I love about Colantoni’s character though is that he also seems to symbolize Flashpoint‘s best trait, which is the show’s attempt to show what happens when there’s trouble. In that way, Flashpoint wears its Canadian attitude right on its sleeve, while also paying some homage to the cop dramas of yesteryear.

Most current American crime shows seem to revel in frequently violent episodes where the cops have to shoot offenders and special effects fill out the time with pointless examinations of flying bullets or rotting flesh. Flashpoint on the other hand, is still too new to entirely judge, but the first episode lives mostly within the realm of the human story.

In the series premier titled “Scorpio,” Hugh Dillon takes up the majority of the show’s emotional energy with his performance of a cop dealing with a particularly hard day on the job. As an entry point for this potential series, which kicks of with 13 episodes, it leaves me with the rare glimmer of hope that I might want to follow a cop drama.

Even if it isn’t exactly named as the location, Toronto also pops in this production, with some of the most compelling cinematography I have seen on TV in months. The production values are likewise top-notch, better than almost any series previously produced, aside from maybe the Stargate: SG-1 or Atlantis shows.

And while I do think Flashpoint‘s debut was a soft effort, with a minimal amount of story to tell, the series is a breath of fresh air. It is very much a show about a team, rather than the incident, and I’m seriously looking forward to seeing what stories come to life next.

With the show debuting at such a lousy time on the schedule, late-night on a Friday, the series will need all the support it can get.