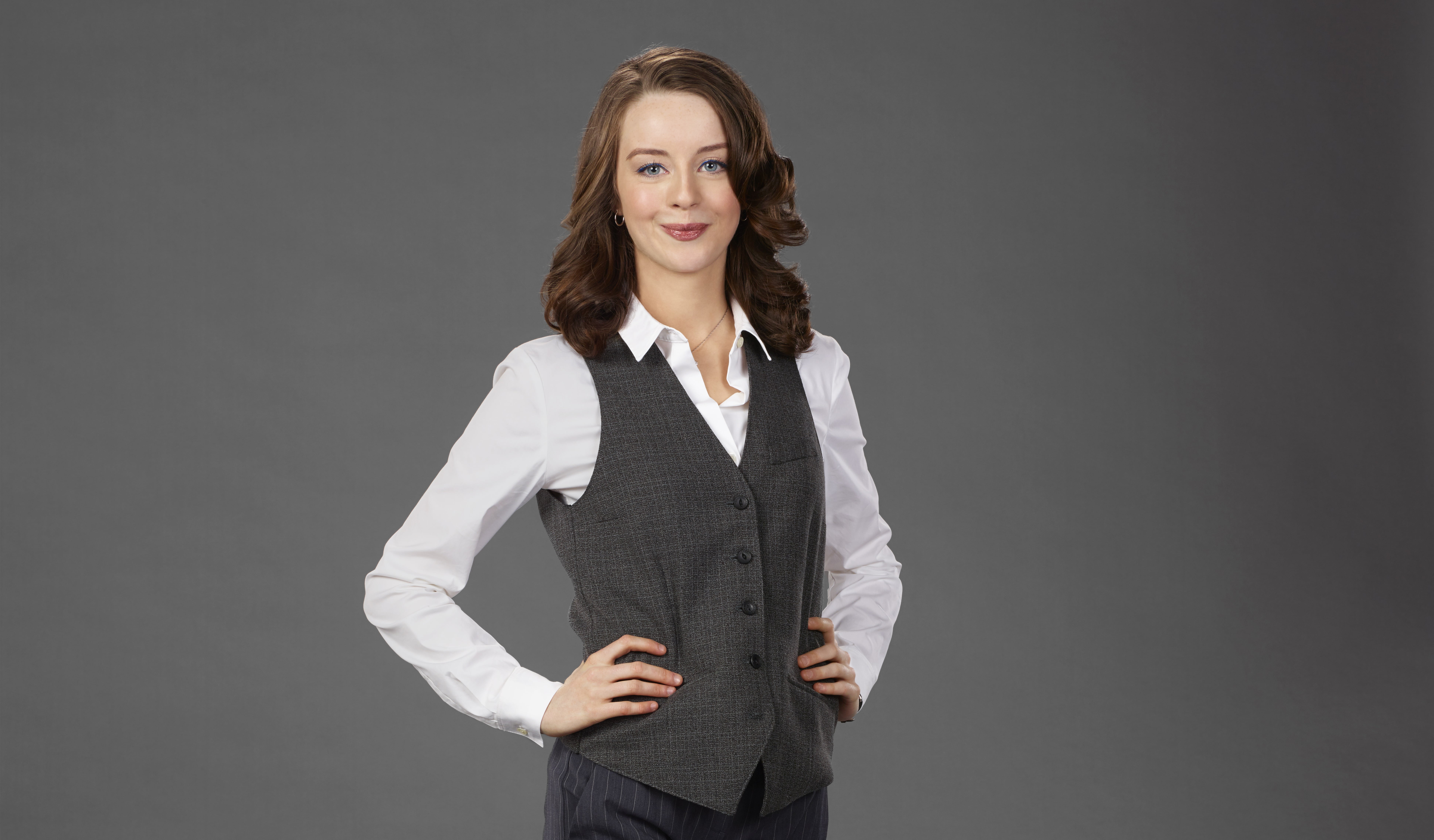 Global’s Working The Engels stars Kacey Rohl as Jenna Engel, a woman who is drawn back into her father’s law firm to help keep her family together and happy. The show also stars Andrea Martin, as Jenna’s mother, Azura Skye and Benjamin Arthur, not to mentioned guest appearances by Eugene Levy and Scott Thompson.

On the show’s upcoming episode, “Meet Irene Horowitz”, which will air on Global this Wednesday, April 9 at 9:00 PM (ET/PT), Jason Priestley directs.

This week I had a chance to interview Rohl about the show, and to chat about working with Canadian comedy greats like Martin, Levy, and Thompson.

Question: What was it like working with these great Canadian superstars of comedy?

Kacey Rohl: “They’ve been together and they’ve known each other over the years, but to see them work together was so sweet and so inspiring. There’s just so much love there, which you can really see in terms of Andrea [Martin] interacting with all of them. It’s just a lot of history and a lot of love, and a lot of zaniness.”

Q: Being on set with them, did they go off on their own, since this was kind of like a reunion, or were they just hanging out on set with everyone?

Q: Well, and Scott Thompson too. For me it was kind of like watching the greats of Canada’s comedy world all together.

K.R.:“Yeah, I know. I was so stoked that we got to have SCTV [stars] and a ‘Kid In The Hall’. Everybody. And I know Scott from Hannibal, so to work with him in a comedic environment–I was like, ‘Oh, Yes!'”

“And Eugene [Levy] is, I mean–I have no words. He’s just so funny. I mean, I grew up watching him in all the Christopher Guest movies, and I just die–I die.”

Q: Did you feel like you learned anything from working with them? Did you glean any knowledge from the experience?

K.R.: “Oh, heavens, I’m sure I did. Any time that I’m on set or with somebody that I admire–even somebody that I don’t admire–I just try to get into full sponge mode and just absorb everything that I possibly can, and sort of sort through it later in terms of what I like and didn’t like. I don’t know if I can put a name on everything that I’ve learned, but certainly there’s an excellence there. There’s a commitment to the craft of comedy that I really admire and a work ethic.”

“All of them came in with tons of ideas, knowing their stuff, ready to go, open to play and I think that’s just a really smart thing to bring to the table in comedy, but also in drama.”

Q: That brings me to my next question. What’s it like going from–you’ve done Hannibal and you’ve done a number of serious roles–and going to Working The Engels. Is comedy where your heart is, or is it all just fun to jump into these roles, no matter what genre is involved?

K.R.: “Yeah. I mean, comedy for my soul–and my head–is so fantastic. I don’t get a lot of opportunity to do it, just because Vancouver doesn’t have a huge comedic thing going on, so I ended up building most of the career that I have now in more dramatic roles–which great–but I will say, as much as I love them, I do feel them, and I carry them a little more, in terms of their heaviness.”

“So, to be able to go and giggle really for four months was such a treat, but I don’t know, I can’t say that I love one over the other. I really, really enjoy doing both and it’s such a privilege to be able to do both.”

Q: When you started filming Working The Engels, what was the first thing that you thought about playing Jenna?

K.R.: “Well, when I read the script I immediately thought of my family. [Laugh] They’re going to kill me. They’re not nearly as zany as these guys, but I saw colours and flavours of them, and Jenna really reminded me of two particular people–they know who they are–and, yeah, I don’t know. I just thought–I understand this dysfunction–if it even is dysfunction. I think every family is dysfunctional, you know. Anyone who says they’re functioning is lying. [Laugh]”

“I don’t know. I found a way in really easily because I just identified with the weirdness of it.”

Q: And, really, if there’s no weirdness, is it really a comedy?

Q: As you’ve played Jenna, how do you think she has developed throughout the season?

K.R.: “I think that when we first meet her, she’s working at the big corporate law firm. She’s the one in the family who has every single possible duck in a row–if she does or if she doesn’t, we don’t really know, but she certainly wants it to be that way and ‘gosh, darn it, it’s going to be that way.’ So, she’s pretty high strung, and she’s pretty anal, and I think Jenna’s blessing in disguise is her mother accidentally falling off the roof. It’s a crazy thing to do, but it puts her back in contact with these characters who she grew up with, and remind her that–even if you think that you have everything together, you still come from the people you come from, and you carry your stories and they’re all in you.”

“So, I think they help her–over the course of the season–calm down a little and slowly introduce new things into her life, and friends, and you know, other relationships, and just kind of loosen up a little bit. She usually saves the dancing for the private of her home and then la-di-da she’s on a stripper pole. [Laugh] Over the course she loosens up a bit, or at least, I hope that’s what she does, if I did my job right.”

Q: Is there much of you in her, or is she wholly unique from you?

K.R.: “I don’t think–I hope. Oh, gosh. Correct me if I’m wrong, but I don’t think I’m as uptight as her. I can certainly get into moods where I’m really quite particular, but I’d say I identify far more with her quirky side–with her weird and wacky.”

“I certainly dance and sing in my apartment alone–very loudly and flamboyantly, on the regular, so that’s certainly where I come out in her.”

K.R.: “Ah, well–yeah. I do. You were saying that I play a lot of dramatic roles. I think a lot of the young women that I’ve had the opportunity to play are very troubled and broken and in a place of a lot of hurt and a lot of confusion and I am so fortunate that I lead a very happy life. So I definitely identify more with Jenna than I have with other characters I’ve played. I mean, everyone’s got that darkness in them, but I can’t shine a light on it too often. Otherwise I’ll just live there and I don’t want to do that. [Laugh]”

Q: If you had a dream for where Jenna is headed down the road, what would you like to see?

K.R.: “Gosh. I think just a little more self discovery. I mean, that’s every character’s thing–what a bland answer. [Laugh]”

Q: Lastly, if you could have any Canadian celebrity on the show, who would it be?

Q: I really loved that Jason Priestley directed this new episode with Eugene Levy and Scott Thompson, but second season maybe, who would you want on the show?

K.R.: “Well, he could come and play a part. That would be really sweet. I mean, he’s a lovely director, but I’d love to act with him. But, you know, honestly, I’d take a Jim Carrey. That would be pretty sweet. Oh, I know Dustin Milligan from out here–he’d be fun to have out. Any of the other Kids In The Hall, even though he’s got his own show now. Oh, gosh, there are so many. I want everybody. I’m trying to think. So many of the people that I’ve worked with are crazy dramatic actors.”