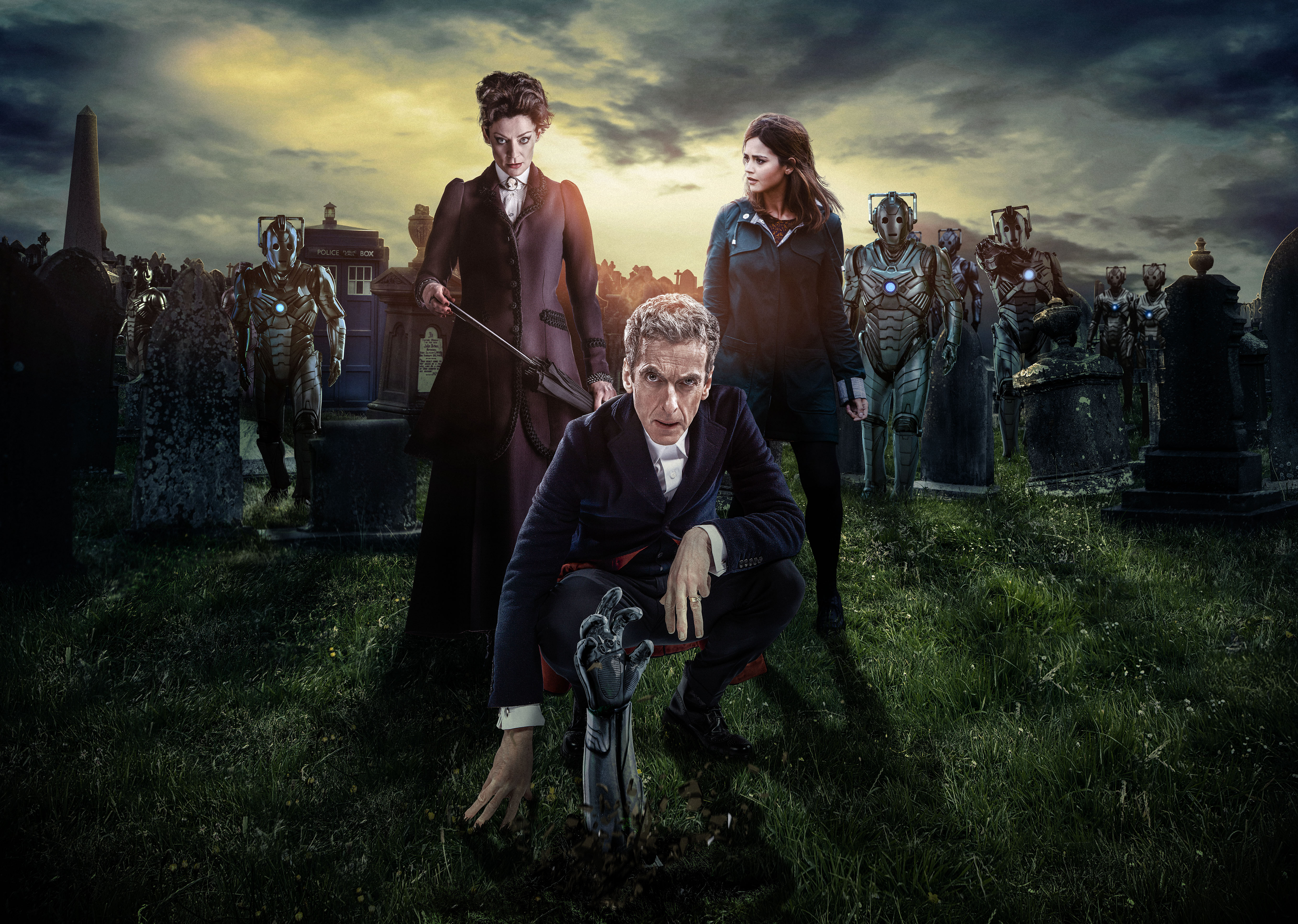 Fans might think it wrong of me to say so, but my favorite moment in the whole Doctor Who season 8 finale happened to be when, spoiler alert, Nick Frost stepped onto the TARDIS as Santa Claus.

Before we get to this recap, it’s safe to say that season 8 of Doctor Who is not the franchise’s best work. Peter Capaldi as the twelfth Doctor is unique and fresh, but he’s following in the footsteps of what I can only call the show’s biggest seasons on an international scale, and that’s because the Doctors before him have been fantastic, and they were cast with fantastic co-stars as well, who shared special chemistry. The actors playing the Doctor before him have been nothing short of brilliant, and Capaldi’s storylines have been strong, and fresh as well as they wander away from the well-worn paths we’ve seen for the past seven seasons, but his pairing with Jenna Coleman as Clara Oswald is good at best.

The chemistry between Matt Smith and Coleman was powerful, and offered opportunities with the plots that I really enjoyed, whereas Capaldi seems like a school principal next to Coleman’s schoolmarm, and that concept just has not played out strongly. The two seem close, and familiar, but hardly as close as previous Doctors and their companions.

But “Death in Heaven” has led us to the obvious payoff for a season of build-up where the afterlife has been waiting for some kind of showdown, and the payoff is almost immediate following the death of Clara’s boyfriend, Danny Pink (Samuel Anderson). It also made for one of the stronger episode arcs this season.

It turns out that Danny has been uploaded to the “cloud”–the Nethersphere (a word that reminds me of Lexx, more than anything else)–after he died where his consciousness has been stored along with the rest of humanity–every single person who has ever died on Earth–all thanks to Missy (Michelle Gomez), who we discover is actually the The Master, another Time Lord, regenerated this time as a woman.

(Sure, The Master can regenerate as a woman, but so far not The Doctor? Just saying.)

Outside St. Paul’s Cathedral, where Missy’s 3W company has set up shop to capture the dead, the Cybermen she raised are waiting for orders as people on the street start taking selfies with them. That’s when UNIT shows up, led by Kate Lethbridge-Stewart, just in time for Missy to send her precisely 91 Cybermen into the air to take over cities across the United Kingdom. Other Cybermen are doing the same thing around the world, exploding in the air over each city to release a rain that somehow brings the dead back to life as a new army of Cybermen.

This is where the plot gets a little hard to believe, even by Doctor Who standards, and we simply must trust that somehow this rain can bring long-dead bodies back to life, clad in iron suits and everything.

UNIT jumps into action after the Cybermen explode, taking Missy and the Doctor captive, and heading back to their command centre. 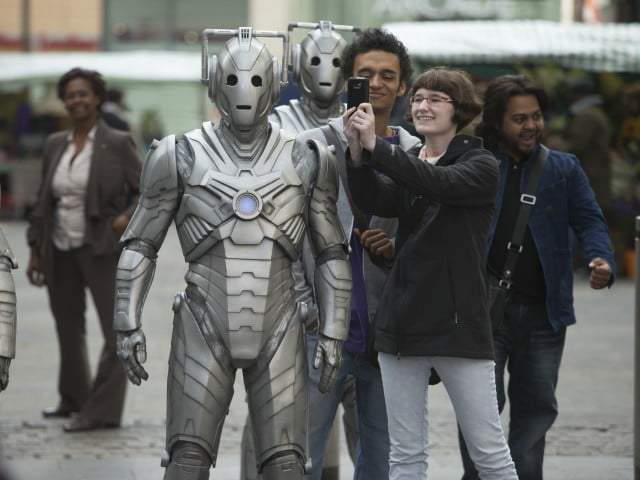 Doctor Who – The Cybermen

Back inside St. Paul’s Cathedral, Clara is having a face-off with Cybermen who want to kill her, but she is trying to convince them that she’s actually the Doctor, and that this Clara person never existed–she’s just a made-up cover for the Doctor.

The Cybermen don’t believe Clara, of course, because they know exactly who she is, and when one steps forward and stuns her, we discover it’s none other than Danny Pink, downloaded to his old (dead) body, which now is a Cyberman too. Danny never deleted his emotions like they wanted him to in the Nethersphere, so he’s his own (dead) man still, and he quickly destroys all of the Cybermen threatening Clara.

On-board UNIT’s fancy plane, which is their mobile base, Kate tells the Doctor that the Earth has named him President of Earth–or the “the Chief Executive Officer of the human race”–for as long as he is in the plane. In back of the plane, Missy is being held captive until she pulls some clever tricks, kills a UNIT scientist, and brings the Cybermen to her rescue to take over the plane. When the Doctor discovers Missy is loose, he runs to confront her, but Missy teleports away, and the Doctor is left free-falling to his possible demise. Kate also falls out of the plane and is presumed squashed somewhere down below.

Of course, this is the Doctor, who goes all James Bond, as any brace Scotsman would, and falls his way into the TARDIS, which was on-board the plane. Joining Clara in a graveyard, where she comes to and discovers Danny, there is a confrontation finally between Clara and not-so-dead Danny. Clara essentially tells the Cyberman, who she does not realize is Danny, that the Doctor means the world to her. When she realizes she’s speaking to a re-animated Danny, he tells her he can’t go on feeling this pain that she’s inflicting him with and needs her to turn off his emotions, which would turn him into a full-blown Cyberman.

Clara, effectively choosing to commit suicide to help Danny, is considering it until the Doctor confronts Danny, but Danny throws it in his face and says that he knows one way that the Doctor will forget his wishes and throw Danny to his end: if Danny can connect to the Cybermen hive-mind he can tell them what the next stage of the plan is, and to do that, they need to turn off Danny’s emotions.

The Doctor clearly can’t process this idea and walks away, unable to do what is needed of him, so Clara takes the Doctor’s sonic screwdriver, which has not seen a lot of action this episode, and points it at Danny, pressing the button and willing the switch that will turn on the emotion blocker. As Danny loses his emotions, he discovers the truth of the dark clouds that are still hovering over the Earth: once the clouds let loose again they will kill every living person, effectively transforming the rest of the Earth into a gigantic Cyberman army and ending the human race.

That’s when Missy teleports in to tell the Doctor that she created the Cyberman army to give them to him as a birthday gift, and doesn’t he remember that it’s his birthday? All he needs is her bracelet which will give him complete control over an army that can allow the Doctor to destroy his enemies and right any wrong he finds. The question is, is the Doctor a good man? Can he choose correctly in every decision, or will this army turn him into a monster?

Remembering all the times that his morality has been questioned, the Doctor seems unsure what to do, but Missy says that if he doesn’t take control of the army the rain will fall and humanity will be destroyed.

That’s when the Doctor finds his answer. “You know what I am? I am an idiot with a box and a screwdriver. Passing through, helping out, learning.”

As Danny the Cyberman stands in front of Clara, he puts his hand on her back, and the Doctor tosses him the Cyberman control bracelet. Danny immediately seems to know what to do, leading the army of Cybermen into the sky to save the living by blowing themselves up, where they will destroy the deadly cloud over the Earth. He has a sweet moment with Clara before he flies off, and that seems to be the end of Danny and Missy’s Cyberman army.

Missy just wants her old friend back, as she used to be the Doctor’s best friend once upon a time, so she gives the Doctor something he has wanted for a long time: the coordinates to their home planet of Gallifrey, which the Doctor thought was lost. It has returned to their dimension, Missy says, and they can return together and find a life there.

But, should Missy be allowed to live, and is she telling the truth? Clara thinks not, and she is about to off the woman when the Doctor steps in and says that he will do it. Something he almost seems incapable of doing. He is about to kill her when there is a flash and she’s gone. Clara and the Doctor turn to find one last Cyberman standing there, and it appears that he shot Missy (although to me, it almost looked like Missy was teleported away…), disintegrating her.

The Doctor and Missy

Pointing across the cemetery, the Cyberman helps Clara and the Doctor find Kate, who survived the fall from the plane only because he father, Brigadier Lethbridge-Stewart (the Cyberman who shot Missy), died not long ago and must have became a Cyberman, and he also obviously caught Kate as she fell and put her down safely, they say.

We jump forward to Clara at home some time afterwards. She hears a voice, and it’s Danny speaking to her from beyond the grave, thanks to Missy’s bracelet. Danny can resurrect himself if he chooses, but it’s a one-trick bracelet and Danny instead decides to save the young boy he once killed when he was a soldier. As the young boy materializes, Clara seems to break once again as she loses Danny for the third and most-likely final time.

Two weeks later Clara meets the Doctor at a Cafe where she means to tell him what happened, but he just assumes that Danny saved himself and has come back so they can be happy again. He says that he understands that she obviously doesn’t want to go joyriding any more, and that’s okay by him because he says that he has found Gallifrey. Missy, he says, wasn’t lying about their planet, and the Doctor intends to go back and find some kind of life there.

Clara realizes that maybe the Doctor can finally have his own life, so she lies to him to cover up the truth. But, both of them are lying and the Doctor has nowhere to go back to, and Clara is alone. Is this the end of their travels?

The credits roll, and part-way through we get a scene of the Doctor looking forlorn on the TARDIS as there is a knock at the door. A voice booms in: “Hello? Doctor. You know it can’t end like that. Hmm? We need to get this sorted. Quickly.”

“She’s not alright, you know, and neither are you. I’m coming in,” the voice says. The Doctor stares around confused as he walks to the door.

“There you are. I knew I’d get around to you eventually. Now, stop gawping and tell me,” says Santa Claus, played by Nick Frost, “what do you want for Chrismtas?”

Next stop, Doctor Who‘s 2014 Christmas special, it seems, complete with what I can only call, with such brief glimpses, Alien-like, well, aliens. Here’s the trailer below.
Otherwise, what did you think of the episode, the season, and what will the Christmas episode possibly bring next?