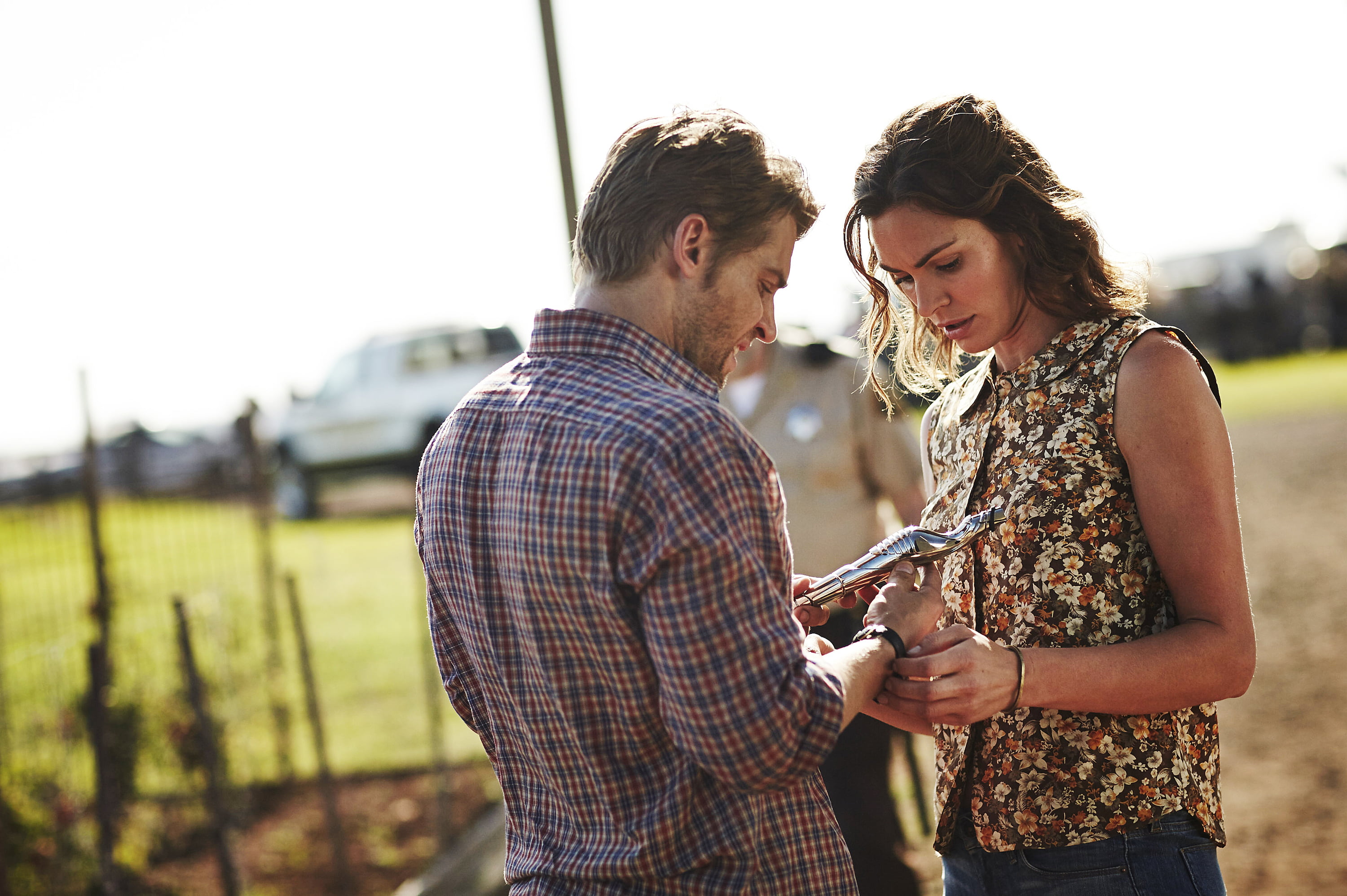 What is utopia worth if it would cost humanity part of its soul? Would an end to war and sickness be worth what could be a terrible price? Arthur C. Clarke’s famed science fiction novel Childhood’s End delves into that idea, and after a long wait, the story has finally arrived in its first television adaptation spanning 3-nights and 6 hours.

Mike Vogel and Daisy Betts star as Ricky and Ellie, a couple living on an average farm in the middle of Missouri when the alien Overlords arrive and choose Ricky to be their ambassador to the world. Amid the strain of the attention, and the strange nature of his new role, not to mention his relationship with Karellen (Charles Dance), the Overseer for Earth, Ricky and Ellie have a difficult time together.

That relationship between Ellie and Ricky, and Karellen too, is front and centre in this big, futuristic story, and it’s what makes the series so watchable.

Read my interview with Vogel and Betts below to find out what it was like to make the series, and how

Childhood’s End also stars Yael Stone, Julian McMahon, Osy Ikhile, and Colm Meaney. Watch the finale of Childhood’s End on Showcase tonight at 8:00 (ET) and 9:00 PM (PT), or head over to the Showcase website to watch the episodes.

Andrew Powell: Ricky and Ellie–obviously their relationship is at the core of this story, even though this is also a story about otherworldly beings coming to Earth. How much of that is easy to play when you’ve got a larger story to tell at the same time?

Daisy Betts: “I think it’s really crucial, Ellie and Ricky’s relationship, because it’s the thing that the audience can kind of hold on to and follow through in a very human way and they can connect to their relationship that the two of them have and see how that relationship is affected by this massive world event. It was cool for us to have that real life drama, but in reaction to something that’s so kind of unreal, it was not difficult–it was just kind of working off each other as you would if you were in a relationship that was kind of destroyed by something of this magnitude.”

Mike Vogel: “I think that, for me, the best sci-fi is sci-fi where you can relate to what’s happening. If it leans so heavily on… this is just me personally, where I get lost is when it’s all alien-focused and bing-bang-boom event-focused. I tend to tune out. When there’s real people reacting to very surreal circumstances, that’s what draws me in. Not just our relationship, the other relationships throughout the other episodes, I think, are important. Each one represents, whether it’s fate, whether it’s science, whether it’s love, these relationships represent a different thing in how it related to a larger event that happens. I think it has to have those things in order to be one.”

Andrew: The night one episode really is an introduction to this idea of the golden age of man. Can you describe a bit of what that’s like for the characters and also what they think about this golden age?

Daisy Betts: “Well the golden age is supposedly a utopia where man is given the solution to all the world issues at the time. World peace is created.”

“Famine, injustice, violence–all these things are eradicated. People are living harmoniously in the world and really they should have no issues. What comes up is that there are issues. Everything is not so rosy. We see how that unfolds. For Ricky and Ellie, in particular, their life is different. Their experience of the utopia–the supposed utopia–is unique because Ricky is obviously the messenger and he has this other kind of life–not life, but the situation that he can go to in the ship, and so it’s kind of tearing their relationship apart, in a way, and nobody else is really experiencing that on that level.”

“It kind of gives a different perspective on that golden age. For them, I think they just want to go back to the way it was before because they had a bit of a golden age before the overlords came.”

Mike Vogel: “Yeah, I think the basis that has gone on during the filming of this, as persistent actors, when you’re given… when everything is fixed, you’re given perfection and utopia. After all that is said and done, is that something that you wanted? Is that something that you really like when all is said and done, and I think at least for Ricky and Ellie the answer would be no.”

“It was a new, shiny thing initially when it was happening and it was really amazing because all sickness was cured, violence was done away with, and famine ceased to exist. You get on the other end of that and the result of that is this bland homogeny where everyone has just kind of melted into one thing and you lose the things that make us unique. For some people, that may be great. For me, it just sounds boring.”

Daisy Betts: “Yeah, and we see that in night three–we can’t talk too much about nights two and three–but we see people’s reactions to that. We have a lot of different storylines that we follow. We see how it interferes with the family dynamic, we see different relationships, and how people kind of push back and get the utopia that the overlords create.” 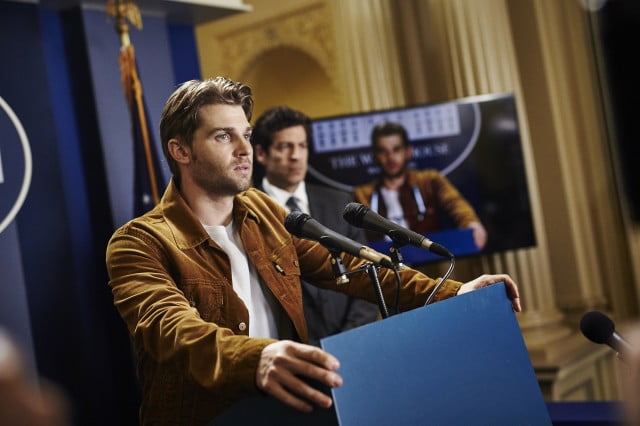 Mike Vogel: “It goes through many different stages. I always had a problem with how quickly Ricky gets on board with this thing. I think he finessed it fairly well.”

“Karellen wisely withholds the appearance of these overlords until much later–15 years later–because as he said, we’ve seen the effect our appearance can have on people. I think had they revealed themselves early on, the game would have been over at that point. He hangs in there long enough where he and Ricky almost forge a friendship where he appreciates Ricky’s honesty and his brashness and sort of the simple man that he is, and Ricky learns from Karellen.”

“Karellen’s a guy that, through the ages, has been going for eons and eons and eons through civilization and civilizations, so Ricky gets the wisdom of all of Karellen’s past experiences until, as we get into nights two and three, we start to see that there’s a little more demanded here than what Ricky initially thought and there’s a higher price to pay to it all which changes the relationship dramatically from a friendship to almost–they almost become, not enemies, but the friendship kind of maintains, but it’s very strained from that point on.”

“We’ll see if people see nights two and three–they’ll see that change. I think, how do you relate to these beings that look like that and have that be believable, [and that] was a huge challenge to overcome, and I’d like to think that we did [make it believable]. I think by making Karellen personable, making him that he’s almost enamored with humanity, he almost envies humanity, the capacity that humanity has to love. All of the other crap that we have down here, at the end of the day our ability to love deeply, which is in all of us, is one thing that Karellen looks at and is envious of.”

“It’s neat to see him learning from humanity and when he comes here, to basically cut all the fat out of what we screwed up. It goes to show that the strongest thing in all of us is the most powerful thing that interests this being from another planet who has done this for eons and eons at the time.”

Andrew: The last thing I wanted to ask you is just what was your favorite part about making this series? It does look like it must have been quite a bit of fun.

“I always felt like, my role, I wasn’t on set as much as Mike was, so I definitely felt this need to bring some levity to the situation. Not necessarily on screen because a lot of stuff that I had to do on screen was pretty sad and powerless and it was kind of depressing at times.”

“We were in Australia for 3 months, so that was awful [laughs]. Surrounded by beautiful scenery, great sets, great people, great creative minds in Matthew Graham, our writer, and Nick Hurran, our director. They just had a really strong vision for this show. It’s a big task to take on.”

Daisy Betts: “The production value is so high, and it was just an amazing thing to be a part of. The best part of this project, for me, is that sometimes you’re part of a project and as it goes on it doesn’t quite live up to what you expected and this is the opposite. I had no idea of how great this was going to be when I got on board, I just was interested in going to Australia, but now just seeing it and talking about it and realizing the place this holds in the sci-fi world, I’m so excited about the launch. I can’t wait for people to see it.”

Andrew: Do you have any favorites, Mike?

Mike Vogel: “Yeah. I think, for me, I had a lot of favorites while we were filming. I think the Australians are quite possibly the friendliest people I have ever met and I would know because I’m from Philadelphia where no one is friendly. A great experience being there, filming.”

“The surprise for me came finally getting to see the payoff–seeing the screening of it last month, and seeing it on the big screen; seeing the effects–what they were able to achieve, what they were able to pull off. A lot of the little pods that we were travelling around in and everything, it was a little glass box, that as we’re doing it I’m staring at this thing going ‘this is going to look absolutely ridiculous, there’s no way this is going to work’. How seamlessly they integrated things into it was one of my favorite things, getting to watch how that all paid off. These effects and the ability to do these things used to just be relegated to 200 million dollar movies, but now you can achieve that on really great television, I think only ups the ante and the viewing experience for the audience so I think that was one of the things that was my pleasant surprise after all this was said and done.”

Andrew: Well, thank you very much.