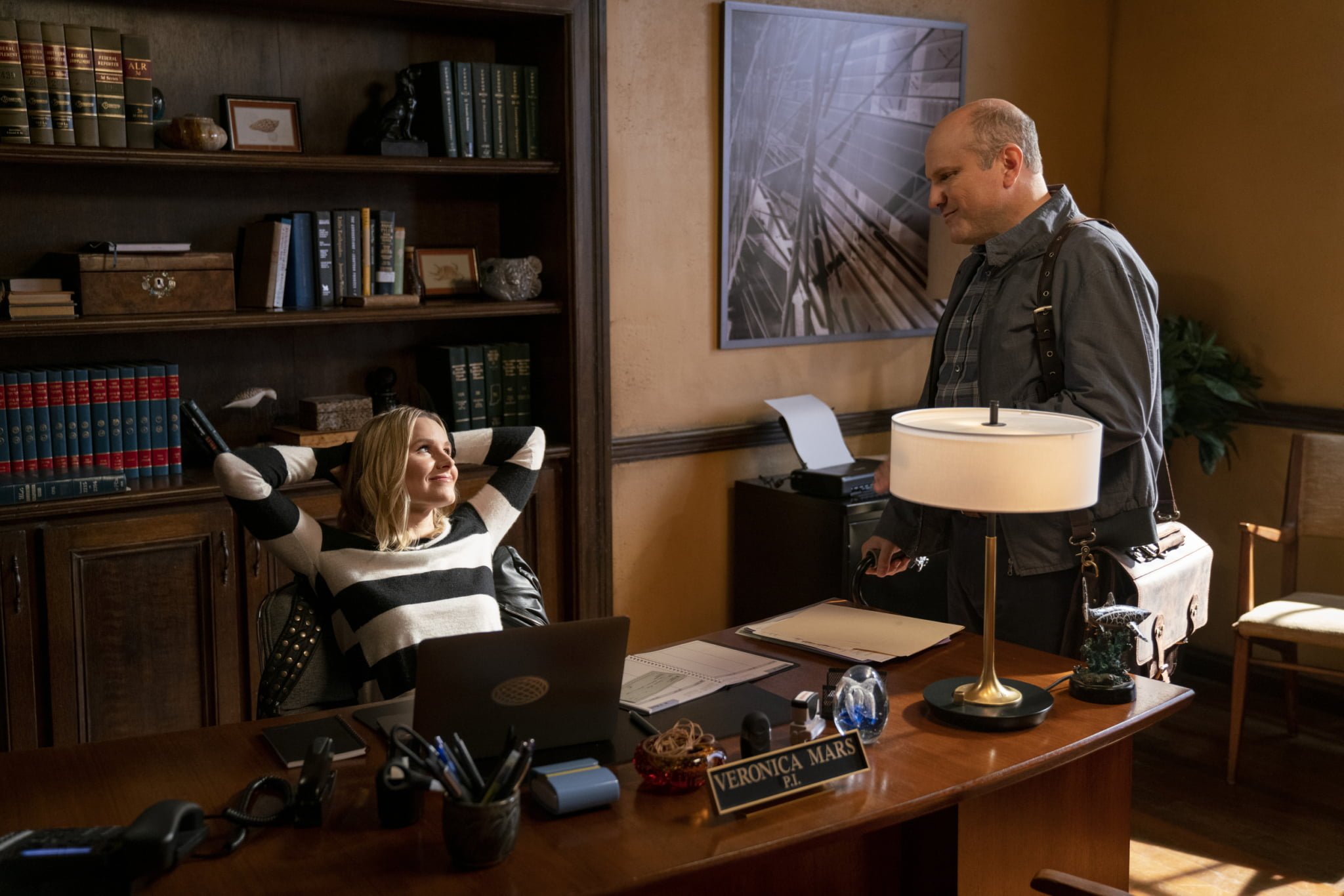 The highly anticipated fourth season of the beloved detective show Veronica Mars (which dropped suddenly and one week earlier than expected this past Friday) should give the titular character’s loyal “marshmallows” plenty to be happy about and leave them wanting more. With series creator Rob Thomas offering up the most captivating season of the show since the one it premiered with all the way back in 2004, Veronica Mars makes the move from network broadcast to streaming services with a renewed vigor and swagger. It’s commonly joked that these days all people want to do is make gritty reboots of popular, nostalgic intellectual properties. Season four of Veronica Mars serves as its own gritty reboot, and the new edge suits the characters well without compromising what made the series such a phenomenon in the first place.

Veronica Mars season four picks up not too long after the events of the character’s big screen outing from several years back. Veronica (Kristen Bell) has decided to stick around her old hometown of Neptune, California and help out her private investigator father, Keith (Enrico Colantoni), run the family business while he recovers from being shot. It’s a volatile time to be living in Neptune, and not only because there wouldn’t be a new season of the show without a violent catalyst. Ex-con and real estate tycoon “Big Dick” Casablancas (David Starzyk) has recently been released from prison and is now leading a campaign to clean up the streets of Neptune by buying up businesses all over the town’s disreputable boardwalk, which has traditionally been a major SoCal spring break destination. When Casablancas comes back into everyone’s lives – flanked by a shady, but unusually cheerful “assistant” (J.K. Simmons) – local business owners push back against the gentrification plans disguised as morality based legislation, insisting that the town (and their establishments) would die without the money earned during spring break. Just as the latest batch of drunken revellers come to town, a bomb goes off in the lobby of a boardwalk hotel, killing four people: a lecherous sex offender, a nerdy kid who just wanted the Wi-Fi turned back on, the white trash fiancee of the brother of a U.S. congressman of Middle Eastern descent (Mido Hamada), and the hotel manager. For a variety of reasons tied to cases they’re currently working on, Veronica and Keith find themselves at the centre of a long reaching conspiracy with a lot of moving parts, conflicting interests, and hidden secrets.

There’s a lot of ground for Thomas, his writing team, and his episode directors to cover in only eight episodes, and while season four of Veronica Mars falls into a lot of the same “hurry up so we can wrap this up” problems similar series operating in a short amount of time face, the core mystery of the series’ latest arc is far and away the best since the show’s debut. The interlocking threads of Veronica and Keith’s new case is positively bonkers if one wanted to describe it, but Thomas and everyone involved have found a way for everything to make (more or less) perfect sense by the time reveals start piling up and leading to new, unexpected twists and wrinkles.

The plot of Veronica Mars season four isn’t just about the hunt for a mad bomber and serial killer mixed with a healthy dose of Trump-ian subtext about the free market economy run amok. It also involves a hillbilly family trying to steal a valuable engagement ring that doesn’t belong to them, a pair of ruthless Mexican sicarios (played by Clifton Collins Jr. and Frank Gallegos, who steal every scene they’re in by playing their parts as if they’ve been trucked in from a Coen Brothers movie) sent to find the bomber who killed the nephew of a cartel boss, a low level thug who likes to shit in ice machines, a discount grocery store with a rat infestation, a tavern owner (Kirby Howell-Baptiste) with a low tolerance for sexually abusive patrons, a pizza delivery man (Patton Oswalt) who survived the hotel bombing and has an unhealthy obsession with trying to solve cold cases alongside his true crime loving buddies, and the hotel owner’s daughter (Izabela Vidovic), who wants to conduct her own investigation and bring her father’s killer to justice. 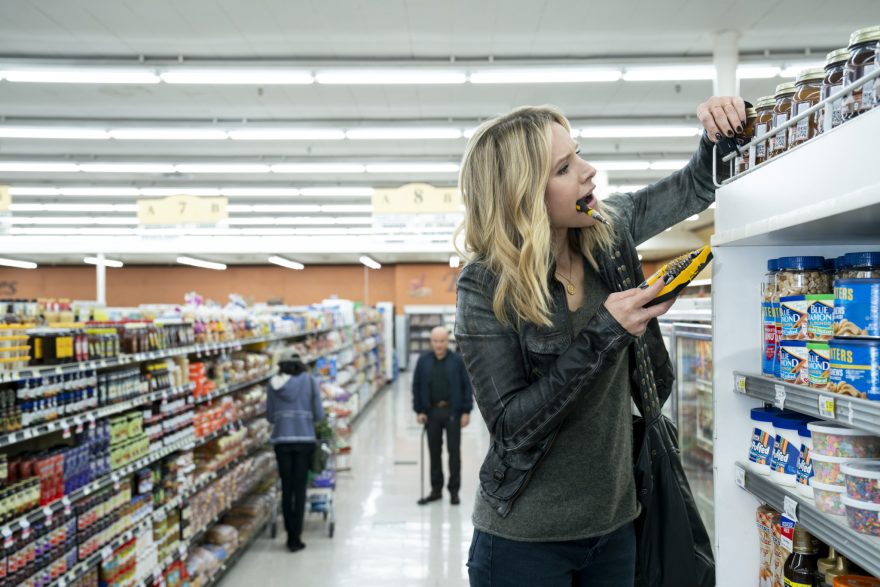 The characters played by Baptiste, Oswalt, and Vidovic are all fine additions to Thomas’ Neptune universe, since Veronica can see a little bit of herself in each of them. She constantly clashes with them, and all are made out to be credible suspects in the case, but when they work together, they gel rather well. At the same time, Veronica worries about her father’s failing health and memory, and she’s still trying to figure out what comes next with her long term beau, Logan Echolls (Jason Dohring), who returns from his latest military deployment and finds his marriage proposal rebuffed. Plenty of other familiar faces will float in and out of Veronica’s life throughout her investigation – some friendly, some not, some still trying to decide what angle they want to play – but Thomas has built the latest season of his show firmly around those five core relationships, and all of them are expertly written and performed, especially by Bell who reclaims the throne as one of the best performers ever to get top billing in an hour long drama, and by Colantoni and Dohring, who haven’t lost an ounce of their effortless chemistry with the leading actress.

Veronica Mars season four doesn’t have too many call backs to the movie that preceded it, and that feels like the right call on Thomas’ part. The movie was a good, effective, and well made bit of fan service; a thank you aimed squarely at those who stuck around and wanted to see more of these characters despite a lengthy sabbatical. Veronica Mars season four is all about getting down to business and progressing these characters and their problems for future installments. It’s about updating the world and showing how everyone except Veronica has changed over the years. Logan and Keith have grown a bit softer and wiser, but Veronica, despite being more cautious and prepared than ever, hasn’t changed much as an adult. Season four might not be what the fans envisioned for the character going forward, but it feels like something that needed to happen to bring the show up to speed and sketch out a realistic progression for everyone in Veronica’s life.

To talk about how that works really starts to get into spoiler territory, which I have no interest in doing, since the numerous twists and more intense than usual pacing of the show are best experienced without knowing what’s going to come next. The dark humour of Veronica Mars remains intact here, but the show itself hasn’t felt this intense since it’s debut. In many ways, this season provides a greater context for the show’s less popular third season, the ghosts of which are felt in pretty revelatory ways in this season. It’s a good blend of snappy banter, serious and timely subject matter, and sometimes twisted storytelling sensibilities that enhances everything that came before it instead of merely adding onto a pile. It’s also delivered with a slicker look at style than previous seasons, with the show looking more stunning on a visual level than it ever has before. There’s a renewed confidence, which also extends to a lot more cussing (including a great running gag throughout the season that revolves around a bet Keith and Veronica have about who can refrain from swearing the longest), more explicit sexuality, and some truly gory and grotesque violence that doesn’t hold back or sugarcoat the deadly nature of the case at hand.

Veronica Mars is no longer a show aimed at a teenage audience. It’s a show that has aged with its fans into adulthood, and one that heavily implies that Veronica will be sticking around in some form or another for as long as her new streaming service overlords will have her. Unlike the film version of Veronica Mars, season four isn’t a thank you. It’s Thomas and company rolling up their sleeves, getting back to work, following their guts, and doing something greater than they’ve ever done before.

All eight episodes of Veronica Mars season four is now streaming in Canada on Crave and in the United States on Hulu.

Check out the trailer for Veronica Mars season four: