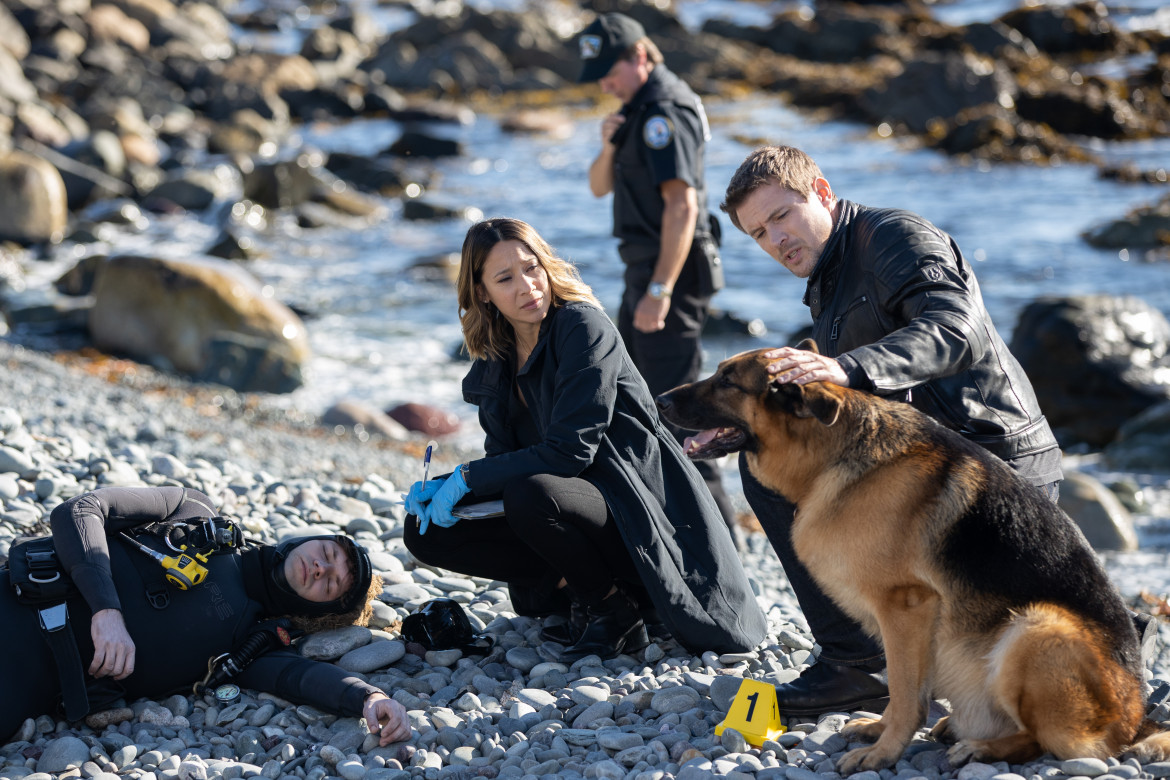 On this week’s Hudson & Rex, our boy Rex is at the centre of a murder investigation as Sarah discovers dog fur on a murder victim’s body, before investigators arrived on the scene. When the dog fur matches Rex’s DNA, Charlie and Rex have to dig deep for an answer, and end up going undercover to solve the case.

At the start of the season, I had a chat with Justin Kelly and Mayko Nguyen, who play Jesse and Sarah, to find out about season three, the challenges of filming during the pandemic, and a bit about working and living in St. John’s, Newfoundland. As you can probably guess from the show, they both had wonderful things to say about the locations, and the sense of family on set.

“We were reminiscing about this the other day,” Kelly said. “We started this show two years ago in October, we started filming in Newfoundland. It feels like it’s flown by, and equally it feels like it’s been years. There’s not many shows where you get to do 16 full-hour episodes, and we’re working 6 to 7 months out of the year.”

“I’m an east coast guy at heart. I was born and raised in Toronto, but I felt right at home there right away. I love the music scene. It’s a stunning province. The fact that we get to wake up, go to work, and suddenly we’re filming right by the Atlantic ocean–that honestly never gets old.”

“The cast and crew are just the lovliest,” Nguyen said, “and I’ve been on the show long enough now that it feels like a family.”

“Our friendship gets deeper and deeper; Charlie and Sarah,” she said. “They get closer and closer as friends, and then we hope that other things happen, but we never know. There are some really great episodes… where the team really has to come together to get out of some tricky situations.”

Actor John Reardon, who plays Charlie on the show, also spoke to me at the start of the season about working with Diesel, the dog who plays Rex.

“It’s interesting–after a couple of seasons, we’ve become quite intuitive with each other. He anticipates a lot of things that I’m going to do. Often times, when I leave a room, he just follows me; there doesn’t need to be a command. We have a bit of a rapport now.”

“If there’s one thing that I’d say about this season is that people will really respond to the stunts,” Reardon added. “We’ve taken it–Sherri [Davis, Diesel’s owner and trainer] and the dog crew–have taken it up a notch, and there’s some pretty spectacular stunts that people are going to love this season.”

Watch all three interviews with Justin Kelly, John Reardon, and Mayko Nguyen below. “All in the Litter,” the seventh episode of Hudson & Rex season three, airs on Citytv Tuesday, February 16 at 9 PM (ET)/8 PM (CT). You can also stream episodes on Citytv.com.