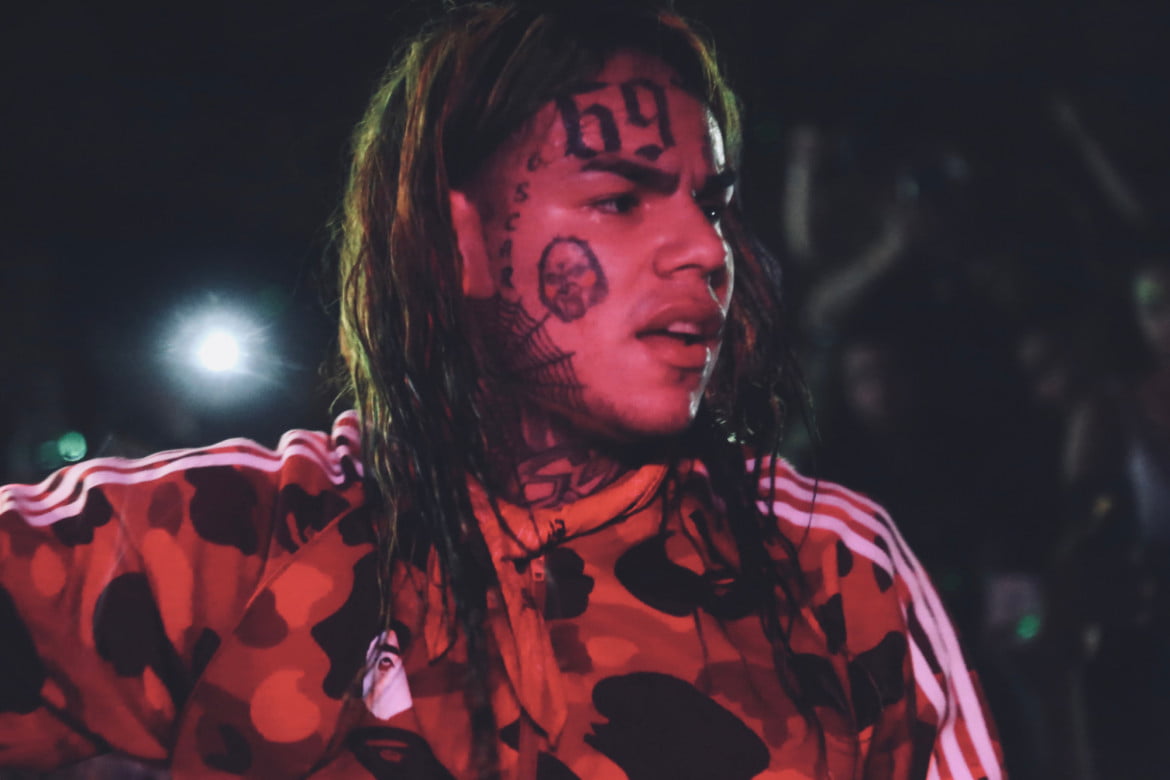 Karam Gill’s three-part documentary miniseries Supervillain: The Making of Tekashi 6ix9ine takes a scathing, detailed, and uneasily compelling look at one of the most hated and unquestionably successful artists in the history of hip-hop. Say what one might about the rainbow haired, style obsessed, and openly confrontational nature of Tekashi 6ix9ine (and believe me, there’s plenty to say), but he’s definitely an artist who has chosen an image that he wants to present to the world loudly and proudly. With Supervillain: The Making of Tekashi 6ix9ine, Gill (G-Funk, the upcoming Ice Cold) assembles a cautionary tale for the social media age; the story of a young man who mistook infamy and an overinflated sense of self for actual fame.

Gill begins by looking at Tekashi 6ix9ine – real name Daniel Hernandez – from a psychological perspective before taking a more journalistic approach. When he was a young half-Puerto Rican/half-Mexican kid growing up in the Bushwick section of Brooklyn, Hernandez didn’t start life with a lot of positive influences. His father, Daniel Sr. (who appears for an interview), left when Hernandez was young due to heroin addiction. Young Daniel would find a more positive role model in his stepfather, who would frequently take him to the movies and spark a love affair with cinema and images. Daniel’s life reached a pivotal crossroad when his stepfather was shot and killed in broad daylight. Disillusioned and distraught, 6ix9ine was born in earnest; a way for Daniel to play the villain role. In his own words, “Fuck being a superhero. Villains never die.”

Tekashi 6ix9ine fancies himself as a modern day, real world incarnation of Batman’s nemesis, The Joker, and for the purposes of this documentary, Gill humours Hernandez to an extent while showing the error of his ways. Through some memorably flashy inserts that take place in a laboratory and occasional, but always welcome narration from Giancarlo Esposito (a perfect choice), Supervillain: The Making of Tekashi 6ix9ine goes through all the ingredients needed to make a powerful, influential, and dangerous human being. Starting with Hernandez’s early days as a struggling bodega clerk who made purposefully offensive and confrontational streetwear, Gill shows how becoming one of the most divisive and widely loathed people on the internet doesn’t happen overnight. It takes a lot of other people to make Danny drift away and for “the troll king of rap” to take over his entire persona.

Those additional backers initially came in the form of the Trey Nine Bloods, a gang that Hernandez affiliated himself with in a bid to boost his credibility when his career goals shifted from fashion to hip-hop. This is all despite the fact that – by his own admission – he was never a great rapper, and was more in love with punk rock than hip-hop. Hernandez was embraced by Seqo Billy, a Bloods member who wanted to start his own record label, and “Shotti,” a high ranking lieutenant of the organization with aspirations to become the east coast’s answer to Suge Knight. It’s at this point in Gill’s documentary (which isn’t the only series about Tekashi 6ix9ine to debut in the past year, although it’s the only one available to view in Canada) when psychological observation is less necessary than a simple observation and statement of facts.

Based on a Rolling Stone article by journalist Stephen Witt and built around on camera interviews with those closest to Hernandez, Supervillain: The Making of Tekashi 6ix9ine is the story of someone who thought they could say or do whatever they wanted because they had a powerful organization backing them up. With a flamboyant persona custom made for today’s increasingly hyperactive “attention economy,” Tekashi 6ix9ine sought to push the boundaries of tact and good taste by attacking anyone and everyone in the most basic and openly hurtful ways via his infamous Instagram feed; a platform that now does better numbers than his once lofty music sales. The more Hernandez antagonized people, the harder it became for even a gang to defend him. That persona also made him successful to a point where it created an internal struggle between Billy and “Shotti” over the direction of Tekashi 6ix9ine, someone who was treated more like an extended family member of the Trey Nine Bloods than he was an actual member. In spite of the support they showed him, Hernandez’s affiliation with the gang he loudly and proudly claimed allegiance came to an infamous end when things became dangerously real, and Tekashi 6ix9ine would become one of the biggest snitches in hip-hop history.

While it’s not necessarily an eye opening revelation, everyone who knew Hernandez during his early days describes him as a decent kid who went down a dark path. The tone of Gill’s series is damning and skeptical throughout with only light touches of sympathy. Gill states the established facts and makes it known in no uncertain terms that Tekashi 6ix9ine is anything but a tragic figure. Hernandez has relative control over his platform and displays an undeniable amount of charisma and star power, but his severe persecution complex was in place long before he started fearing for his safety. His idea of “beefing” with someone was to take a tragedy or shortcoming of one of his targets, laugh at it annoyingly, and then tell the aggrieved party to “fuck off” before bragging about his own hollow success. Supervillain: The Making of Tekashi 6ix9ine is the story of someone who settled upon the wrong kind of fame simply because it gave them the sort of attention they craved. Not even a supervillain can get away with telling all of the people who supported them to fuck off in one fell swoop without consequences, especially when a lot of those people are in one of the most notorious, well connected, and established gangs in the world. The fallacy that you can talk all the shit you want as long as there are people willing to back you up in a fight will only take someone so far. Just ask someone that Tekashi 6ix9ine openly states his admiration for: former president Donald Trump.

Regardless of the fact that there are no real heroes in the story of Tekashi 6ix9ine, by the time Hernandez’ long term girlfriend and child are threatened and the rapper starts getting into skirmishes at airports and arenas, it’s impossible not to feel like this is a deep dive into someone who brought all of their misery onto themselves. Although people still want to see what he’ll do next, no one really wants to listen to Tekashi 6ix9ine anymore. In recordings made during an interview conducted while under house arrest, Hernandez says that the public never sees young Danny; only Tekashi 6ix9ine. What’s staggering is how little he realizes that it’s his own fault. Or perhaps more damningly, how little he cares. Reality has no place in the world of someone who treats their life as an act, and Supervillain: The Making of Tekashi 6ix9ine is a stern warning to anyone who might be thinking about becoming Insta-famous for all the wrong reasons: never believe your own hype.

Supervillain: The Making of Tekashi 6ix9ine premieres on Crave in Canada on Sunday, February 21, 2021 at 10:00 pm EST. It airs on Showtime in the U.S. 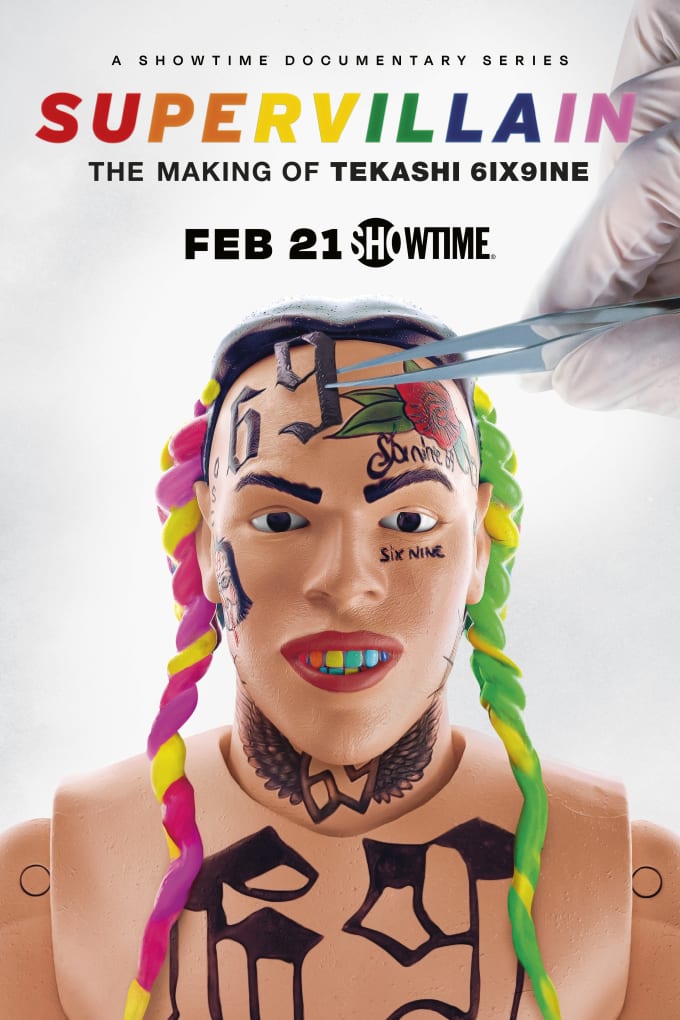