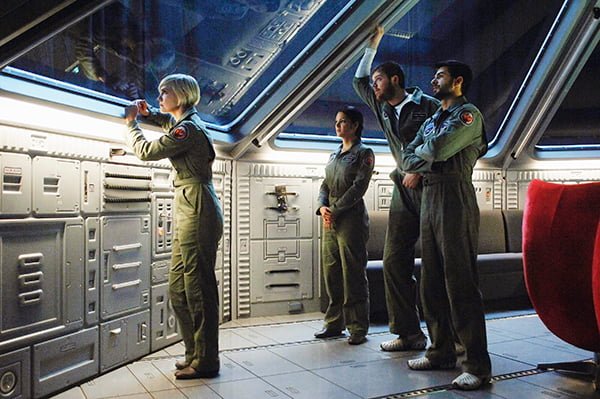 A scene from the pilot of Defying Gravity

Every great TV show has at least one gotcha – a striking characteristic that makes the show unique. Most dramas stick to dynamic character relationships and clever plot twists, but if you look at more quirky shows, including science fiction, the gotcha becomes even more fantastic: time travel, monsters, and supernatural creatures are just a few that spring to mind.

Which brings us to Defying Gravity, the new joint series running on CTV in Canada, and ABC in the United States. Crossing the line between drama and science fiction, the intriguing series plays a slew of cross-genre gotchas, all while trying to please potential fans on both sides of that divide.

Dubbed “Grey’s Anatomy in space,” mainly because it was created by James Parriott, who also executive produced Grey’s Anatomy, the series has a group of eight astronauts in the not-too-distant future headed on a massive trip around the solar system on a ship called the Antares. Set to travel more than eight billion miles, on a trip that will culminate with their arrival at Venus, the group of astronauts will be challenged to keep their wits about them, while also reigning in their libidos on the six-year mission.

Defying Gravity has an added gotcha in the sense that the series takes place in both the past and the present, looking at how the astronauts first got involved in the mission and where it leads them.

Finally, the biggest gotcha of all is the show’s mysterious “other,” an entity, creature, or perhaps even a device that has been hidden away in the ship’s storage pod four, and will only be revealed to the entire crew once they reach Venus. Otherwise, only the mission commander has any clue what is really going on, and how this “other” is involved in the trip.

The show’s priority, however, is in the interplay of characters among the huge cast, which includes eight astronauts, and the mission control staff. In the pilot, this interplay gives you a pretty good idea that there have been some messy relationships in the past, and there are bound to be some even messier problems in the future.

Leading the story is Maddux Donner, played by Ron Livingston, a veteran astronaut with the dark distinction of having left two crew members behind on a mission to Mars. On top of that, while he helped train the new recruits, he has been overlooked for the big mission, and only ends up on the trip when two crew members are forced to back out under mysterious circumstances.

Meanwhile, Laura Harris plays Zoe Barnes, a geologist who has a one-night stand with Maddux before she realizes she has been chosen to take part in the flight of the Antares. After that, their relationship becomes increasingly difficult as they find themselves drawn together. What’s worse, however, is that once Zoe is on the Antares, she begins to hear things that simply cannot be there.

Beyond those two, there are lots of interesting characters, but it’s hard to discuss all of them without getting into a long-winded story. However some of the main cast include Malik Yoba as Ted Shaw, the other last-minute replacement on the Antares trip, and the leader of the mission, not to mention Maddux’s long-time friend, who also flew on the Mars mission.

Christina Cox plays Jen Crane, Ted’s former girlfriend before they both married other people in the program. And Florentine Lahme is Nadia Schilling, the ship’s ace pilot who plans to compete for Maddux’s attention over the coming years of the trip.

On another note, the show seems to have a definite fixation on genetics, biology, and most importantly, the morality of playing God with science. Throughout the pilot episode Zoe hears a baby crying on board the Antares, this following the fact that she got pregnant during her training and may or may not have had an illegal abortion. In the second half of the pilot we also learn about a genetic test being carried out on the mission which has Jen destroying undeveloped rabbit embryos, something that one of the crew members finds a little appalling.

All of these elements make Defying Gravity a bit of a wonderful mess. On the bright side of this mess, the series is a clever mix of genres that always feels like it’s a natural meeting of drama and sci-fi. The cast is also very good, making the best of the show’s script, and pushing the criss-crossing relationships in the best possible directions.

Speaking of the cast, I’m particularly fond of Livingston in this role, as he plays the hero exceedingly well, especially as the quiet everyman who is just trying to do the right thing while enjoying life.

Harris is another favorite to be sure, making Zoe both likable, but also genuinely troubled in a way that is scary, but somehow endearing.

The show’s special effects are also very, very good. There are only a couple of moments that miss their mark, but overall the effects are top notch, and the space scenes look amazing.

On the flip side, the series has some serious flaws. The biggest problem is that the characters, and some of the important plot developments, feel very one dimensional. There are many moments where you can almost feel the writers jeering at you from the other side of the screen as they push the “fate” angle, or a similar concept that’s been pushed into play by the “other” we can’t identify. I don’t want to call that a lazy tactic by the writers, not exactly, but it shows that they could have been more clever in their approach.

Overall though, I quite enjoyed Defying Gravity. It has a lot of room to grow, the concept is intriguing, and as gotchas go, the series knows how to work the angles. It’s certainly got me hooked enough to come back next week to see where they’re going with this spacey soap opera.