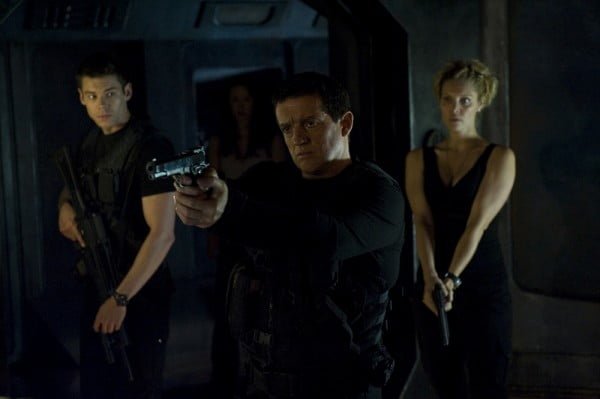 Last week’s Stargate Universe episode, “Space,” marked the beginning of the second half of season one, and also set the stage for a very different chain of events.

While the first half of season one was dominated by the getting-to-know-you episodes, we’re starting to see a little more action in this new chapter as the soldiers and civilians of Destiny face off against a hostile group of aliens who are seemingly following them around the universe. We’re also seeing a lot more heat in terms of the dissention spreading through the ship as the civilians consider how much they want a military leader making decisions for them.

This week’s episode, “Divided,” runs with both of those important plot lines, and makes things just a notch more interesting for everyone on Destiny.

It all starts off as Chloe, played by Elyse Levesque, wakes up from a nightmare where she is still being tormented by the aliens, who you might recall abducted her in last week’s episode. Not surprisingly, Dr. Nicholas Rush, played by Robert Carlyle, has been having nightmares as well since the aliens abducted him, and so the two start talking.

The problem, as Rush sees it, is that even though they escaped the aliens, he doesn’t think that was the last they will see of their blue hides. He says they are fixated on the Destiny, and he thinks it’s possible that they have found a way to track the ship.

Eli, played by David Blue, scans the outside of the ship using one of the kenos and discovers that Rush was right; there’s an alien ship clinging to the hull. Colonel Young, played by Louis Ferreira, decides he personally should jump in one of the shuttles to go destroy the alien ship, and he’s immediately successful, but there’s a catch.

As Young took off to deal with the problem, Rush executed a plan with the other civilians to take over the Destiny’s controls, and lock the soldiers away from everyone else on the ship. Although his plan seemed to be on-track, he didn’t count on one problem; Colonel Young and Matthew Scott, played by Brian J. Smith, were unable to dock with the Destiny while Rush was taking over the systems, and the ship was about to make the next jump through space.

As Eli put it, since the shuttle was unable to dock with the Destiny, Young and Scott would likely be instantly destroyed if the ship were to make a jump. Eli makes an attempt to help from his controls, but all they can do is beg Rush, who is at another station in the ship, to stop what he’s doing.

This is what starts a race for Rush to gain control of the ship without killing Young in the process. While Rush fights to take control, Eli tries to save Young, and tries to keep whatever systems he can from being turned over to Rush.

In the end, Young is of course saved, but the mutiny has really just begun, and aside from two people, all of the soldiers are completely locked away from the civilians. Rush and his crew also take over the water and food supply, while Eli is only able to take control of the life support system.

Compared to last week’s fairly epic episode, “Divided” is still action-oriented next to the season’s early episodes, but it relies on some great mood-setting confrontations to make you decide how you feel about the characters. Young and Rush don’t exactly have it out in the end, but any sense of stability left over from last week’s ending has been wiped away, and I can only expect that it will ultimately end badly, somewhere down the road.

This episode also left me feeling a rare sense of outrage as I wished I could personally throw a couple of main mutinous characters out of an airlock. That’s the feeling a show like this should instill, and I can’t help but feel a little amazed by how the writers and actors are able to push my buttons. Few shows have that kind of power over me, and I think it’s a big part of why SGU works so well as a character-driven drama.

Aside from that, the temporary menace of the blue aliens is renewed again, and then diminished again, which definitely bugs me since it feels like the writers are using the aliens as a cheap plot device, instead of putting them to better use or explaining them. It also does nothing to answer questions fans must be having about the ship, like why is it so important, how is it still operating after all this time, and what can it actually do?

While I’m content to learn more and more about the crew, and I still appreciate the direction the show is taking, it feels like we’re no closer to some answers about the Destiny, and that seems like a big deal this late in the first season.

In other words, the show already hooked me on the who, and the why, and SGU now just needs to seriously develop the what and the where before this vague set they’re standing on becomes monotonous.

Ideally, I hope Destiny can actually become a character unto itself, but perhaps I’m expecting a lot.