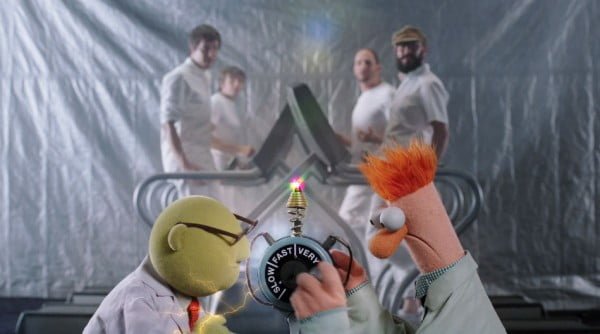 OK Go have made some kick-ass music videos, but as a fan of the Muppets I think I can safely say this is one of the greatest music videos of all time.

Call me crazy, but come on–OK Go rocking out with Muppets to one of television’s catchiest theme songs? All done in Kermit-style hues with Miss Piggy as a Valkyrie and multiple gag endings? That is some fine work, my friends, and if you loved that, I’m just going to suggest you may also love The Muppets: The Green Album, which has a bunch of other covers, including Weezer and Hayley Williams singing “Rainbow Connection,” The Fray doing “Mahna Mahna,” and… uhh, Amy Lee covering “Halfway Down the Stairs”? Check it out over on iTunes or, you know, record stores.

“Muppet Show Theme Song” by OK Go and The Muppets