After hours in press conferences, and on a few red carpets, I’m happy to say I’ve finally been to a few more screenings. Yes, actual films during the film festival.

The first one this morning was Lars and the Real Girl which turned out to be an amazing film. Ryan Gosling is great as the delusional Lars who imagines that his real doll that he ordered online is actually a real woman. Odd moments, but a hilarious and charming film, and I have to admit that I even got choked up a bit. Director Craig Gillespie and writer Nancy Oliver invest a lot of heart into the story, and take the delusion fairly seriously.

I also saw Run, Fat Boy, Run starring Simon Pegg. It was very, very funny – although perhaps not as funny as some of his other films, but director David Schwimmer makes the film a tad bit cheesy. Warmy, and cozy cheese, but cheese nonetheless.

And I also fit in two press conferences – Elizabeth: The Golden Age, with Cate Blanchett, and Sean Penn‘s Into The Wild, featuring Emile Hirsch. Got a few good shots, so I’ll have galleries online later, but for now enjoy the photos below. I’m now off to at least two more screenings, but may end up seeing three more today. 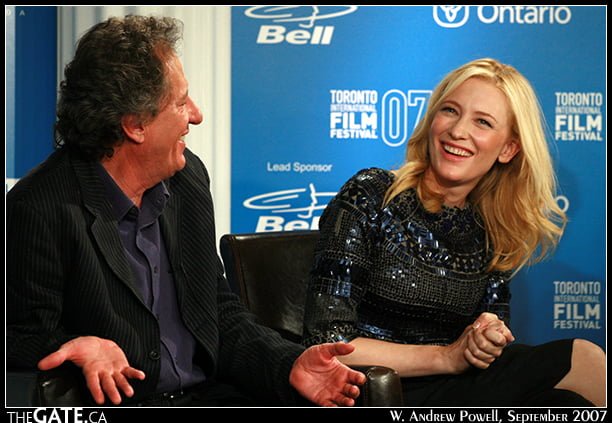