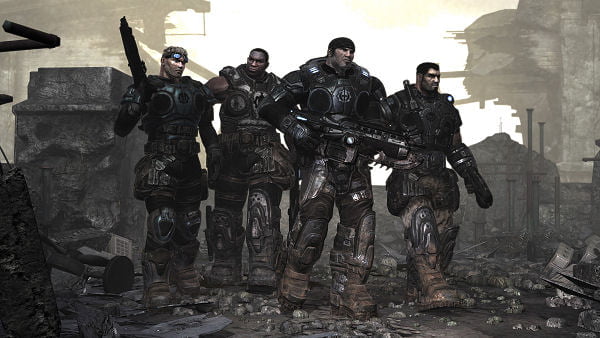 The Hollywood Reporter has revealed some grim truth to video game fans today: there is going to be a movie based on the hit Xbox 360 game, Gears of War and friends, I’m betting it’s going to blow Locust chunks all over the place. And not in a good way.

First of all, New Line is set to make the film, which is technically an offshoot of Warner Bros. Yes, that’s the same New Line that brought us that gem of film known as Blade: Trinity and Freddy vs. Jason. They’re a big studio, big enough to do this film, but as a production company they’re not known for producing quality action films, and their horror these days tends toward over-produced rather than clever. Maybe Warner’s involvement will help, maybe not, but as a base concept, this already give me bad vibes.

The next problem would be the choice of Chris Morgan to pen the script. So far, he’s written The Fast and the Furious: Tokyo Drift, a true craptastic experience, although it remains to be seen how me managed with the script for Wanted, which comes out soon. For me though, having written Tokyo Drift does not bode well for this possible film franchise bootup.

And last of all, they’ve chosen Len ‘Underworld‘ Wiseman as the director, who will also assist with writing chores. Now, he did rather well with Live Free or Die Hard, which was a decent action film, but perhaps a no brainer as well. On the plus side, I also adored Underworld, and I can see the connection between that film and a Gears of War movie. But, and this is a big but, he also wrote and directed Underworld: Evolution, which was really, really a lost cause (he also doesn’t know when to quit and wrote and is producing the next followup to that series, Underworld: Rise of the Lycans).

The article also points out one huge flaw in the plan to bring Gears of War to the screen:

“Video-game adaptations have proved a tricky art to master in Hollywood. Some movies have fallen apart because of creative and economic pressures (Halo) while others have not performed well at the box office (Doom).”

I give a lot of credit to Cliff Bleszinski from Epic, who commented in the article and points out that all we really need is for someone to take the material seriously and do it right. He points out in the piece that Disney made a franchise out of theme park ride, and I’ll admit to liking 2 1/2 of the 3 films they made there.

Here’s the difference though, while Wiseman is a not-too-bad pick for directing, and has a fairly similar resume to Gore Verbinski, how will Morgan compare to the rather clever scripts for Pirates of the Caribbean? Will the film feature a talented producer like Jerry Bruckheimer? Or what about a cinematographer like Dariusz Wolski (he also shot The Crow and Dark City, FYI)?

All I want to point out here is that Bleszinski statement is dead on. There are differences, but the comparison between a Gears of War movie adaptation and Pirates is apt. GoW was a fantastic game, even with its thin plot, and I’d personally rather see a Halo movie before anything else. But this does seem like a great opportunity for someone to finally make a game-based film worth watching, so hopefully someone involved with the adaptation will prove me wrong…

What are your thoughts, people?

Couple of notes:
1) Chris Morgan and Len Wiseman are doing a 2nd draft of a script treatment by Stuart Beattie, who wrote the screenplay for the first Pirates of the Carribbean movie….so, that kind of should put your fears to rest somewhat.
2) New Line also did Lord of the Rings, not exactly a clunker. Granted, with Peter Jackson at the helm it probably didn’t matter what studio was producing it. But, it’s also worth noting that New Line’s biggest liability in terms of execs, Bob Shaye, has been axed.

* all that said though, I’ll still reserve judgment until we actually see a trailer

Nice points, Russ – thanks. I agree on LoTR, the only reason I didn’t mention the film was based on trying to look at similar films New Line had made from the same genre. Still – should be interesting to see what happens.

I’m really looking forward to the new movie coming out next week. I know it’s really a prequel to the other movies, but it’s a different cast and some old favourites too. The poster and photos I’ve seen do look very promising. I hope it isn’t going to dissapoint like so many sequel/prequels do.
http://www.walrusfilms.com/movies/underworld-rise-of-the-lycans.html