HTC Touch: It feels so right 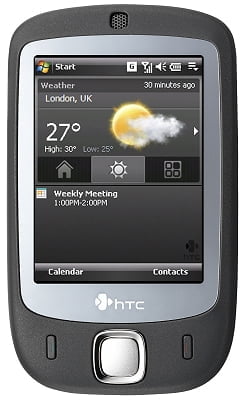 For the past couple of weeks I’ve been toying with Bell’s HTC Touch phone, and I’m a bit of a fan, with one minor disclaimer. My first impression has definitely been on the “wow” side of things though. I love the size of the phone, the controls are straightforward, and I like all of the features. The only place where the phone loses me is when I actually make a call and boom, every application on the phone opens.

For whatever reason, nothing I do will turn off the touch sensitive screen when there’s a call, and I end up with a mess of things to close.

Aside from that though, I have to admit this is a beautiful phone. The design is totally unique and the interface is really fresh, especially compared to the majority of lame-o phones available in Canada.

The biggest thing the phone has going for it has to be the touch controls, which make it pretty easy to move between all of the features. But I’m also a big fan of the Touch’s home screen, which shows the time, the number of new messages, running applications, and calendar, plus buttons to view local weather and the favorite application launcher.

With Windows Mobile running the phone it was also a huge boon to be able to work with Office documents right from emails, not to mention the very handy Outlook Mobile.

Aside from the screen issues while I was making calls, the only other flaws were the web browser, and the fact that, as with a lot of phones, the MicroSD card slot was buried under the battery. Neither of these facts surprise me, but it would be nice to see a cell phone that at least incorporates a better web browser.

For most people though, I can see the Touch being an ideal, fun phone. I get the feeling there is a way to not have all the applications open while you’re on the phone, and the touch sensitive screen works well for typing short messages with your fingers or the included stylus. If you like to be able to receive emails while you’re on the go, and take your calendar and some files with you, it’s also very handy.

This is no replacement for a Blackberry, or for people who want to write a lot of emails. It’s just a really great mid-level smartphone that actually blurs high end features with a nice phone design, and through Bell it won’t even cost you that much. The phone sells for $99 with a three year plan, and you can add unlimited email and web browsing for $30 a month.