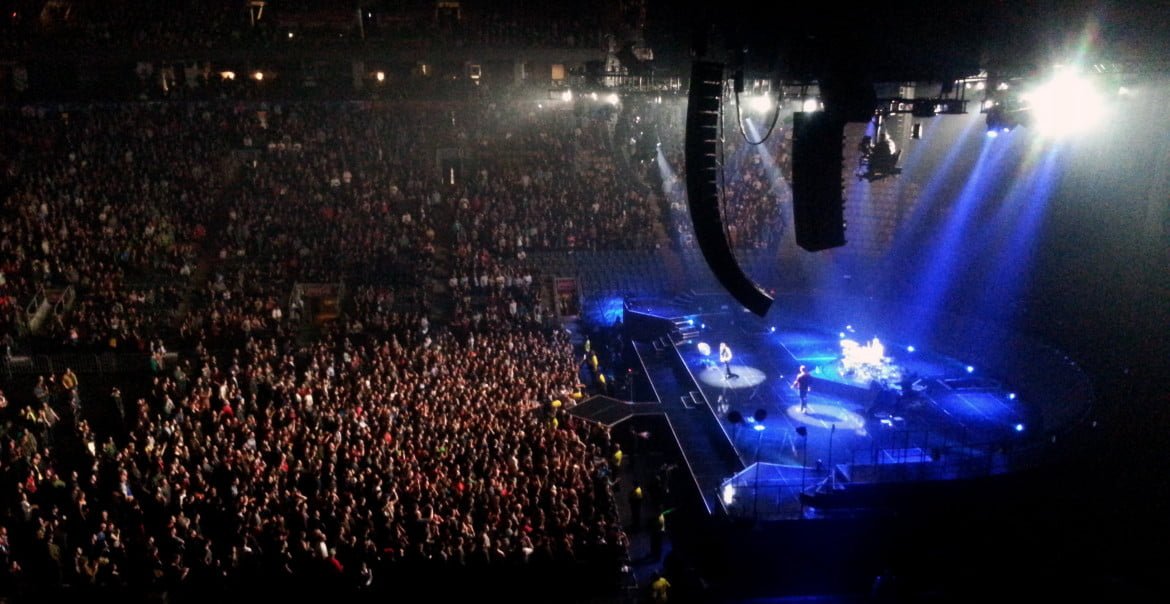 Ask me about the things that I love, and you’ll get a list of many, many things. Movies, television, games, actors, and yes, lots of music.

If I’m a fanboy for a lot of things though, I’m also truly, madly passionate about a much shorter list, and at the top of that list is Muse.

Since the first time I heard “Sunburn” and then, more importantly, “New Born”, “Feeling Good” and then “Time Is Running Out”, I’ve been addicted to their visceral, aching sound. They’re a powerful, complex, brooding band that sings about politics, love, and everything in between, and ever since the albums Absolution and Black Holes and Revelations, I haven’t been able to get enough of their music.

Last night, Muse played the Air Canada Centre, and it was an incredible show, worthy of a band that .

For me, Muse channels the operatic, over-the-top theatrics of Queen, for a new era of rock music. The similarities outnumber the differences, and while the tone is different, the heart of the music rings the same for me. They have the same operatic sensibility, with big stories, and songs that feel bigger than most songs by other bands. Both Muse and Queen were, and are, challenging, and engaging, and they seem to get better with age.

On stage at the Air Canada Centre, Muse had a pile of tricks up their sleeves, with instruments and props appearing through a trap door that even delivered Matt Belamy’s piano, for a few songs. The wrap-around backdrop, and a pyramid-like lighting unit that descended from the ceiling, were both covered in video panels that switched between showing video clips, the band, and random images, all music-video style.

The best lighting effect of the night though probably came from the audience itself, who–ahead of the last encore–used the flashes on their phones to practically light up the whole Air Canada Centre on their own. While I can only guess, it seemed like a sure call for Muse to play one of their most-loved songs, “Starlight”, which they obliged before asking everyone who would be back for their second performance, which happened tonight.

As concerts go, it was a hell of a show, and it’s a chart-topper in terms of some of my all-time favourite concerts. Compared against their own much smaller show at Arrow Hall in 2007, last night’s concert was telling of how much the band has grown and developed in a few short years. On top of that, Muse of 2013 has a much bigger catalogue of music that has evolved to the point where the band is one of my all-time favourite bands.

It’s hard to imagine how I’m going to feel about Muse the next time they come around, but if they continue as they have, the comparison to Queen, and some of the greatest bands of all time, is going to be a foregone conclusion. From my perspective, they’re one of the very few bands I would actually pay to see, and based on the packed crowd at the ACC, I’m clearly not alone on that one.