Live from the 2013 MMVAs press room 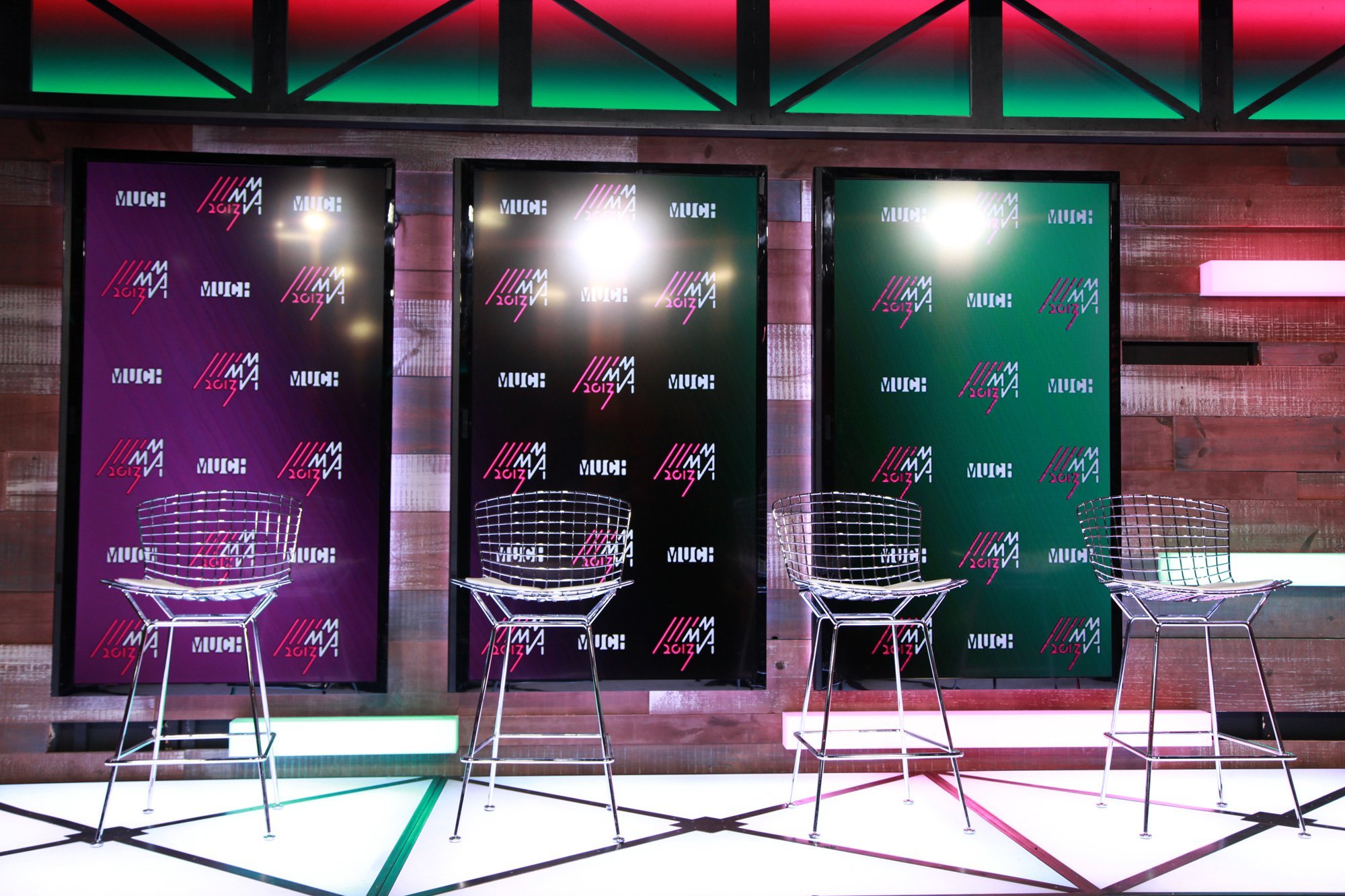 Welcome to my live blog of the 2013 MuchMusic Video Awards. Right now it’s 6:00 PM, and we’re still a solid three hours out from the actual start of the event, but I figured the early-bird gets the worm, so I at least have a good seat for the press room, where all the artists will be coming through for Q&As.

If the press room arrival list is to be believed (and often, it can’t be), pretty much every star coming to the MMVAs is expected in the press room, but that definitely may not happen. Most years, the press will see almost every star come back to chat, except for a few of the big names. So, Taylor Swift, Ed Sheeran, and Psy could be here, but I’m not going to bet on it or anything. My camera is ready though.

I’ll have updates after 9:00 tonight with photos, some quotes, and follow me on Twitter @thegate for more updates.

It looks like Mr. Teddy Wilson, from Space channel’s InnerSPACE will be hosting tonight’s MMVAs press room, which is frankly an amazing switch from the usual entertainment reporters. Nothing against the other hosts, but Teddy is just such a friendly, genuine person, I’m looking forward to seeing what he brings to the press room.

U bet I am! We're gonna have fun! "@TheGATE: Awesome. @TeddyWilson is host for the night in the #MMVAs press room. @SpaceChannel represent."

Also, the red carpet is officially under way, so watch your Twitter feeds for a preview before the real show starts at 8:00 PM.

Red carpet at the #MMVAs with the MTV News crew! pic.twitter.com/zgyX4Rsdbk

Just had a visit from my fave Warner Music PR friend, who was reading my posts. We actually go back a ways because he used to be a press guy too. Now I’m looking forward to seeing his star, Ed Sheeran in the press room tonight, since he confirmed the singer will be coming back. Otherwise it’s still quiet back here. The red carpet has wrapped though and press are slowly settling into spots in the media room.

I’m also getting questions about whether there will be video from the MMVAs. The answer is of course, yes! You can find the “to be filled” playlist on YouTube. Expect between 10 and 20 videos of as many stars as I can catch (which means, most of them). Maybe I’ll break a million video views with these new videos? Right now The GATE has 500,000 video views on YouTube, which I’ve earned in about 7 months.

The red carpet show is almost done, but I just had to rant for a moment about how they gave the lovely Serena Ryder a trophy on the carpet, and then cut away from her talking (putting her in a box on the side of the screen) to show Taylor Swift being interviewed. I’m sorry, but does an award winner not trump random red carpet shots? Give the amazingly talented woman some time, especially if you’re going to honour her music.

Ryder represents one of this year’s token actual talents, of course, aside from the string of one hit pop singers. While Taylor Swift is actually a legitimate talent too–even if she has gone to bubble-gum pop songs right now–I still resent the whole idea of diminishing Ryder, and MuchMusic’s own award. It says to me the award actually isn’t important enough to focus on for 30 or 45 seconds.

Just waiting now for the first stars, but in the mean time, here’s Teddy Wilson introducing himself in the press room. First guy to host the press room ever at the MMVAs.

Sorry for the lapse in posting, but first there was nothing to report, and then we had a deluge of stars, one right after another.

The problem is, now that the stars are coming back, and the schedule has basically been thrown out, we never know when we’ll have five seconds in between things to write anything. Since I’m taking photos, video, and writing, that means that I have almost no time to update the live blog.

Stay tuned though. I’ll have a lot more updates after things slow down a bit.

The stunning @serenaryder backstage and talking about getting through tough times with music at the #MMVAs. pic.twitter.com/gV9NPs6yc1

One quick update. Avril Lavigne just left the room, and now Classified is her to chat next. No stop in sight.

@AvrilLavigne talking to press at the #MMVAs and about now versus then. pic.twitter.com/4Ldl8jtonA

Well, my laptop battery is dying, my camera memory is getting full, but I’m getting lots of good stuff. Classified, David Myles, and music video director RT just left the press room after talking about the insane success of “Inner Ninja” and how they never expected it to be such a positive hit.

Before that, Avril Lavigne was backstage, but she had a kind of “moderator” in the form of one of the Sony Music Canada PR folks picking who could ask the next questions. Frankly, I don’t get that, but whatever.

On the bright side, she admitted she has a song called “Hello Kitty” coming up on her next album that has a kind of electronic feel, and it is because she actually is a huge fan of Hello Kitty.

Having Avril backstage seemed appropriate too since Ed Sheeran spoke backstage earlier that he was a big fan of Avril Lavigne growing up, and more recently, Drake.

Mr. @classified and crew talking about the success of "Inner Ninja". "You can't lose with ninjas." pic.twitter.com/cGzJpDaaw6

Cody Simpson just left the press room, after Psy was here, and Cody revealed a bit about growing up as a pop star, and how he has to really think now before he posts anything on Twitter since he has such a huge following. He also said that, when it comes to vacation, he prefers just being home.

#MMVAs co-host @psy_oppa backstage reveals his debut album in North America will be out around September. pic.twitter.com/ANp2Fm7zaS

The guys from Marianas Trench just finished, and they are very proud to say that they think they topped Billy Talent, in terms of MMVA red carpet entrances.

Personally, I have to side with Billy Talent since I think the tank is still very hard to top, but Marianas Trench have been pretty awesome over the years. This year’s dunk-tank “mermaids” were maybe not the best they’ve done, but they were funny. My vote is they need to ride in on flying bicycles next year, but maybe that’s just my idea of fun.

Otherwise, I’ll be posting actual content, quotes, photos and video as fast as I can over the next day.