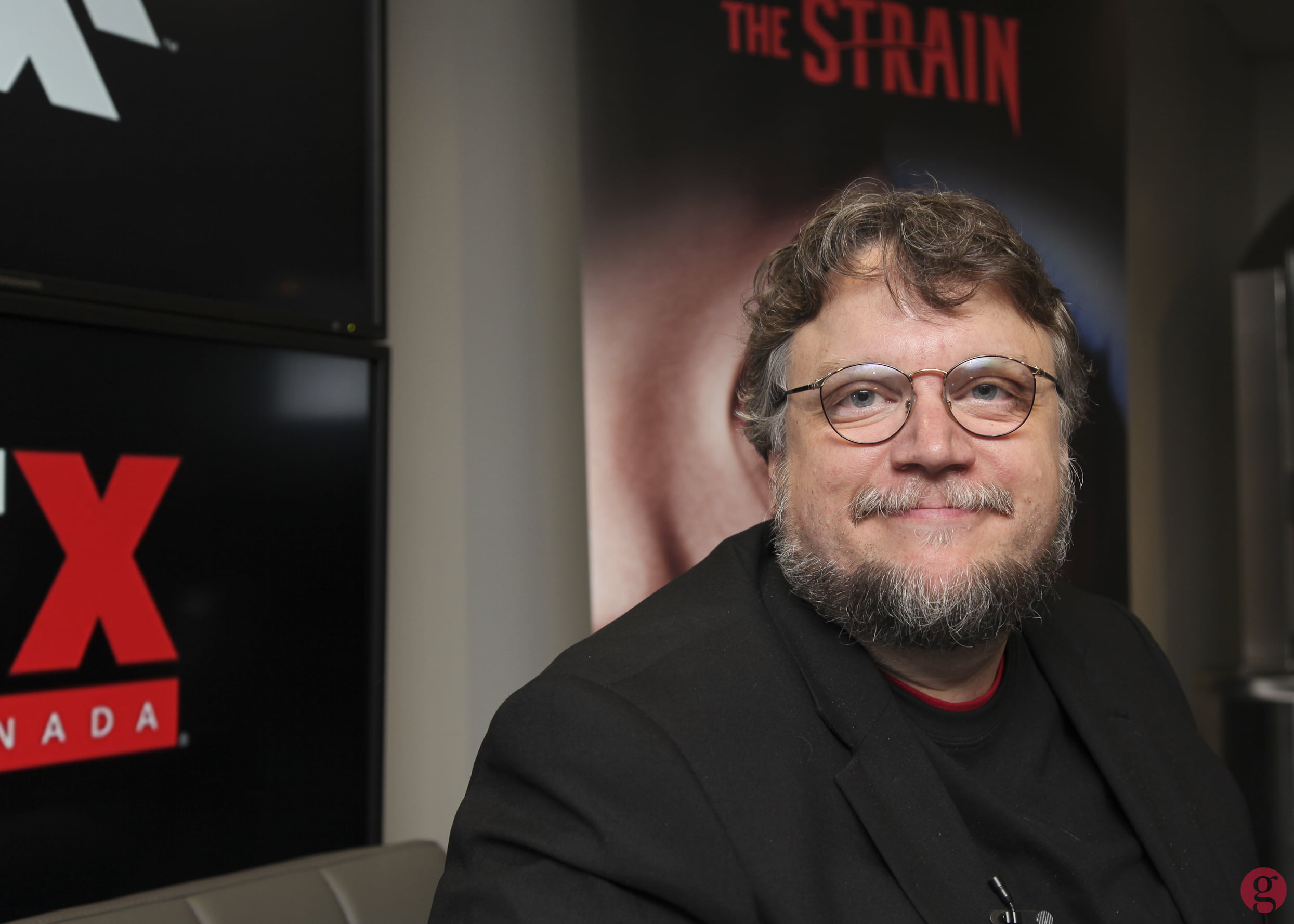 Upfront week in Toronto is all about television, as the Canadian networks announce the shows that will debut in the fall. It’s a busy week with interviews, press conferences, and what most people look forward to especially: big parties.

My day with Rogers started at the very reasonable hour of 11:00 AM, although I was a little late, but the timing was perfect since I arrived just before director/writer/creator/legend Guillermo del Toro stepped up to chat about his new series on FX Canada, The Strain.

Based on the books that del Toro co-wrote with Chuck Hogan, the series was shot here in Toronto with executive producer Carlton Cuse (of Lost fame) and it features a huge, interesting cast: Corey Stoll, David Bradley, Kevin Durand, Mía Maestro, Jonathan Hyde, and Natalie Brown, not to mention Sean Astin, and a number of others.

We got a nice, full-length trailer for the show, which made me feel fairly confident that the series is going to make it high on my must-watch list this summer. I also got to chat with del Toro quickly afterwards, and he was just a phenomenal guy to chat with. He also spoke at length during the event about his love of Toronto, and filming here, and I love his enthusiasm for talking about his projects.

Here’s del Toro talking about The Strain (shot from my cell phone) during the press conference:


The Strain debuts on July 13, and essentially follows an outbreak that threatens the world after a plane lands at JFK Airport in New York city with 200 dead people, and four survivors. As bodies go missing in the days following the plane’s arrival, epidemiologist Dr. Ephraim Goodweather, played by Corey Stoll, leads a small group who end up fighting to stay alive against an old, terrible threat.

After the press conference, I had a bit of a break to write, work on content, and eat the snacks Rogers had out before I sat down with actress Natalie Brown for The Strain.

Brown was smart, lovely, and fun to chat with, and she shared a few stories from set about working with del Toro and co-star Stoll. That interview, along with my interview with del Toro, will be posted in a few days, so stay tuned.

Otherwise, the big Rogers Upfront night took place on the field at Rogers Centre, which was also celebrating its 25th anniversary today. Here are a couple of shots from the field before and during the party:

#RogersUpfront draws a pretty big crowd onto the Rogers Centre turf. Presentation of fall line-up to begin at 5:30. pic.twitter.com/kX7rnFH2H0

Most importantly though, while there wasn’t a press event for the announcement, Rogers also revealed their schedule for City fall and mid-season, which includes Scorpion, Black-ish, Backstrom, and the new reality series, Utopia. I’ll post full details on those shows soon.

Returning series over the mid-season for 2014/2015 include The Bachelor, Brooklyn Nine-Nine, Hell’s Kitchen, The Middle, Mike & Molly, Modern Family, Parks and Recreation, Revenge, and Scandal.

More from Upfront week throughout the week.

Backing up a little though, I also wanted to mention that before the FX Canada panel, CBC quietly debuted their fall lineup and returns last week, which followed their big loss of Hockey Night in Canada to Rogers Media.

Since I was out of town, I missed that press day, which included people from the much-anticipated adaptation of The Book of Negroes, and stars from their other shows, including the new comedy Of All Places with comedian Jonny Harris, the Western Strange Empire, and the drama Camp X. That’s on top of returning series Dragons Den, Heartland, Mr. D, Murdoch Mysteries, Republic of Doyle, Rick Mercer Report, and This Hour Has 22 Minutes.