‘Lost’ time-travel madness in “Because You Left” and “The Lie” 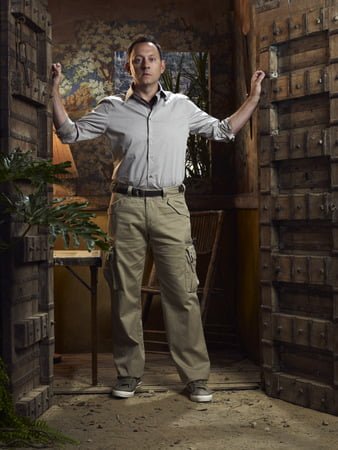 Lost returned to the airwaves last night with a double-header that actually provided a few, brief, answers. At this point though, the show seems to be dropping three more questions for every answer they can spin out of the space/time continuum.

Still, “Because You Left” and “The Lie” offered a brilliant return to form for the series, and gives a suggestion that the end isn’t far away now (producers previously told us, after all, that the show would end with the sixth season).

So what happened tonight? Here’s the gist of the story this season…

The more detailed breakdown follows after the jump, for the really obsessed…

The Island
» The show opens with a clock turning from 8:14 to 8:15 as a man gets up, takes care of his baby, and walks on set to film a Dharma Initiative video. It’s of course Dr. Marvin Candle who talks about “The Arrow” station before he is interrupted and taken to the Orchid, which is under construction, and is apparently experiencing problems. We’re clearly seeing the past.

Workers are inside trying to take out a wall of rock, but their equipment is being destroyed by the wall. Showing a scan behind the stone, we see the distinct shape of the wheel Ben used to move the island. Oh, yeah, and a worker is lying on the floor, seemingly mentally unhinged, with a bloody nose.

Marvin Candle then reveals that the purpose of the building is to tap into the limitless energy behind the rock, which may make it possible to time travel. He also suggests there are rules to time travel, and they shouldn’t break the wall or it could release all of the energy.

As the good doctor leaves he bumps into Daniel Faraday, the scientist from Oxford who seems to know a lot about the Island, and is apparently time traveling.

» We jump back to the group in the dingy who were leaving the island as Benjamin Linus turns the wheel to move the island. We see the flash of light, but as John Locke orients himself, Dan and the people on the dingy discover they are still near the island. On the beach, Sawyer and Juliet try to figure out what just happened and head back to the camp site with the group from the dingy in tow, when they discover that all of their tents and supplies are gone. Dan explains that things have changed and they need to get to a permanent structure.

Walking through the jungle, Dan soon explains that whatever Ben did has caused the island to be dislodged from its normal place in space/time. That, or the group of survivors have been dislodged from the space/time of the island. They are now in the same place, but a different time when their gear wasn’t on the beach.

» John Locke is elsewhere, and witnesses the crash of the drug plane with Mr. Eko’s brother. Ethan is near the plane and shoots John when he starts climbing up the tree. As Ethan is about to kill John, the world flashes (a very Quantum Leap moment), and it appears that John has escaped once again.

When we come back to John, he is laying bleeding, and realizes he is back to long-after the plane crashed. Richard approaches, prepared for John, and starts to fix him up giving him instructions for what will come next for him. He gives him a compass for John to show Richard when they meet again in another time. Richard also tells John that he needs to bring everyone who left back to the island, and the only way to do that is to die. Time changes.

» We’re then back with Dan‘s group as time changes and they are now around the hatch, which is restored to how it first appeared to them on the island. Sawyer wants to go into the hatch and get supplies, but Dan says he can’t because Desmond never meets Sawyer until much later and they can’t change that. It’s one of the rules of time travel.

Interestingly enough, Dan sends everyone off and gets Desmond to come out. He manages to tell Desmond that he has to go and find his mother in Oxford when he remembers this.

» Back in what I can only present day, Desmond wakes up and remembers Dan’s message and tells Penny they have to go to Oxford.

» On the island, Dan arrives on the beach two hours later and says he has to determine where they are in time so they can decide where to go or what to do next.

It’s also worth mentioning that Charlotte has a nose bleed near the hatch, and while she is talking to Dan on the beach, mentions that she finds it odd that she can’t remember her mother’s maiden name.

Jump ahead to the second episode, and the group are still on the beach trying to make fire. Ironically enough, the group is shortly attacked by a storm of fire-tipped arrows arcing over the treetops, cutting down a random number of survivors on the beach.

Everyone runs and Sawyer and Juliet hide out, only to be captured by men in uniform. Locke comes to the rescue though and helps the two escape.

America
» Meanwhile, in “Because You Left,” Jack and Ben are talking over the body of John Locke (aka Jeremy Bentham), discussing what has to happen next. Between this scene and another in a hotel room, Ben says that they will have to gather everyone who left the island and go back. Jack also tells Ben about the conversation he had with John on the island before they left.

» We then catch up with Kate, who is at home with Aaron when a lawyer comes to her door demanding a blood sample to prove she is Aaron’s mother, for the benefit of his client, who he won’t name. Kate tells them to go away, and when they do, she grabs a few things and runs away with Aaron.

» Sun is at the airport checking when she is detained. In the detention room, Charles Widmore shows up, angry that Sun bothered him before. When he asks what they could possibly have in common, Sun says killing Ben Linus.

» Hurley is with Sayid, and they’re headed to a “safe house” but people are waiting inside. Sayid kills both men, but people come on the scene and see Hurley with a gun near a dead body and assume he killed the man.

» Jumping to the second episode, the group who left the island are on the boat and deciding what to do once they are back in America. Led by Jack, who thinks they need to lie to protect the people on the island from Widmore, they seem to agree that they can’t tell the truth, except for Hurley who doesn’t want to have to hide the truth. Sayid backs everyone else up, and Hurley says, “I’m going to remember this. And someday you’re going to need my help and I’m telling you right now, you’re not getting it.”

» Back in the “present”, Hurley is driving with Sayid, who is unconscious after he was shot with a tranquilizer during the fight. Hitting garbage on the side of the road, a cop siren wails behind them and Hurley pulls over and prepares for the worst. Anna Lucia then walks up to his window, dressed as a cop, and tells him to be more careful and go take care of himself or else he won’t be able to do what he has to do. She also tells him, “Oh yeah, Libby says hi.”

Hurley stops at a store to buy a change of clothes and pulls out of the parking lot as Kate pulls in gets a call from someone who asks to meet her.

» We get a quick scene where Jack is looking for his collection of drugs, but Ben says he’s disposed of them, and says he’s will be back in six hours, he just has to go put John’s body somewhere safe. To which Jack asks, “Safe? He’s dead, isn’t he?”

» Cut back to Hurley, who appears at his parent’s house with Sayid still unconscious. They talk and discuss options, and Hurley comes up with a plan. When we come back to them, Hurley’s father drives Sayid away from the house to meet up with Jack in a garage. Jack takes Sayid from him and plans to take him to a hospital while calling Ben, telling him what just happened.

» Meanwhile, Kate arrives at a hotel with Aaron and goes up to the top floor (the 31st) where she meets Sun. Again, when we catch up with the three again, Sun tells Kate that her daughter Ji Yeon is with her grandmother in Seoul. Sun then discusses the final moments on the boat with Kate, when Kate essentially saved everyone, but left Jin to die. Sun says she doesn’t blame Kate, and after a few tears, the scene ends.

» We then see Ben at a meat store as he asks the woman behind the counter to take care of John’s body. She also tells Ben that things are moving according to plan. Ben, oddly enough, also defends Jack when the woman belittles him. Ben also tells her to keep John safe or else, “everything we’re about to do, won’t matter at all.”

» Back at Hurley‘s parents house, he reveals everything to his mother, who amazingly, believes him. (The truth will set you free?) Hurley wonders if all the bad things are happening because they lied.

» Sayid awakes in the hospital disoriented, choking Jack. It isn’t long before Sayid asks Jack if anyone knows where Hurley is…

» Ben then shows up for Hurley and tries to convince him to go back to the island. Hurley freaks out though, and runs out and gets himself arrested by, as I said before, what we can only assume are the real police. Ben goes back into the house.

» Finally, we see a figure in a hooded outfit working on a computer as a huge pendulum swings across the floor. She goes upstairs to a church where Ben is waiting. As it turns out, it’s Ms. Hawking, the woman who met Desmond in the past and told him that he couldn’t change history.

Ms. Hawking explains to Ben that he has 70 hours to get the group back to the island, or “God help us all,” but Ben isn’t sure there is enough time.