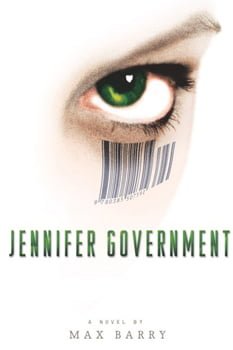 A couple of interesting things came to my attention today, and they all revolve around writer Max Barry.

Barry is of course the amazing author who wrote one of my favorite books, Jennifer Government, a satirical story about a dystopian-type alternate reality where corporations have become their own nations within the world’s weak political climate.

I just happened to be checking out Barry’s website, when I discovered the first cool item of the day. He announced recently that he’s going to start a daily online serial called Machine Man. Starting on March 18 he will release a new page every day through his website, RSS feed, and via email.

No word yet on what the story is about, but I have to say it: the man has style.

“I’ve never loved the idea of reading a novel online, because novels aren’t meant to be read that way: they are designed to envelop you. Anything I see on the web, by contrast, I give my attention for a maximum of eight seconds before checking Reddit for videos of laughing dogs…”

“So rather than trying to shoe-horn a novel into a web-friendly format, I thought I’d write you a real-time serial.”

“I say ‘real-time’ because I will write it as you read it.”

The second item came further into Barry’s site, and it’s actually a two-parter. First of all, Jennifer Government was optioned by Warner Bros. with Steven Soderbergh’s Section 8 set to make the film. That deal died at the end of last year though, with the film rights reverting back to Barry, but I can’t help but hope someone else will come along and save the day.

(Mind you, I’m also still waiting for someone to make the Ender’s Game movie, and while there have been advances on that side, I still won’t hold my breath.)

But the real zinger concerning Warner Bros. is Barry’s awesome rant about the fact that the studio locks DVDs from playing on computers. The idea from the studios point of view, it would seem, being that computers are somehow evil or intimately connected to piracy in every home across the planet.

“Now, I understand that home theater PCs are kind of new-fangled, Warners, and not everyone wants to watch their DVD on a computer or laptop. But some of us do, more every day. I think you need to get over the idea that PCs are just for pirates.”

I’m not going to quote any more of this one, because I think it does a disservice to just sample it, so I’d recommend you go read it on his site.

The sad part is that, while most of us are frustrated by this “old fogie” approach by the studios, all the complaints in the world probably won’t mean a damn thing to the people who make these policies.

Which is why, I’d venture, downloading movies has become a hobby practiced quite far and wide. People are frustrated, and much like the days when the music industry started feeling the effects of the Internet, the film industry is now facing the harsh reality of a business model that no longer works very well because it is ignoring online distribution.

That said, I’m still not sure the rash of downloading movies actually hurts the industry, but it sure makes the studios look stupid, and no laws or legal action will change that.

And please, I’m not saying it’s good for anyone to download, but there is something a little funny about imagining how Warners would deal with pirates in the world of Jennifer Government.

P.S. I really want to build Barry a new website. It’s charming, but a tad ugly all the same.