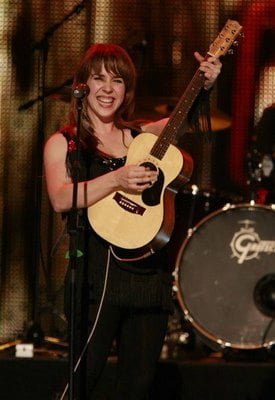 Okay, it’s the final run for this year’s Junos and I’m running out of steam. This show is dragging me down, down, down.

While I fight with my urges to change the channel, Simple Plan perform “Your Love Is A Lie”, which is actually what I might call the dullest performance of the night. That kind of shocks me a little, considering these guys are pretty cool, and they usually rile up the crowds. Not so much tonight, but then again, they were kind of shoe-horned into this non-moment in the show.

Russell Peters introduces the Canadian Olympians, with two of them setting the stage for Byran Adams, who sings “Walk On By” with the loverly Kathleen Edwards. Adams stumbles a little, but these two make a great duo, with Edwards on violin.

I can’t help but think though that this has been a really folky night for the Junos. No big alternative performances, no rap or real R&B to speak of, which just makes me think that Kardinal Offishall really needs to get his wish for next year, at least in part. Ninety percent rap might be a bit much though, how about 25%? That’s better than 0%.

Sam Roberts wins for, wait for it, Artist of the Year, which is really funny. I think Roberts gets pretty peeved every time this comes up, and on stage he points that very fact out: Sam Roberts is really the Sam Roberts Band. You really have to feel pretty bad for these guys who get this all the time. I remember being at a press room event where photographers tried to get the band out of the shot, and of course, Roberts refused.

Adding insult to injury, the band tries to play them off the stage when they over-stay their welcome, so only Roberts managed to say anything. Come to think of it, I don’t think I’ve ever heard any of the other guys speak at all…

Dianna Krall and Elvis Costello are up next, handing out the final award for Album of the Year. Krall immediately proves that she’s not very good with scripted content, but Costello works his lines pretty well, which is of course a good thing if he’s doing this CTV variety show.

Anyway, as anyone could probably predict, the wankers Nickelblah win the award, beating

“The press are gonna hate this tomorrow,” Chad Kroeger mutters. As they try to fit in as many thank-yous as they possibly can, the band starts to thankfully play them off so that Great Big Sea, Hawksley Workman and Eccodek can close the show.

The guys are, interestingly enough, covering Led Zeppelin’s “Gallows Pole,” which is an odd choice, but works out pretty well for them. It’s a foot-stomping, explosive performance, that certainly book-ends Nickelback’s opening song well, but is infinitely better. Weird, maybe, but better.

All told though, they certainly pulled Russell Peters back a bit this year. He really didn’t do that much, although that seems to be a trend. There weren’t even any real skits to speak of, aside from the mini-one with Michael Buble.

So, the only memorable bits are the performances, and all I can think is, aside from Dallas Green and Gord Downie, were any of the others really that good? Passable, yes, but not outstanding in any way. Think back to K.D. Lang covering “Hallelujah” in Winnipeg, and they’re all pretty half-hearted by comparison.

Aside from that, I’ll leave the Nickelblah bashing to someone else. All I can say is that the Junos need to recognize better musicians than them. If all you want to celebrate is commercial appeal, maybe that’s why the show is so boring? Ratings be-damned, go with something interesting next year, okay? Newfoundland has enough spirit that surely even CTV can inject some of that vibe into the show.

What do you folks have to say about all this?