TIFF 09: A peek at the Canadian press conference 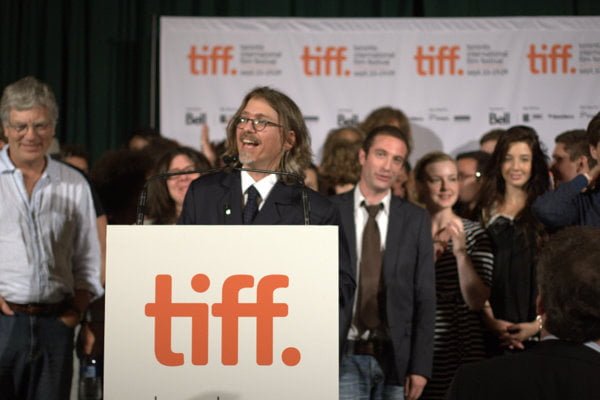 As my last post confirmed, this is indeed my favorite time of year, hands down. That’s because I just got back from the Canadian press conference for the 2009 Toronto International Film Festival, which takes over the city from September 10 to 19. It’s like Christmas for film fanatics like myself, mainly because it gives me a chance to dine on my love of film for ten straight days, and meet a number of cool filmmakers who will be debuting their latest films.

Today’s press conference was packed with a number of filmmakers I admire, and a long line of films I’m dying to check out. It was also a great chance to catch up with some folks I only seem to see around this time of year, like actress Kristin Booth, who once again appears in two films this year: Crackie, and Defendor.

In terms of the films, I’m going to write a bigger news piece on this, but to tide you over here’s some of what I found out today.

Quebec director Jean-Marc Vallée will debut The Young Victoria, which gets the honour of closing this year’s festival. The film is a period drama that looks back on Queen Victoria as she took the throne in 1840, but also covers the appropriate concept of becoming an instant celebrity.

However, there are two films I really want to talk about, mainly because I adore the directors and think the ideas sound incredible.

Rob Stefaniuk was the hit of the festival a few years back when he debuted Phil The Alien, and this year he’s back with the “rock’n’roll vampire spoof”, Suck. Starring Rob as the lead singer of failing band The Winners, the story gets weird and wonderful when the band finally finds success after their bass player, played by Jessica Paré, is turned into a vampire. Other stars include Malcolm McDowell as Van Helsing, Dave Foley as the band’s manager, plus cameos by Iggy Pop, Alice Cooper, Henry Rollins, and Moby.

Meanwhile, there is Ruba Nadda‘s film, Cairo Time. I first interviewed Ruba when I started The GATE and was distributing it as a zine, so it’s seemed very appropriate to catch up with her once again at TIFF. Nada debuts her new film which stars Patricia Clarkson as Juliette, a magazine editor who travels to Cairo to meet her husband, but finds herself falling in love with both the city and her guide, Tareq, played by Alexander Siddig.

More to follow on this year’s festival, but I had to pass along a bit of the news right away. Thanks as well to all of the fantastic PR folks who make covering TIFF a wonderful, action-packed adventure.