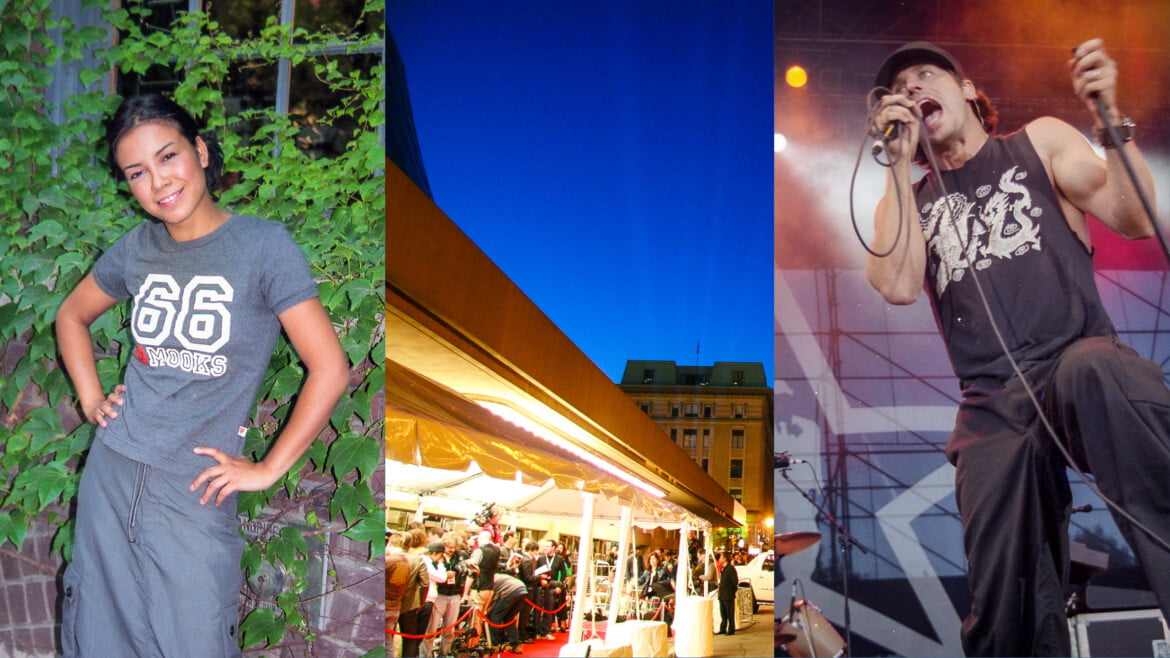 When The GATE started out, the biggest film of the year was Harry Potter and the Sorcerer’s Stone, and the iPod had just launched. To put it mildly, it was a very different time, especially when it came to the media.

Most people got their news from newspapers, magazines, and television, but it felt like the start of a digital revolution, and I really wanted to be part of that.

I was drawn to create The GATE because I’ve wanted to be a journalist and a photographer ever since I was in high school. I hoped that I could find a career somewhere–maybe at a newspaper or a magazine–but this website took on a life of its own very early on. Since I’ve always been a huge fan of movies, music, TV shows, and tech (I’ve been watching the Oscars since I was probably 8 years old), the site has also evolved to feature all of my favourite things, year by year.

My career really began when I started reviewing music and interviewing bands for The Ontarion, the on-campus newspaper at the University of Guelph. It was an incredible learning experience, and it also gave me the chance to shoot concerts and sports. It was a small taste of what being a writer could be. I volunteered at the newspaper the whole time I was at university, and it made me realize how much I wanted this to be my career.

Jump ahead a few years, and I was living in Toronto, volunteering at Chart magazine, Canada’s only music magazine in those days. I was lucky to be there when a ton of journalists–people still working today writing about music and entertainment–were there, but it didn’t completely fit what I wanted to do.

That’s when I started writing about music and entertainment in Toronto for myself. I built a little website, and my first interview was with Emm Gryner for her album Stereochrome. We met downtown and I snapped a few photos on the corner of Queen and Spadina. A few weeks later I had a phoner with Sarah Slean, and opportunities kept snowballing from there.

In 1999 and into 2000, I published The GATE as a zine that I put together in Word, and then photocopied and dropped off at bars and restaurants in downtown Toronto. It was a passion project, and my hope was really to get people to visit the website, but the site was still really basic.

For the most part, I was writing about music, and I just wanted to feature as many up-and-coming artists as I could.

Everything changed in January 2001. For the first time, .ca domain names became available to Canadians, and that’s when I launched TheGATE.ca.

It felt like a major win at the time when I started getting pitches for interviews, and not long after I started writing movie reviews, I applied to attend the Toronto International Film Festival and I ended up getting accredited. That was such a big deal to me, it’s hard to explain, and it was around the same time that I started publishing other people’s work on the site.

Going out to concerts, and covering TIFF, I was shooting film, getting negatives developed and then scanning them to share on the site. I shot on film until 2003, when I got my first Sony digital camera, and not long after that I started shooting video with a digital camcorder. There was no Twitter or Facebook, and MySpace was just getting started.

The next innovation though was getting into video. Let me tell you, it’s hard to appreciate now, but when I started out, it was a lot of work. After shooting anything, I had to download the video in real time to my middling desktop computer, edit it, and then upload the “huge” file to the website. And by today’s standards, it was basically the size of a thumbnail video, but not many websites were doing it.

Video led me to some amazingly cool opportunities, and it’s one of the best decisions I’ve made over the years. I interviewed The Proclaimers, and I went to the 2002 Molson Indy Toronto, and in 2003 I got to sit down and interview Billy Boyd and Dominic Monaghan for The Lord of The Rings: The Two Towers. I was even starting to cover television, and got to sit down with cast members from Scrubs, not to mention the great John Ritter for a few minutes.

One of the highlights of my career came around the same time at TIFF 2022. For 15 minutes I sat down with the great Bruce Campbell for an interview about his film Bubba Ho-Tep, and then director Don Coscarelli joined us for another 10 minutes.

That year I also started covering more things, including gaming on the PlayStation 2. I was working a day job, and I’d have to take breaks for phoners sometimes, or go out for an interview on my lunches. When I got home, I’d work for hours on new stories (that hasn’t changed in all these years), and every month, I would get piles of CDs to review in the mail, and I was going to a concert or two a week, usually, to review and take photos.

By 2004 I was covering more tech, including Xbox games, and I was reviewing DVDs and movies. More people had also come out to write for The GATE, and every chance I got, I was interviewing anyone who would sit down with me.

Another highlight came later that year. I vividly remember a screening for Shaun of the Dead in Toronto at the Varsity cinema with Edgar Wright, Simon Pegg, and Nick Frost in attendance. At the end I went up to them and just acted like a complete nitwit because I loved the film so much. They were incredibly gracious.

The GATE has always been a ton of work, and it’s never really paid that well, but every little win was a big deal. It was like serotonin right into my soul. I got to chat with amazing people, and review interesting things, and people actually invited me to do more, and more.

Every year I was covering the Juno Awards, Canadian Music Week, North by Northeast, TIFF, the MuchMusic Video Awards, and by 2005 I was on version 3.0 of the site.

I launched two syndicated weekly columns that also ran in print–Film Friday and DVD Tuesday–that ran for a number of years, I started covering travel and went to E3 in L.A. and then CES in Las Vegas. There was always–and I can probably still say this today–too much going on, but I wouldn’t change much over the years.

And for all the reviews and everything else that I ran, it always came back to interesting interviews for me. That was the lifeblood of what I wanted to create, and a way to focus on great people making amazing things.

Since I started, I’ve probably said it either too much or not enough, but I wouldn’t be here without a ton of people along the way. Publicists and teams who invited me in for interviews, gave me a chance to do reviews, and helped me turn The GATE into something bigger and bigger each year.

I interviewed Josh Hutcherson and AnnaSophia Robb, Tom Felton, Beau Bridges, director Kari Skogland, Brent Spiner, Adam Devine, and both Edgar Wright and Ellen Wong for Scott Pilgrim vs The World. I got invited to sets, and then the biggest change for me was seeing video become the biggest thing I was doing.

Up until about 2010, photos had always been a huge focus for the site, but when people agreed to video interviews, it led to more views, and more offers for interviews. In 2011 I started The GATE’s YouTube channel, and I was very lucky to have a ton of fans start watching and following almost from the start.

It’s probably pretty safe to say that covering Lost Girl, with their amazing fans, and the show’s incredible cast, team, and publicist (who all gave me so much to work with), were a big reason The GATE’s YouTube channel took off. Those videos alone brought in over 300,000 views over the years.

Over the 20+ years I’ve been lucky to be accredited at some of the biggest events in North America, I’ve had amazing interviews, and I never imagined where any of this would lead. I honestly think that if I spoke to myself in 1999 today, he wouldn’t believe what’s come from it all.

There’s too much history and moments to cover in the last 10 years, and even when things were tough, I have felt very fortunate to have this publication to cover the things that were important to me. That will never change, and I hope that the future of The GATE is simple: hire more and more writers to write and talk about the incredible talents working today in film, television, and in music. Especially when those talents are Canadian.

My goal for the next 10 years is make sure that The GATE helps share rich and diverse stories, and gives writers and journalists and space to be creative. I want to create work for more writers, and I want to make opportunities to tell stories I’ve never had the chance to tell before.

Over the next few weeks I’m going to share memories, highlights, and restored videos and photos from the first 20 years of The GATE.

I also want to thank every reader who’s ever been there for The GATE. I’m grateful for all the support, and it’s an honour to still be doing this after 21 marvellous, astonishing, fulfilling years.