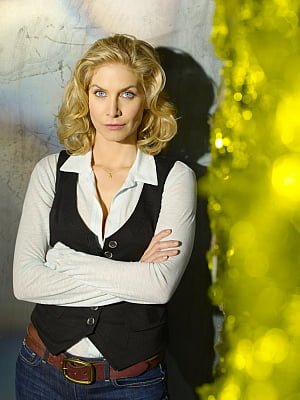 At the start of 2009 I was pretty disappointed in CTV. They were the original Canadian broadcaster for Lost, but for whatever reason they decided to dump the fifth season over to their cable station, A, out of Barrie. My problem being I currently abstain from the whole cable fiasco, so couldn’t watch the show when it aired on TV.

Well, I thought it was worth mentioning that CTV has apparently come to their senses for 2010. While I can’t find a source on this yet, the station ran a promo during last night’s premier of V that announced that Lost would indeed be back on CTV in January.

The move is hardly daring at this point, considering it’s Lost‘s final season, but it is a great sign considering CTV is also airing V, another show that is certainly outside their normal comfort zone of cop shows and, well, more cop shows.

And that brings me to V, the remake of the original 80s series (actually, it was a mini-series and then a series), which I caught last night – at least partly because of Elizabeth Mitchell (who played/plays Juliet in Lost), Joel Gretsch, Laura Vandervoort, and well, Alan Tudyk.

My memory of the original series is dim, but it looks like the show is moving in the right direction. The first episode was a little flat, and needed to be a lot creepier if you ask me, but it ended well, and it’s hooked me enough to tune in one more time to see what they can do with the premise. I’m not dying for the next episode (the way Lost hooked me, for example), but I am very curious.

If you missed it – well, too bad – CTV doesn’t have it on their website for viewing. I’m sure it will air again, but here’s the premise (spoilers below, friends): The “Visitors” arrive in massive ships, hovering above a bunch of major cities. They look like us, except all of them are way too good looking to be real. These “V” try to earn humanity’s trust, give us these stations that can heal people, and then start opening local chapters to promote how wonderful they are. At the same time Elizabeth Mitchell’s character, Erica Evans, is an FBI agent investigating a terrorist cell that suddenly got a lot more energetic when the “V” arrived. Sneaking into a word-of-mouth meeting, which seems to be linked to the terrorist cell, she discovers that the “V” have been on Earth for years now, spreading chaos so they could someday swoop in and look like the heroes. She also quickly sees what the V look like when they don’t have their human skin on…

We’ll see how that show turns out, but otherwise, in terms of Lost, as long as I wasn’t hallucinating last night I’m psyched to see that show back on CTV, and I’m glad they’re also taking a chance on V. The sooner they can bring some diversity back to their lineup, the more I’ll be tuning in.