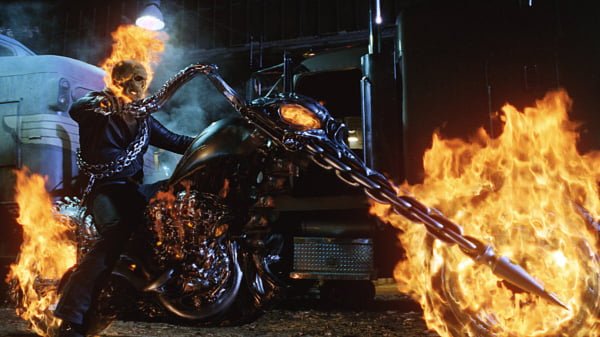 “Best. Ever.” is a weekly conglomeration of things that made my week. And there was much rejoicing. This week, Ghost Rider 2 will be moody, the Oscar hosts have been announced, two of my new favorite games, Google’s Dashboard, and Max Barry’s Machine Man goes to Hollywood.

The first Ghost Rider film was… okay. It was ultra-cheesy at times, but it actually doesn’t suck. Still, I’m thrilled to hear that David S. Goyer (the guy who produced the first film), plans to make a sequel that will redefine the mood in a big way.

Set eight years ahead of the original film, it will be “a bit more stripped down and darker,” he said. “It’s definitely changing tone. What Casino Royale was to the Bond movies, hopefully this will be to Ghost Rider.”

The only annoying part of the plan is that Goyer announced last month that the film will also be toned down from an “R” rating to “PG-13”.

I am absolutely thrilled to hear that the Academy Awards are going to be hosted this year by none other than Steve Martin AND Alec Baldwin!

It just doesn’t get much better than that. Two of the best hosts from Saturday Night Live together doing one of the only awards shows I watch (and look forward to) every year.

If you’re curious, this also marks the first time since the original broadcast in 1929 that two people have hosted the Oscars on the same stage. That original broadcast was hosted by Douglas Fairbanks and William C. DeMille – obviously, kind of a tough act to follow. I just hope they give the duo a decent amount of stage time.

Pick up a controller this month, and aside from the Grand Theft Auto add-on, The Ballad of Gay Tony, you have to check out the new Activision title, Band Hero, and the racing sequel, Forza Motorsport 3.

On the musical side of things, Band Hero has a lot of funky new changes that have improved on the Guitar Hero World Tour setup. For one thing, you can literally pop in the game and start playing a song from the first screen. No fiddling with avatars or anything (unless you want to, of course). The Party Play mode also lets you play every available song – no need to play to unlock tracks if you just want to let loose with friends. It’s totally filled with pop-centric songs, but that’s why it’s so fun.

Oh, yes, and there’s lots of Taylor Swift in the game, if you care.

For Forza Motorsport 3, the big surprise to me is that I love playing the game. I normally hate racing titles, but Forza 3 is customizable, whether you’re a pro racer or an utter n00b like myself. There are also over 400 cars, from pretty much every manufacturer, so half the fun is unlocking new models to race.

What’s this? Google Dashboard is a “Best. Ever.”? Well, yeah. If you use Google services at all, it can be a bit stupid trying to manage all of those accounts, but this page gives you access to change things you’d normally have to hunt for. Jump in to edit you YouTube.com account, Picasa web albums settings, manage Gmail, or edit your calendars.

Max Barry, the writer behind the amazing novel, Jennifer Government, revealed today that Mandalay Pictures has optioned his Machine Man story. Anyone with me on wanting to celebrate this?

While I wish we could see a Jennifer Government movie first, I’m still excited by the prospect of anything by Barry making it to the big screen. Barry himself admits this is just the start of development, “And as we have learned, sometimes painfully, movies in development often do not make it out of development, at least not in our lifetimes,” he wrote in his blog. “But still! This is a pretty amazing thing for a not-quite-finished experiment in fiction.”

For those who don’t know, Machine Man is an interesting concept in-the-making. It’s not actually what you would call a novel, either. The story is about a scientist who begins upgrading himself with manufactured parts, but Barry is writing the story page-by-page, and delivering each piece by RSS.

Hopefully, Machine Man will do well, which will then get some of Barry’s other stories moving onto screens as well.