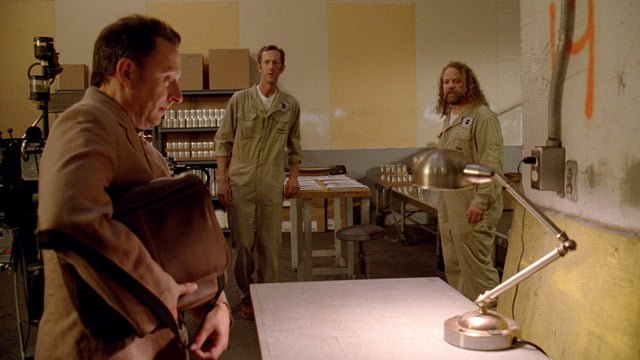 Lost has been over almost three months now, and yet as a fan I can tell you I still randomly think of the show and wonder about some of the questions I still have.

Well, leading up to the release of the complete collection on DVD and Blu-ray later this month, someone has gotten their hands on the 12-minute epilogue, “The New Man In Charge,” and you can watch it right here.

Starring in the short are Lost regulars Michael Emerson, Jorge Garcia, and… who’s that? Malcolm David Kelley as the one and only Waaaaaaaaalt.

Check it out for a few answers, some more questions, and in all likelihood, some sort of lead up to the spin-off that seems all too likely.

I can give you a quick rundown of what happened though.

Benjamin Linus (Michael Emerson) walks into a shipping room in Guam with two guys who are packing Dharma boxes with various labels and tells them that their job is done and they can close the place down and go home.

He says he’s from the “home office,” but they look confused and say that “Nobody from the home office has ever come out here.” He says there’s a new man in charge and he’s been sent to tie up a few loose ends.

The guys are upset and don’t understand what’s going on — they’ve been sending shipments of food out on “drones” for years with no interruption — which is when Ben tells them that Dharma has been gone for almost twenty years, the Lamp Post station in California hasn’t been manned in years, and all of their instructions they received have been automatically sent out from a computer. In other words, all the shipments dropped on the Island were just routine.

To calm them down Ben promises to answer one question each. One guy wants to know where the shipments were going. Ben tells him to an island, and the guy asks how that’s possible when the coordinates keep changing. Ben answers that the Island moves.

The other guy wants to know why they’re shipping polar bear cookies to an island that seems to be somewhere in the tropics.

Ben shows them both a Dr. Chang orientation video that helps explain that there were tests on the Island and animals were used in these experiments. Dr. Chang briefly mentions in this video that electromagnetism near one of the stations had very negative effects on pregnancies.

After he leaves the two dumbfounded guys, Ben goes to the Santa Rosa mental health institution and asks to see “Keith Johnson”… it’s actually Walt. Walt is playing the game Connect Four and asks if Ben is there to abduct him again.

To this, Ben apologizes and says he’s genuninely sorry, but “What’s done is done. I can’t change the past, I can only take responsibility for it.”

They discuss that Walt has had a hard time, pretending he’s someone else, and Ben wants to help him because he’s special and has work to do — including helping his father.

Walt says, “My father’s dead,” to which Ben replies, “It doesn’t mean you can’t help him.”

Ben invites Walt to go with “us” and hands him a Dharma granola bar. They leave the hospital and go to a blue Dharma van parked outside, which has Hurley inside. Walt says he always hoped someone would come back to find him since he thought he was crazy, but Hurley says he just needs to get back to the island, which is where he belongs because he has a job to do there.

Fade to black, and then the words “Lost” appear on the screen in white, just like they always did.