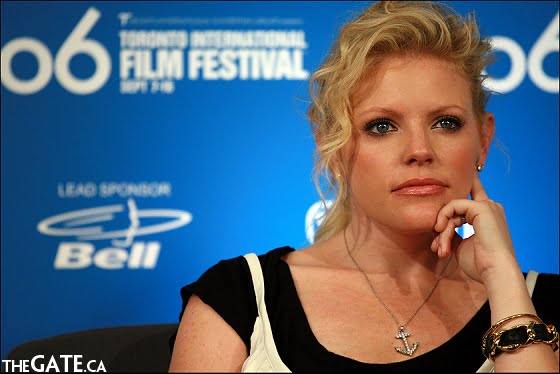 Last night’s gala for Dixie Chicks: Shut Up & Sing was a pretty great event. Apparently it’s the first documentary to get the gala treatment in some time, and the turnout of Dixie Chicks fans made their presence known. I really enjoyed the film – even though I don’t own any of the CDs, and I haven’t seen them live, I am a fan of their music and the movie is filled with performances. About the only thing missing from the movie might be an emotional statement from frontwoman Natalie Maines, who came off as a real firebrand, but didn’t really offer up her emotions on the events.

I also loved hearing about how they’ve stood strong against the American idiots who turned on them – it’s an emotional topic, and you can only imagine how hard it must have been, especially when the comment was rather flippantly offered up in the first place.

With that movie still fresh in my mind I decided I had to hit today’s press conference and had the amazing chance to listen to them all talk about what motivated the film, how they took it as the filming was happening, and how the two directors (Barbara Kopple and Cecilia Peck) got involved.

I was liked reading your blog but when I got to this now I’m not going to read anymore.. I have to say is, The reason why A lot of Americans don’t like them anymore because when you go to watch a concert, all you want to hear is MUSIC! not someone talking about political crap. that’s why they lost a lot of fans and they are not on TOP of country music anymore. They killed there career, like Britney spears killed her career when she married to K Fed, She was on TOP now she’s just Trash just like Dixie Chicks.

I’ll honestly agree with you on wanting to hear music rather than a musicians opinions, but there’s a huge difference. The Dixie Chicks were flat-out censored in their own country, and that’s not something anyone should take lightly. As far as readers are concerned – I don’t expect everyone to agree with me all the time – and you’re going to exist in a pretty small world if all you read are like-minded individuals.