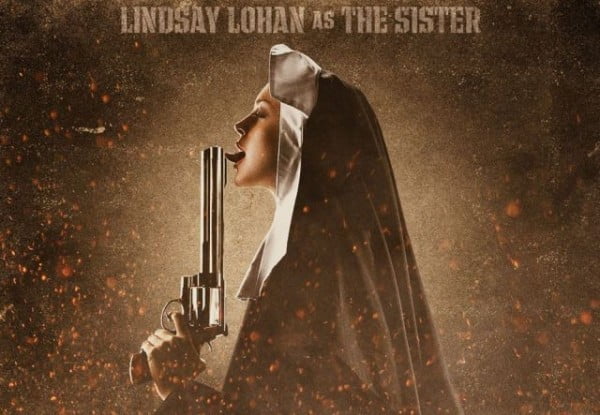 Lindsay Lohan as the Nun in Machete

Thank you, Ethan Maniquis and Robert Rodriguez. After months of lead-up I finally got to see Machete last night and it was definitely kick-ass.

Not perfect, mind you, but bloody funny all the same.

The bullets flew, the blood splattered, and Machete took care of business with a grim face and witty lines. Plus, it doesn’t hurt that there was some skin, and Rodriguez knew how to pick his feature ladies.

Out of all the cast, Michelle Rodriguez as Luz was hands-down the most memorable, but I really did enjoy Jessica Alba as the slick agent Sartana.

Lindsay has no real part to speak of, she’s only in the film a few minutes, and she barely acts at all, but did I mention she appears nude in the film?

Yeah, it was a bit of a surprise. One minute you’re expecting her to be coy and the next she’s naked in the pool. And if that wasn’t good enough she’s back near the end for a closeup before she dons the nun outfit from the promos.

Slow down though, fan boys. Before you start lining up, I think it’s more than a little possible that Robert Rodriguez played a little trick on fans.

In some recent interviews Jessica Alba admitted that her one shower scene, where it looks like she’s naked (but not facing the camera directly), was actually a digital effect. She shot the scene in underwear and Rodriguez’s digital effects wizards removed the clothes in post production.

So, once you see the scene with Lohan in the pool, I think it’s safe to say some wizardry was at work there as well. The woman in the pool who is supposed to be Lohan doesn’t really look much like the real Miss Lohan.

Jump ahead to one of Lindsay’s final scenes though and Lohan gets up from a couch, naked, and walks toward the camera. The difference is that Lohan is somewhat hiding behind her hair — at least briefly — but it also looked real this time.

So, I’m confused. First of all, why did Lindsay even do this movie — just for a nude scene? But, I also don’t get what was going on — Lindsay looks completely different in the two scenes, so either it was a weird film effect, or she just refused to do full-frontal, but agreed to do something coy?

All the same, if you’re going to Machete to see the nudity, you’re totally missing out. Machete is a damn cool movie, with a decent message about American immigration too, and while the nudity sells the film as a modern exploitation/action mash-up, Rodriguez sells the film with genuine movie mojo all the way through.

With the Labour Day long weekend ahead, I also can’t think of a better way to herald the end of blockbuster season.

The movie came after interest in the fake Grindhouse trailer. Rodriguez put all of that footage in the movie. So some of Lindsay is the other actress from years before in the trailer. That’s done with all the scenes from the trailer, not just Lindsay.